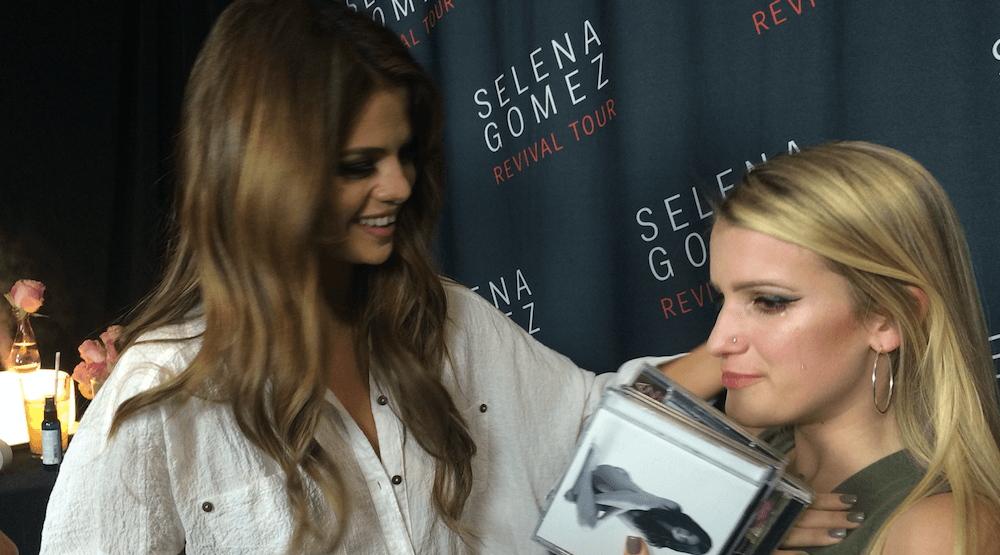 Melissa Powell got to meet her idol Selena Gomez, thanks to the Children's Wish Foundation (Submitted)

For 15-year-old Melissa Powell, dealing with Cystic Fibrosis has not been easy.

The teen from Maple Ridge, BC, has had her fair share of hospital visits since she was diagnosed with the disease at five months old. The illness mainly affects Powell’s lungs and digestive system, making it difficult for her to breathe and absorb fat from proteins.

To deal with the tough times, Powell does what many other teenage girls often do; she blasts the songs of her favourite artist, Selena Gomez.

“I have looked up to her ever since I was probably eight-years-old,” said Powell.

Last summer, Powell was able to meet her idol thanks to the Children’s Wish Foundation of Canada.

“I found out that by the end of June that (my family and I) were going to fly down to Anaheim, California, to meet (Gomez) in July and they were also generous enough to throw in a three-day pass to Disneyland,” said Powell.

For the teen, meeting Gomez was a milestone and life-changing event, especially after overcoming so many health challenges. Powell said that the moment had a lasting impact on her and her family.

“(Gomez) has helped inspire me,” said Powell. “Even for my family too…it’s not always easy for the parents watching their child go through something and not being able to help. So, seeing me in that moment and seeing me so happy…made a wish come true.”

The work of the Children’s Wish Foundation has granted over 25,000 wishes for kids and teens with life-threatening illnesses across Canada over the past 30 years. According to a new study, those making those wishes come true have a positive and life-long impact on children and their families.

The 2017 Children’s Wish Study, reveals that the wishes help “aid the overall healing process, provide a distraction that helps cope with the emotional and physical stress of treatment, improve family cohesion, and inspire wish children in long-lasting ways.”

The study is based on a survey sent out between June and July 2016. It was completed by 52 parents of children who had their wish come true by the Children’s Wish Foundation.

According to the survey results, 94% of parents rated their child’s happiness level as very high after the wish had been completed.

Wishes also have a positive influence on the healing process. Ninety-three percent of parents surveyed said that the wish experience was an essential part of their child’s healing or treatment. All of the parents said that the wish provided positive changes to the family that are long lasting.

March is #WishMonth, and all month long the Children’s Wish Foundation will be holding celebrations across Canada. To kick off the events, all major landmarks across the country, including Science World (BC), the CN Tower (Ontario), Calgary Tower (Alberta), and Montreal City Hall (Quebec), will light up blue.

In 2016, nearly 1200 wishes were granted, making it the largest wish year in the foundation’s 32-year history. You can help make heartfelt wishes come true by donating today.

For kids like Melissa, the Wish Foundation has helped change her life for the better. “It was a once in a lifetime opportunity,” she said. “It honestly (meant) everything to me.”