Charles Demers is kind of a huge downer. Whether you know his work on the standup circuit or from more recent forays through collaborations like An East Van Panto or Leftovers, Demers has always been a bit of a pessimist, or, in his words, more like a “catastrophist”. And he’d be the first person to tell you that. His newest book, The Horrors, is hardly a deviation from the local comedian’s trademark black humour, and drops in local bookstores later this week.

From rising temperatures to global conflicts to simply growing up: the world is a scary place. Turning such despair on its head, celebrated comedian and author Charles Demers invites us to laugh at our troubles while cataloguing his own personal hangups from the slightly awkward to the downright terrible. The Horrors hijacks the children’s book tradition to present 26 alphabetical essays on Awful Things, with accompanying illustrations.

Vancity Buzz sat down to talk to Charles Demers about The Horrors.

The book is Demers’ attempt at combining both sides of his psyche – the pessimist and the comedian – into a series of essays dealing with weighty subjects. Chapter topics range from standard comedian fare “A for Adolescence”, “F for Fat”, “J for Junk Food”, to more revealing and still-taboo topics: “D for Depression” and “M for Motherlessness”. It’s no surprise that Demers feels closest to this last one, how the most trying part of the process was finding a way to speak honestly about losing his mother as a child. “Can humour be used to deal with some of the things we’re most afraid of in life? I wanted to know that I could do it without being evasive, but still have it be funny. I think I landed fairly close to what I wanted to do with [M for Motherless].” 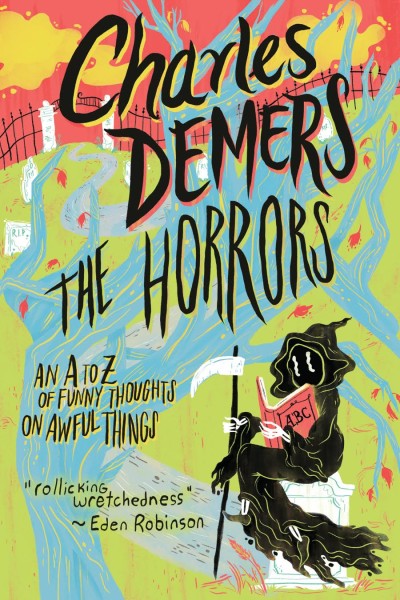 In recent years, putting himself out there was not a conscious shift for Demers. “You get to a place where you can express yourself authentically, having figured out the form. I have a compulsive, confessional nature. When I was a kid, my dad has these stories of me coming home and saying things like ‘I swore today at school.’”

And Demers later added, slightly sarcastically but mostly in earnest: “I have no capability for assessing my own moral character or successes. I feel like I’ll just put it out there and let the world tell me what to think of myself.”

We weren’t buying Demers’ modest evasion, so we asked this self-proclaimed pessimist if he was happy with his achievements so far. “I feel like there’s no way of answering that without sounding horrible. Intellectually, I know that I have a pretty good life. It’s a very difficult thing for me, constitutionally, to be happy. I’m just not a very happy person in my DNA. I have flashes of transcendent joy and satisfaction, when I’m spending time with my daughter and my wife, or when I’m working with friends on an artistic project. My default is not to be a particularly content or satisfied person.”

With that kind of soul-barring truthfulness in an interview, we expect much of the same out of The Horrors. Demers, however, has a different expectation entirely: “When you do standup, you know immediately what people think of the work, because they’re right there in the room. With a book, it’s so delayed, so you’re waiting to hear how people respond.”

Charles Demers is an author, stand-up comedian, and a faculty member of the Creative Writing Program at the University of British Columbia. Demers and his comedian friends are hosting a Book Launch & Comedy Night for The Horrors at The Fox Cabaret on October 1. Tickets are free, but require advance RSVP.