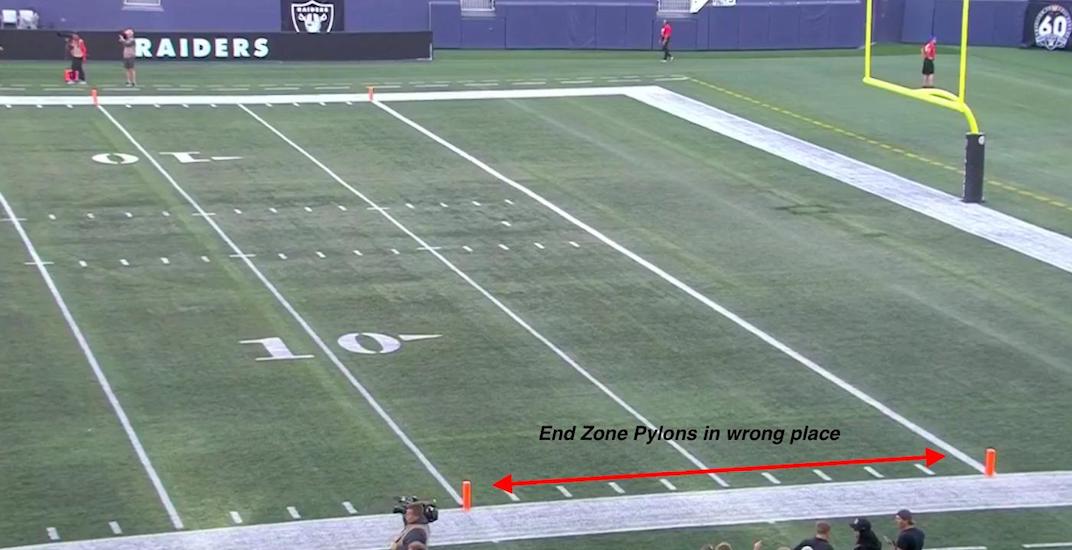 The NFL’s debut in Winnipeg didn’t exactly go according to plan.

And I’m not referring to how organizers had serious trouble selling tickets or how a player showed up wearing a “Winnipeg, Alberta” t-shirt.

The Oakland Raiders played the Green Bay Packers in a preseason game in front of an announced crowd of 21,992 in the Manitoba capital on Thursday. The Raiders won what was a reasonably entertaining game, erasing a 21-10 halftime lead by the Packers — kicking the winning field goal with eight seconds left in the fourth quarter.

The part that didn’t go according to plan concerned the field dimensions, which were changed in a last-minute decision because of a hole in each end zone.

IG Field, home of the Winnipeg Blue Bombers, is typically set up for a 110-yard CFL field, with 20-yard end zones and goal posts sitting on the goal line. The field was reconfigured for the NFL game: 100 yards in length, with goalposts set up at the back of each 10-yard end zone.

Just one problem. They failed to adequately patch up the hole where the CFL goal post is typically attached.

My man @TheMozKnowz squatting next to the notorious patch and giving the people the TV visuals they need pic.twitter.com/PBzrRo6uhJ

NFL, #Packers and game officials check out the “hole” in the end zone before #Raiders game. pic.twitter.com/N8JBhBAYx2

Concerned over player safety, officials ruled that the game would be played on an 80-yard field, with no kickoffs, and the end zones moved to between the 0- and 10-yard lines.

Here’s where the pylons are placed to mark the end zone in Winnipeg pic.twitter.com/A0IYwfvMkT

To make matters worse for fans that paid the extraordinary prices to see the preseason game, the Packers responded by sitting nearly all their starters (33 players) for the game — including the star quarterback Aaron Rodgers.

Raiders head coach Jon Gruden disagreed with the decision to shorten the field.

“We thank the people of Winnipeg, we had a great experience. The field, I don’t know what that was all about. We thought the field was perfectly fine,” Gruden told reporters in his post-game media conference.

“I’m not going to make a big deal about the field. We liked the field. We thought the field was perfectly ready to roll. You’ll have to ask Green Bay about that.”