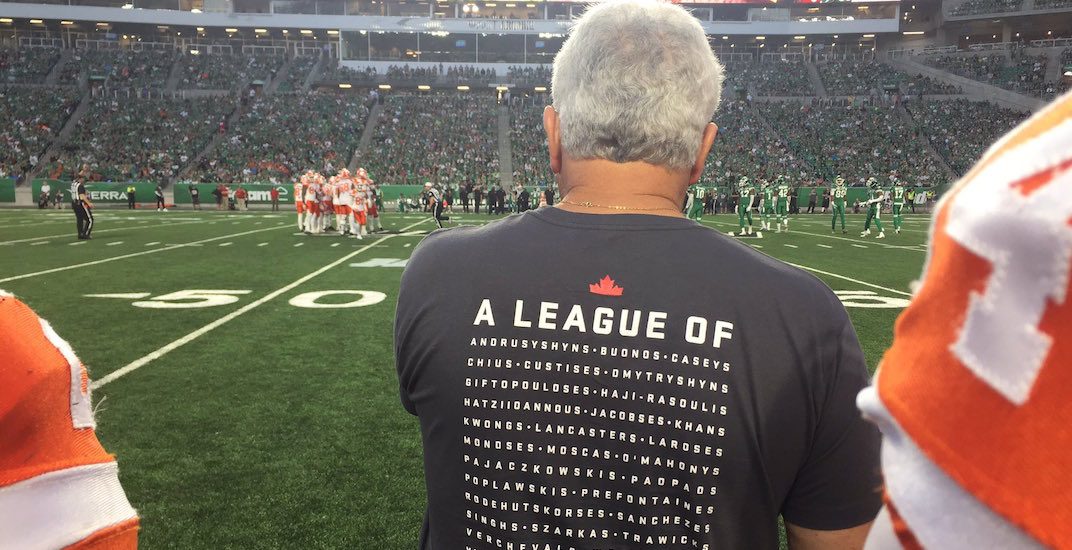 The CFL has moved up its ‘Diversity is Strength’ campaign due to the violence that took place in Charlottesville, Virginia on Saturday.

Players and coaches from both the BC Lions and Saskatchewan Roughriders took to the field on Sunday wearing grey t-shirts, which read ‘Diversity is Strength’ on the front, and had the names of important players of different cultures and races on the back.

Diversity is Strength: Always and everywhere.

Paulo Senra, Director of Communications with the CFL, told Daily Hive in an email that the shirts were originally meant to be rolled out later in the year as part of the Canada 150 celebrations.

Great call by Wally Buono and everyone else in the @CFL wearing these shirts tonight. #DiversityIsStrength pic.twitter.com/mJuDTUxnJe

“As part of Canada’s 150th birthday, we wanted to highlight the important values of our country and the parallels with our league,” he said. “‘Diversity is Strength’ was ultimately chosen because of how well it encapsulated the progressive history of the CFL and its players.”

Today we celebrate those that have made us strong.

Senra said that the decision was made unveil the shirts this weekend in the aftermath of the situation in Charlottesville.

“The idea to release the t-shirts on Sunday in Saskatchewan was a direct response to those events, and yet another way for the CFL to show that while we are not perfect, we are adamantly against hate and bigotry and stand for diversity and inclusion.”

With protesters taking to the streets, riot police in full uniform, and a tragic death via car attack that has has a man charged with second degree murder, it’s no wonder that the CFL decided that now would be an ideal time to send a message of unity.

This campaign couldn’t have come at a better time. Just another reason to love the CFL. I’m going to need on of these shirts asap pic.twitter.com/FZaiVGnvLt

The limited amount of shirts are set to go on sale Tuesday in the CFL store due to “overwhelming support” for the message they convey.