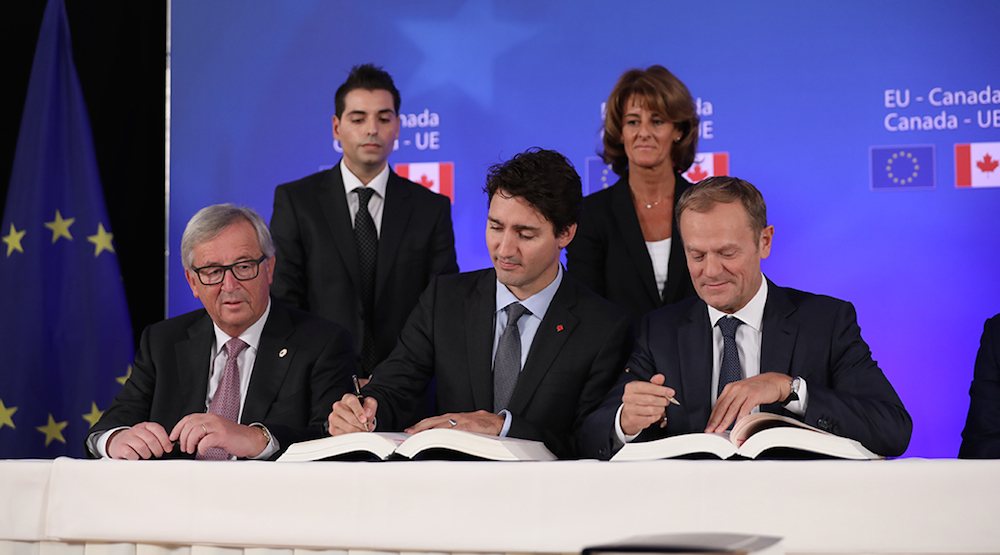 One of the most significant Canadian trade deals since the North American Free Trade Agreement is moving a step forward after nearly a decade of challenging negotiations.

The Comprehensive Economic and Trade Agreement (CETA) between Canada and the 28 member states of the European Union (EU) was formally signed today by Prime Minister Justin Trudeau and the presidents of the European Council and European Commission, Donald Tusk and Jean-Claude Juncker, in a summit at Brussels.

“The signing of CETA is a historic occasion,” said Trudeau in a statement. “This modern and progressive agreement will reinforce the strong links between Canada and the EU, and create vast new opportunities for Canadians and Europeans alike—opening new markets for our exporters, offering more choices and better prices to consumers, and forging stronger ties between our economies.”

However, over the past few weeks, the deal was nearly canned after Wallonia, a small region in Belgium with a French-speaking population of 3.5 million people, rejected CETA prompting the Canadian delegation to walk out of discussions.

The deal required the unanimous approval of all EU member states, but Belgium at the time was not able to provide its blessing because of the regional government’s initial disapproval.

In 2013, Canada exported $49.2 billion in goods and services to the EU whereas Canada’s imports from the EU reached $62.5 billion. FDI from Europe was pegged at $191.4 billion during the same year, and Canadian FDI in the EU was $187.2 billion.

It is anticipated that CETA will increase Canada-EU trade by 20% and boost Canada’s income by $12 billion annually by providing both markets with broad access to each other’s goods and services. It will abolish most tariffs, provide Europeans with access to bid on Canadian government procurement projects, and liberalize trade in services.

“British Columbia has worked closely with the federal government to ensure BC’s interests were reflected in the agreement,” said Teresa Wat, Minister of International Trade and Minister Responsible for Asia Pacific Strategy and Multiculturalism, in a statement. “We’re confident that, once fully ratified, CETA will benefit all Canadians by providing preferential access to the world’s largest integrated economy.”

Following the United Kingdom’s June decision to proceed with Brexit over the summer, there were some concerns over the future of CETA and how the trade deal would work without Britain as a EU member. Approximately half of the FDI that currently goes from Canada to Europe every year goes through London.