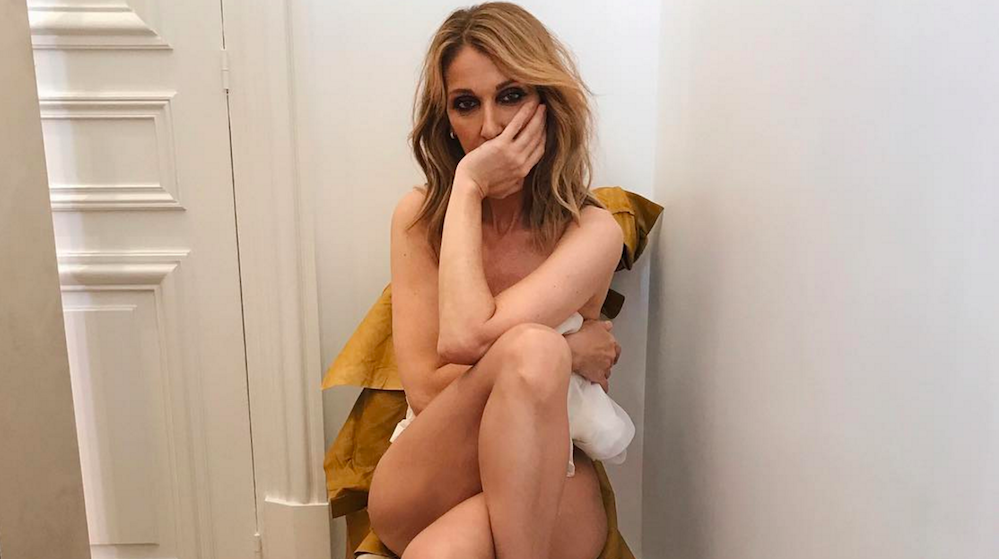 Vogue Magazine recently posted a photo to its Instagram account of a nude Celine Dion taking a short rest between costume changes.

The 49-year-old Canadian singer performs a show tonight at the AccorHotels Arena in Paris, the first of four shows taking place at the arena this week.

The Instagram post’s caption went into detail on the clothing that the Canadian singer usually wears during her performances.

“For the past five years she has worn haute couture near exclusively for her own performances (in Las Vegas and on her current “mini-tour” of Europe),” the caption reads.

“She performs a minimum two hours a night, five or six nights a week, dancing and curtseying and generally gesticulating sans abandon, in handmade, hand-beaded delicacies designed solely to walk a catwalk or a carpet (and often with handlers).”

“Says Celine, ‘We have to make haute couture industrial.’ And, more enigmatically: ‘The clothes follow me; I do not follow the clothes.’ Which is to say: the haute couture, with all its fragility and handcraft, has to perform professionally for Ms. Dion.”

No wonder she seized the opportunity to take this well earned, outfit-free moment of rest.

Vogue Magazine has posted other, more attired photos of a photoshoot in Paris of Dion, with captions explaining the singer’s opinions on fashion, jewelry, and the paparazzi.

“They see me; I don’t see them,” is Celine Dion’s line on the great blob of paparazzi and fans that follows her everywhere. She gives them any picture they ask for, plus a great many more. Consider an appointment with at the house of Schiaparelli, where she poses for the creative director Bertrand Guyon on a window sill overlooking the Place Vendome. She wears a tiny whimsical dress of Swarovski chainmail re-embroidered with yet more crystals and high sparkly Victorian boots–a little Twiggy, a little Tina Turner. Says her dancer Pepe Munoz: “That’s a rockstar!” Says Libby Hahn, who handles public relations for the house: “I am fairly certain she was a rockstar before she put on the dress.” Says Celine’s own longtime photographer Denise Truscello (a Canadian cinephile with her own rockstar style), thinking of the long lenses poised on the place below: “Is the dress pulled down in the back?” Says Celine Dion: “They might see my butt, but I don’t think they mind.” #CelineTakesCouture Photographed by @denisetruscello

Celine Dion is frustrated by fashion’s current revolving door policy, the relentless firings and hirings at the top (amen to that!). She is concerned that “the dream” of elegance is disappearing, for as much fun as she had in her beloved Vetements Titanic sweatshirt (and we have Law Roach for that brilliant post-ironic gesture!), she believe in the magic of hats, gloves and total looks, of a world in which Lisa Fonssagrives could step from the pages of Vogue and through the doors of today’s Ritz. Mostly she laments the red carpet hordes with the incessant questions about whose clothes and jewels one is wearing. “Mine” is her answer. Fashion is public for Celine; jewelry is personal. Sometimes, when she is at home in Las Vegas and missing her partner Rene, she slips on a caftan and all her jewels, and quietly retreats to her bath, sans children, sans fans, sans circus. #CelineTakesCouture Photo by @sophfei.