The annual off-shore fireworks display is back with another three night schedule.The Celebration of Light Vancouver 2014 is once again brought to you by title sponsor Honda and local event organizers brand.Live.

Bleacher seats, food, music and other performances and activities will also be back to add to the city’s largest and most anticipated summer festival.

There will be a food truck festival each fireworks night at the Sunset Beach parking lot and Concord’s Seawall Challenge benefiting after-school programs for school children will be making a return after 2013’s successful inaugural event.

The West End Business Improvement Association will host a series of roaming performances along Davie and Denman Streets and the Sheepdogs will headline this year’s SHOREFEST.

“We are very happy to see the growth of programming this year,” said the Hon. John D. Reynolds, Chairman of the Vancouver Fireworks Festival Society. “Now, there’s even more to bring friends and families together during the summer. The Honda Celebration of Light will truly be when Vancouver Shines bright.”

An excess of 300,000 spectators are expected at English Beach each night during the event’s 24th year. Festival goers can download the Honda Celebration of Light mobile app to see artist schedules for SHOREFEST, search through an interactive site map, and vote for their favourite pyrotechnic team. 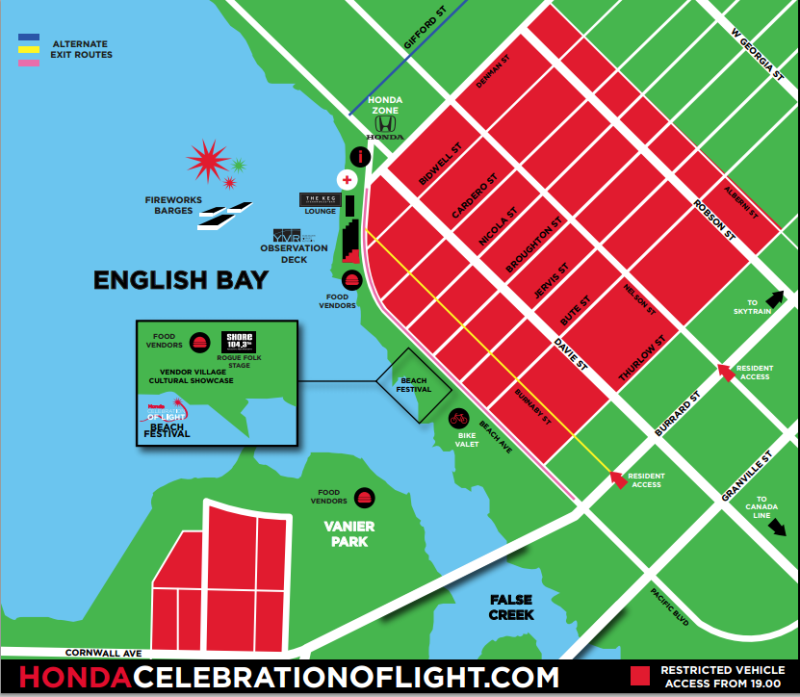 TransLink is gearing up to ensure safe and convenient access to the fireworks at English Bay with additional bus and train service on July 26, July 30 and August 2.

*To avoid lineups at Ticket Vending Machines after the events, SkyTrain customers can pre-purchase return tickets at King George, Scott Road, Granville, Burrard, Bridgeport, Yaletown–Roundhouse and Vancouver City Centre stations. These fareboxes only accept exact cash and tickets are valid until the close of service.

Before, during and after the events, transit stations will remain open, but some will have modified access to ensure customer comfort and safety.