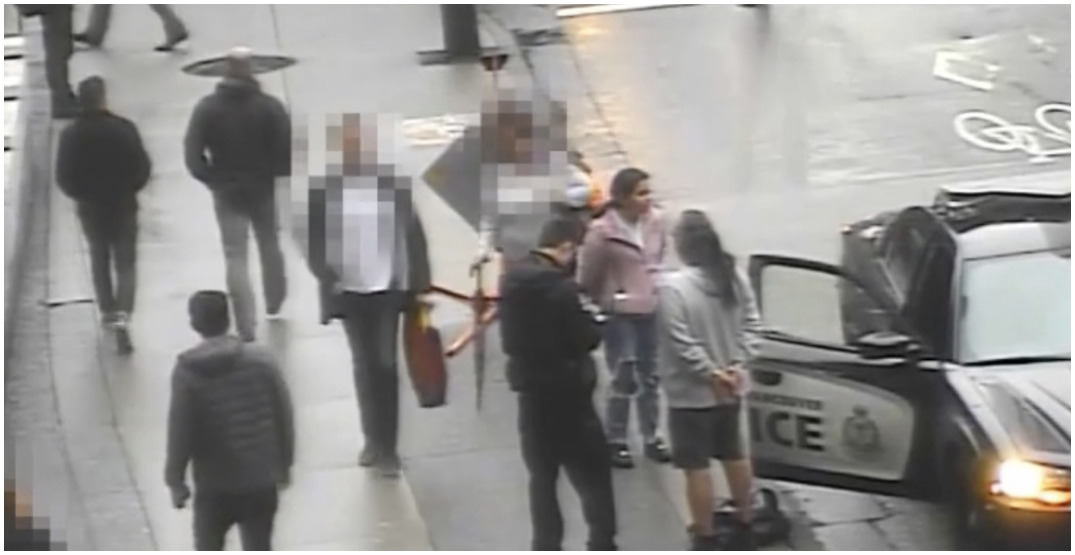 First Nations leaders in BC came together via Zoom to release unseen CCTV footage of the arrest of an Indigenous man and his granddaughter at a Bank of Montreal in Vancouver in December of 2019.

Grand Chief Stewart Phillip, along with provincial childcare advocate Mary Ellen Turpel-Lafond, who is also the director of the Indian Residential School History and Dialogue Centre, repeated calls for action from the VPD and Vancouver Mayor Kennedy Stewart.

Heiltsuk Nation member Maxwell Johnson and his 12-year-old granddaughter were at the downtown bank branch trying to open a bank account when they were wrongfully detained.

Bank staff suspected the pair of fraud and called the police.

“Maxwell is standing up to defend his rights,” said Turpel-Lafond. “People are handcuffed, and humiliated, and their rights are not respected.”

Turpel-Lafond will now be intervening in the BC Human Rights case against the VPD.

In the CCTV footage, you see Maxwell Johnson and his 12-year old granddaughter both standing on the sidewalk in handcuffs as pedestrians walk by.

After gathering more information, officers determined no fraud had occurred and released the pair, Vancouver Police Department Sgt. Aaron Roed told Daily Hive at the time. BMO has apologized about what happened.

The Union of BC Indian Chiefs also released the VPD statement of defence in which the department claims this was not about race: “The Officers did not respond differently to the Complainants on the basis of their ancestry, race, colour, age, or family status. The Respondent submits that the Officers’ conduct with respect to the Complainants on December 20, 2019 was appropriate and measured in the circumstances and not discriminatory.”

Turpel-Lafond went on to say, “There’s a phenomenal amount of support within the First Nations community. It’s important that British Columbians see the campaign, and speak up and support the campaign. It’s not something that should be on the shoulders of First Nations people alone.”

“I call on the mayor to do more than pay lip service as chair of the police board,” said Grand Chief Phillip, visibly frustrated.

Mayor Kennedy Stewart is expected to hold a press conference later in the day.

Daily Hive has reached out to the VPD for a response.