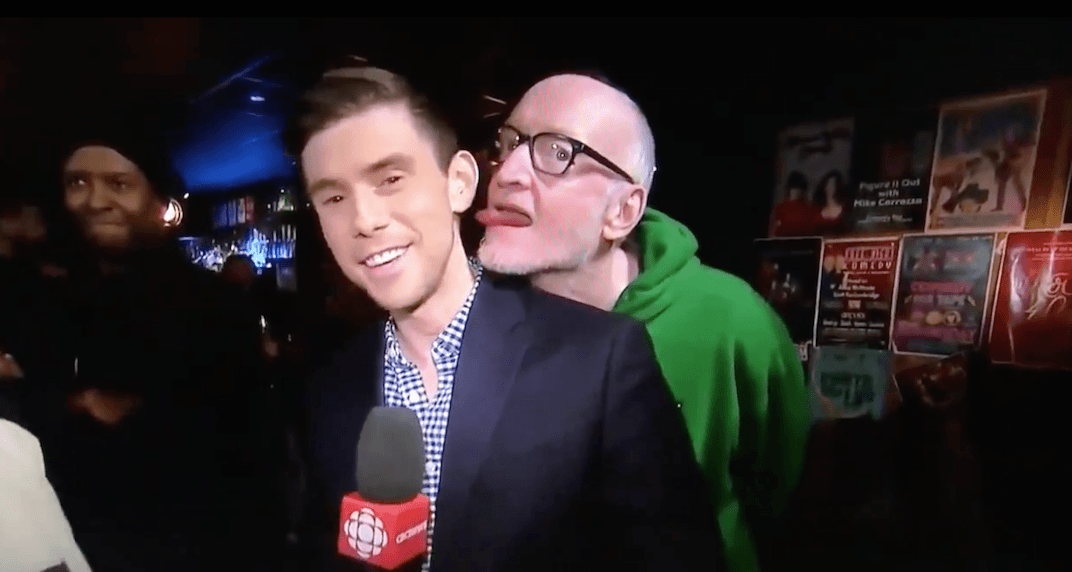 A CBC reporter in Toronto has filed a police report after being harassed on air during a live segment earlier this week.

CBC reporter Chris Glover was doing a live hit during a segment at a Toronto comedy bar while an older man makes some very inappropriate gestures behind him, and eventually, to him.

Video from the live broadcast shows the man making kissing gestures and trying to lick Glover’s face standing behind him.

This is so disturbing and I get more uncomfortable every time I watch this creepy guy assault @chrisgloverCBC on live television. Why do people think it’s OK to #harass & #assault reporters while they do their job?! It’s gotta stop! @chrisgloverCBC @CBCToronto #Toronto #reporter pic.twitter.com/rSeTStQI5L

According to CBC, the man has been identified as actor and comedian Boyd Banks, who has appeared on CBC’s Little Mosque on the Prairie and the film Dawn of the Dead.

The Canadian Association of Stand-up Comics (CASC) was hosting the event where the incident took place and has issued an official apology to Glover.

“We think his behaviour was despicable, and we offer our sincerest apologies to Chris Glover, the reporter, that this happened at our event.”

“As CASC grows, we will make changes and invest in precautions to protect the wellbeing of all Members, media, and other attendees at our events.”

The organization notes that Banks is not a member of the CASC.

In an interview with CBC, Banks said he was an “idiot” and wanted to apologize to “the stand-up community in Canada and of course the reporter who was doing his job.”