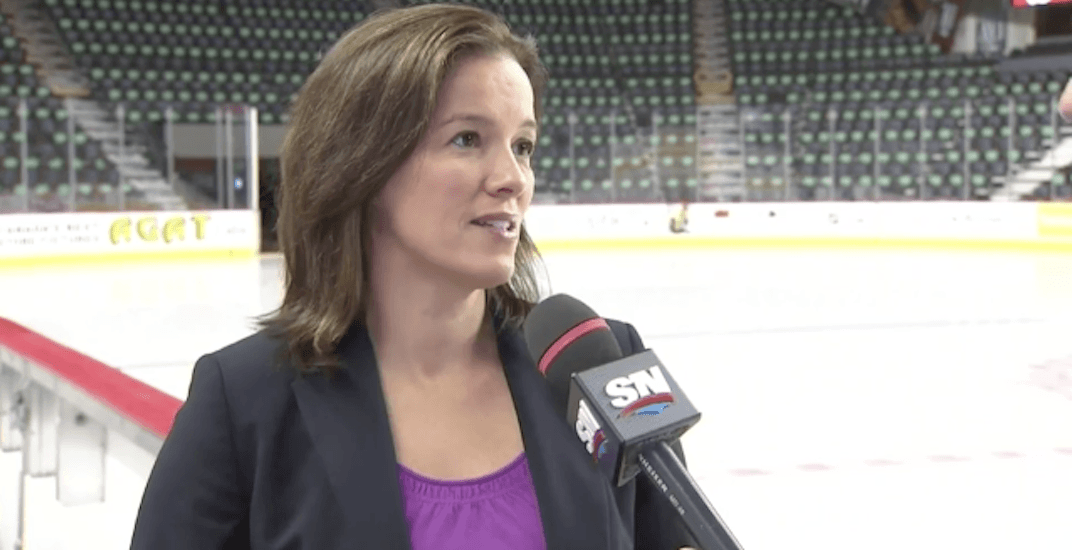 Cassie Campbell should be allowed to call whatever game her bosses want her to call.

Seems obvious, but an ill-advised tweet by Ken Campbell (no relation) on the weekend had people talking.

After hearing the former women’s national team captain calling a game between the Calgary Flames and Edmonton Oilers on Hockey Night in Canada this weekend, here’s what the senior writer of The Hockey News tweeted:

“Cassie Campbell is a very good, well-informed and intelligent colour analyst. But it’s unacceptable that (Hockey Night in Canada) has her working Calgary Flames’ games. Her husband, Brad, is the Flames’ assistant GM.”

Ken Campbell has since deleted the tweet, but not before a barrage of angry tweets – he called it a “Twitter tsunami” – were headed his way.

It’s ironic that the writer was focused on the optics of the situation, because the optics of his critique – involving one of the few female broadcasters given the opportunity provide commentary in the broadcast booth – does not look good.

Some notable names in Canadian media let him know about it:

Just interesting that you would decide to point this out all of a sudden when it involves a woman.

You appear to be holding a female commentator to a different standard than her male counterparts, in the same situation. #doublestandard

I think Cassie does an excellent job in her role. I guess I shouldn’t comment on the Flames because I worked there & my Brother holds a prominent position there as well! pic.twitter.com/SV18RSjWSo

Ken Campbell has since apologized, but he’s still bothered by perceived conflicts of interest:

After I ignited a Twitter firestorm with my comments about @CassieCampbell and @hockeynight, here are some sober second thoughts. I appreciate everyone who kept me accountable: pic.twitter.com/FIk025wz6O

Getting beyond whether or not what Ken Campbell said was sexist, his argument about optics is silly even if you remove gender from the issue.

Would Cassie Campbell carry a bias into the broadcast booth given that her husband, Brad Pascall, has a high-ranking position with the Flames? Of course she would.

Would that affect her commentary? Doubtful.

Is it any worse of a bias than a former player calling a game that includes his former team or teammates on the ice? I don’t think so.

How about Ray Ferraro or Louie DeBrusk, who have called games involving their sons? If you know anything about hockey dads, not a chance.

The play-by-play booth is hardly a sacred place.

Have a listen to nearly every broadcast team on regional telecasts and it’s obvious which team they’re cheering for. Some are worse than others.

Or maybe some just hide it better than others.

National broadcasts, like the one Cassie Campbell was on, are usually less biased in tone but often involve many of the same people that cover the regional games. John Shorthouse (Canucks regional play-by-play) and Rick Ball (Flames) call games nationally from time to time.

Congrats to @HC_Women alum, and an incredible ambassador of women's hockey, @CassieCampbell on the Order of Canada. pic.twitter.com/dprdM9HbPl

Cassie Campbell is a former player of course, but she has remarkably few ties to any of the players on the ice given that she played women’s hockey. The two-time Olympic gold medallist transitioned well into broadcasting after her playing career is over, and has a great reputation.

She has the respect of hockey fans.

Hockey Night in Canada could have moved Campbell to cover a different game, but that would have been an unusual and unnecessary solution.

If Cassie Campbell was refereeing the game or had an impact on its outcome, you could understand the conflict of interest outcry. Same thing if this was concerning a serious subject, like a court trial.

But for a silly hockey game? Give me a break.

Maybe just chill, and let the Canadian Olympic hero and recipient of the Order of Canada call the damn game.