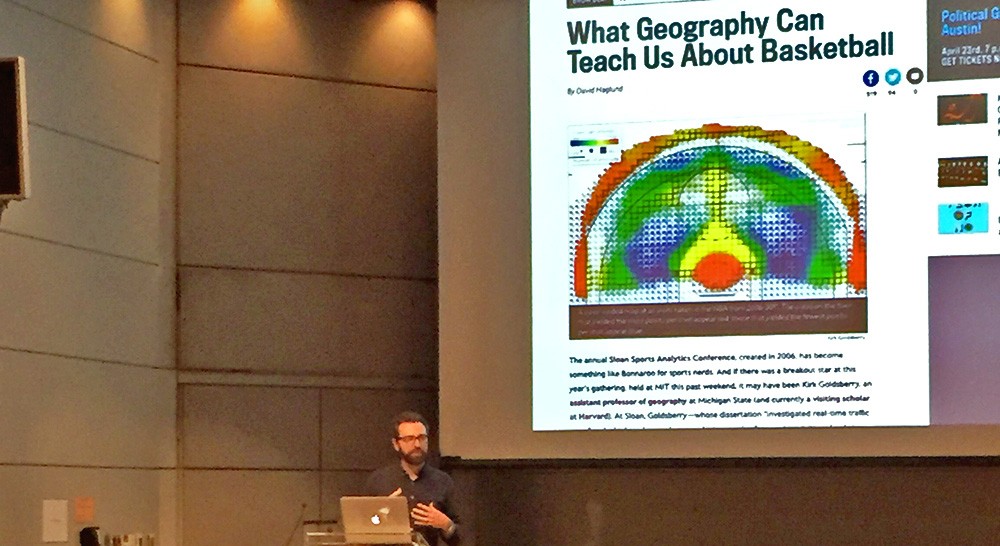 Just one year ago, Charles Barkley said the following about analytics and Houston Rockets’ GM Daryl Morey: “I’m not worried about Daryl Morey. He’s one of those idiots who believes in analytics … First of all, I’ve always believed analytics is crap…”

While Barkley’s take on analytics – that they are some God-like entity nut jobs submit to – sounds foolish to many, Kirk Goldsberry, who works with the San Antonio Spurs, thinks Barkley and others who think analytics are “crap” simply misunderstand them.

Goldsberry has been working with the Spurs’ analytics team for the past year, and he was the keynote speaker at the inaugural Cascadia Symposium on Statistics in Sports (CASSIS) hosted by SFU in downtown Vancouver this past Saturday.

He used Barkley’s quote to explain that the popular sportscaster probably had a conversation or a bad explanation at some point that turned him off analytics.

Goldsberry told the story of how his life changed completely – he was a geography professor at Harvard University – when he published the study “CourtVision: New Visual and Spatial Analytics for the NBA”. Soon after, he was being called “one of the stars” at the Sloan Sports Analytics Conference after he presented visual illustrations showing the NBA’s best shooters from different areas.

Goldsberry went on to write about basketball for ESPN sports website Grantland for two years before eventually being hired by the Spurs.

Former Harvard professor Luke Bornn, who has studied basketball with Goldsberry, now works at SFU. He and Tim Swartz spearheaded CASSIS. He explains that CASSIS has been modelled after the New England Symposium on Statistics in Sports (NESSiS), which takes place at Harvard University bi-annually.

“We know sports analytics is growing and we want to have a west coast option,” Swartz told Daily Hive.

The plan is for the Cascadia Symposium to take place on the New England Symposium’s off years.

If you’re wondering how CASSIS compares to the more famous Sloan Sports Analytics Conference, Bornn explains that Sloan focuses more on the media and fan engagement.

“NESSiS is this more technical, more rigorous sports analytics conference. That’s essentially the idea to model (CASSIS) after,” he says.

Aiming the conference at the west coast, not just Vancouver, Swartz and Bornn appear to have hit their mark. Representatives from the Vancouver Canucks and Whitecaps, the Seattle Seahawks and Sounders, and the English Premier League all attended.

“The idea is to bring people from multiple sports to get them talking about sports analytics,” said Bornn.

Both Swartz and Bornn work in SFU’s Department of Statistics and Actuarial Science and they have formed a sports analytics group including professors from the communications, computer science, business, and biomedical physiology and kinesiology departments.

This past summer, Swartz taught a course called Statistics in Sport.

Comparing different sports, Swartz explains that analytics are expensive, so they’re only possible in sports where there is money. Having said that, hockey is not quite at the level of other sports such as baseball and basketball.

In 2013, then-former-Leafs GM Brian Burke was famously quoted at the Sloan Sports Conference saying, “Numbers are overrated a lot of the time … It’s an eyeball business … You’ve still got to watch guys … No one’s ever won a title with Moneyball.” (from the Star)

In MLB and the NBA, every team now has its own group of statisticians, while in the NHL, certain teams such as the Maple Leafs, Panthers and Coyotes are all-in, while others are still warming to the idea.

“Hockey is coming on board,” Swartz says. “What’s happening is they have cameras now, like they do in basketball, and as soon as that data becomes available, I think hockey will take off.”