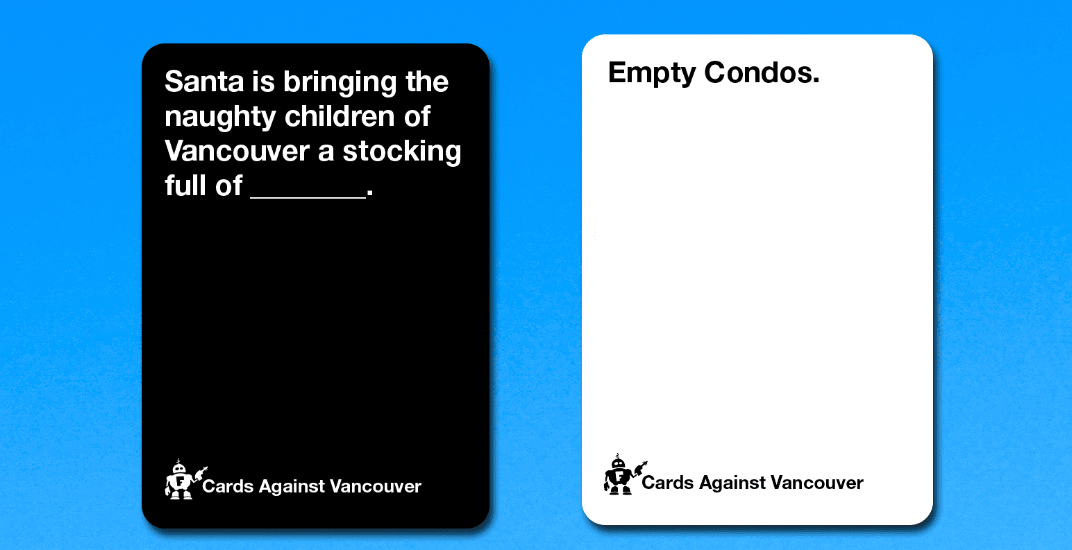 Just in time for those Christmas holiday games nights, a new, locally created party game in the form of Cards Against Vancouver has just been launched.

Created by The Fictionals Comedy Co., the game features over 125 cards celebrating and skewering life in Vancouver, including shout-outs to the Gastown Steam Clock, Ryan Reynolds and of course, bike lanes.

According to Daniel Chai, co-founder of The Fictionals, the new game was inspired by the fans of their hit show, Improv Against Humanity.

“We’ve been performing Improv Against Humanity since 2012, and at each show, we had audience members come up to us with their own interesting card ideas,” said Chai. “Many of them were about life here in Vancouver, like riding the 99 B-Line or swimming at Wreck Beach. So we decided to put together the best ideas into a tribute deck.”

Cards Against Vancouver is free to download and also works as an unofficial expansion pack to the hit game Cards Against Humanity.

Interested players are also encouraged to join The Fictionals at The Rio Theatre on Wednesday, December 20 at 8 pm for the official launch during Improv Against Humanity.