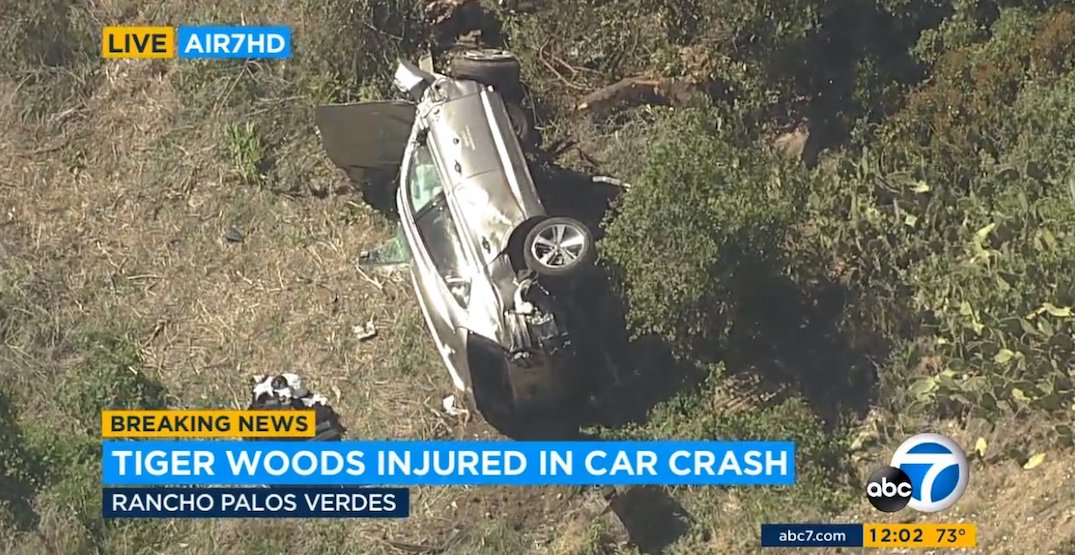 Tiger Woods is in hospital and his vehicle is a mangled wreck, after the 45-year-old golf legend was involved in a serious collision this morning.

Woods was hospitalized with “multiple leg injuries” that required surgery, according to his agent, Mark Steinberg. The injuries are not considered life-threatening, according to a report from ESPN’s Michael Eaves.

Injuries are not considered life-threatening. Currently undergoing surgery on leg injuries. Local police source said the initial report from the scene of the accident indicated the possibility of multiple leg fractures. #TigerWoods #golf

The LA Times says law enforcement sources told them that Woods was “traveling at a high rate of speed” and lost control of his SUV, which crossed the divider and rolled multiple times before coming to stop. Woods needed the jaws of life to be removed from the vehicle, according to the LA County Sheriff’s Department.

Nearby television news helicopters have provided the first images of the vehicle, which helps to visualize just how serious the accident was.

Tiger Woods was taken to the hospital Tuesday after he was involved in a single-vehicle rollover crash.

Woods, 45, was extricated from the wreck with the "jaws of life" by first responders. pic.twitter.com/OGbG56w847

Tiger Woods’ vehicle after the crash this morning that now has him in surgery for what his agent is calling “multiple leg injuries.” pic.twitter.com/VbI5qvyj8g