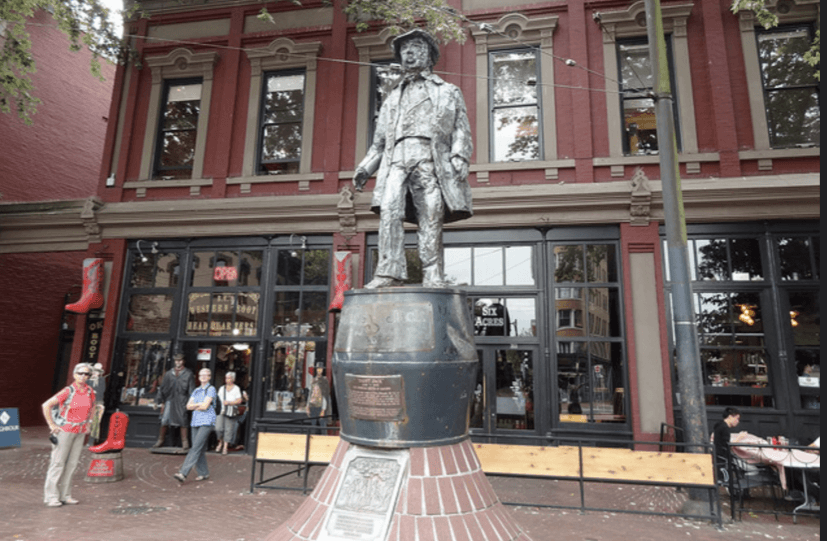 A small piece of Vancouver’s history can soon be yours.

On Saturday, September 3, the last remaining item belonging to the estate of Captain John Deighton (widely known as ‘Gassy Jack’)  will be up for auction.

The item is an estate settlement document confirming that Gassy Jack sold his hotel (at one point) to steamship captain John Irving in order to pay off his debts.

Brian Grant Duff, owner of All Nations Stamp and Coin, says the document is estimated to be worth at least $500.

“It’s not much to look at but it is an amazing artifact from Vancouver history,” Duff told Daily Hive. 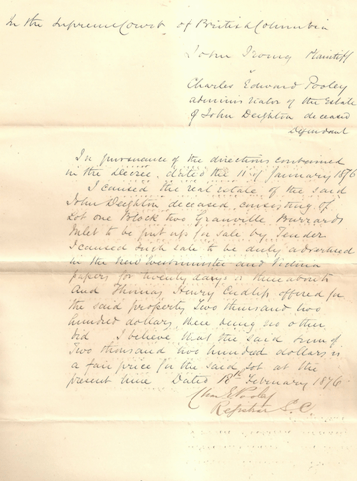 Image: All Nations Stamp and Coin

For those who aren’t familiar with Gassy Jack,  you have probably seen him in Gastown because his statue stands on the corner of Water and Carrall street.

And to really appreciate Gassy Jack’s legacy, you need to know a bit about him.

Originally from England, Gassy Jack traveled to America in the mid-1800s looking to strike rich in the Gold Rush.

Unfortunately, he didn’t find any gold and in 1858 he traveled to the Fraser River and became a steamboat captain.

Growing tired of the craft, Gassy Jack hung up his captain’s hat and tried his hand at bartending.

In 1862, he opened up a saloon in New Westminster. It was a popular spot but shut down after Gassy Jack temporarily put his American co-worker in charge, who depleted the pub’s liquor and financial supply while throwing a Fourth of July party.

Following that failed business venture, Gassy Jack jumped in a canoe with his family and a keg of whiskey and paddled to the south side of the Burrard Inlet where bought a maple tree grove.

He opened a new bar called the Globe Saloon, which became a popular spot for sailors and sawmill workers. The business dwindled and Gassy Jack moved locations again, this time buying a lot on the southwest corner of Carrall and Water street.

There, he built the Deighton House— a hotel with a bar and rooms for visitors to stay. Gassy Jack found great success with the Deighton House, as it was a hit with locals and visitors. His name grew in popularity, so much so that the area was named ‘Gastown’ in his honour.

Gassy Jack died in 1875 at age 44 and the Deighton House burned down almost a decade later. However, the legacy of Gassy Jack lives on beyond the streets of Gastown.

If you are interested placing a bid on the last item of Gassy Jack’s estate, the document will be up for auction on the All Nations Stamp and Coin website on Saturday, September 3 at 12 pm.