The annual Capitol Hill Block Party in Seattle, running from July 24 to 26, is one of those rare festivals that combines an intimate urban setting with a well curated roster of both local and international artists. Close enough to Vancouver that anyone can easily attend yet far enough to feel like you’re actually going on an adventure, this party is a consistent good time all around.

This week, Capital Hill Block Party released the full lineup for the 2015 festival as well as the availability of single day tickets and two-day passes.

Single day tickets will be on sale for $50 and two-day passes will be available for $90. Three-day passes are currently on sale for $125. CHBP is also continuing to offer VIP three-day passes for $250. The VIP packages include access to indoor and outdoor VIP lounges, limited edition festival apparel, complimentary food and drinks throughout the weekend and gifts from event sponsors. Purchase your ticket online now. 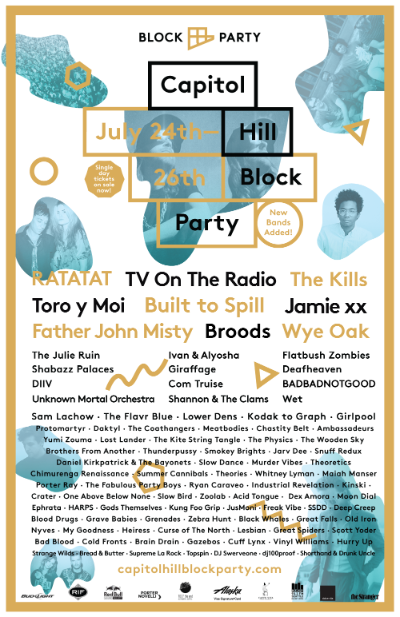 Named by USA Today’s “Pop Candy” as one of the “12 reasons to visit Seattle”, CHBP showcases all of the reasons Seattle stands out as a cultural hub. The annual summer festival features outstanding musical performances as well as some of the top resident art galleries, restaurants, clubs, and stores in Seattle’s Capitol Hill neighbourhood. CHBP showcases over 100 of the best Northwest and national bands and DJs on five stages over three days each summer.

Since it began in 1997, CHBP has built a strong reputation for bringing the best in regional and touring indie artists to the stage and has drawn 10,000 people a day for sold out shows year after year. Located in the heart of Capitol Hill, CHBP is all about independent music and culture, thought, and progressive politics. CHBP features excellent independent craft booths, food trucks and local non-profits, connects fans with local pro-music politicians and raises money for The Vera Project, KEXP and The Capitol Hill Chamber of Commerce, as well as the Capitol Hill neighbourhood and various other charities.