Hockey season is only a few short days away! The Young Stars tournament begins next week in Penticton, with the Canucks, Flames, Oilers and Jets sending their top prospects to compete in this eagerly anticipated round robin tournament.

The Canucks roster was released on Thursday and is loaded with high caliber players. A total of six first round picks will be representing the Canucks with Nicklas Jensen, Bo Horvat, Hunter Shinkaruk, Brendan Gaunce, Jared McCann and Jake Virtanen going to Penticton. Jake Virtanen will make the trip but he will not play as he is still recovering from shoulder surgery.

Here is the full roster (click on image for enlarged version): 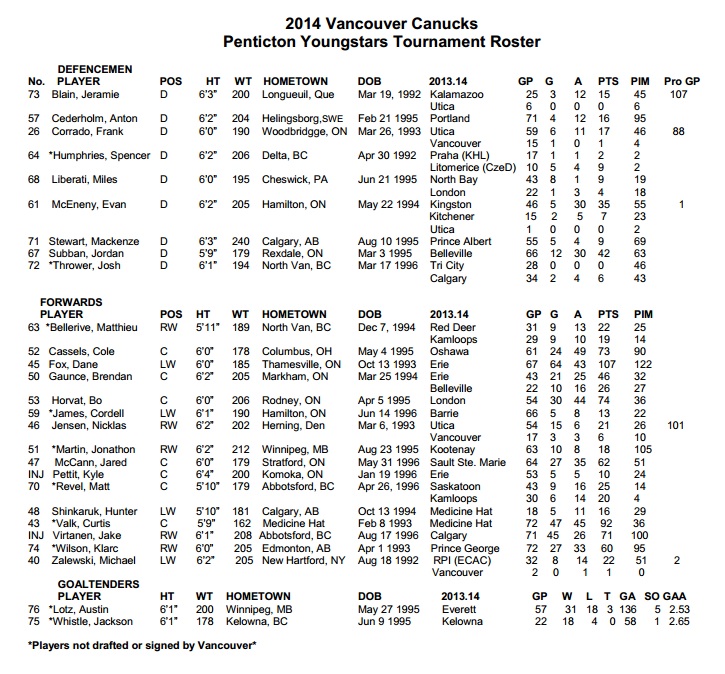 Two notable omissions from the Canucks are their 2014 2nd and 3rd round picks. Goaltender Thatcher Demko is already busy attending Boston College and defenceman Nikita Tryamkin has begun the season playing in the KHL.

As everyone in Vancouver gets excited to see our top prospects, the same can be said for Flames, Oilers and Jets fans. The three prairie teams have been terrible for a while now, so they have a lot of high first round picks to choose from.

Here is the Canucks’ schedule: 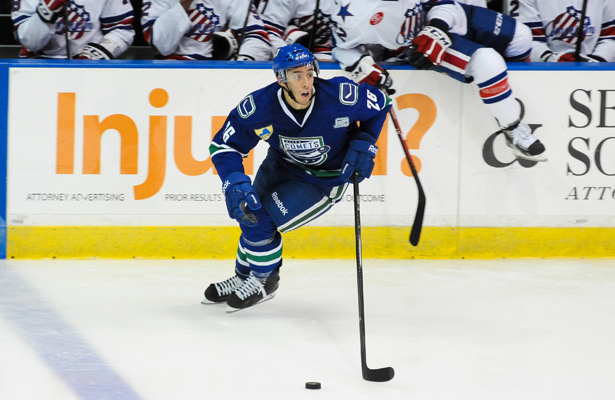 Corrado will be playing in his third Young Stars tournament, and should easily be one of the best players on the ice after completing his first full pro season last year which included suiting up for 15 games in the NHL with the Canucks. Corrado first appeared in the Young Stars tournament three years ago as an 18-year-old and really established himself as a top prospect in the organization. Since then Corrado has further grown as a player, and last year established himself as the number 1 defenceman in Utica. I expect him to dominate this entire tournament as he gets ready to try and land a full time roster spot with the Canucks in the fall. 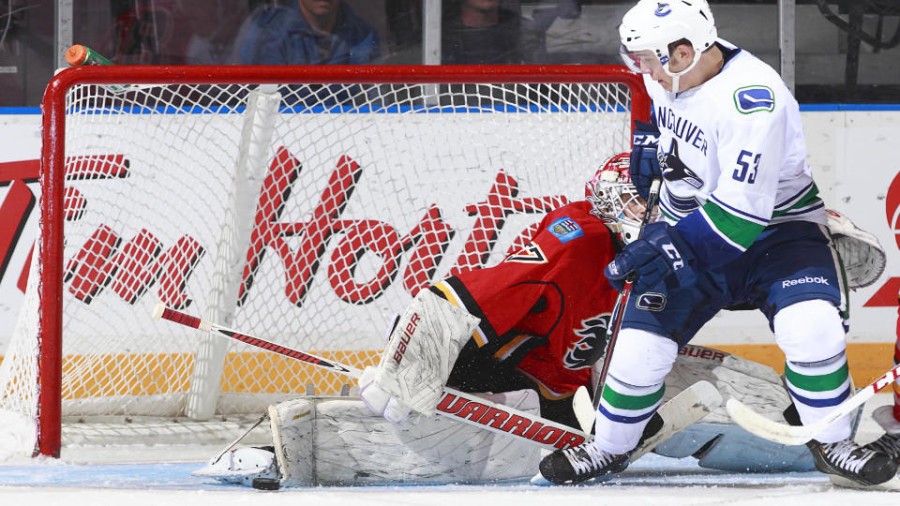 Another player that should excel in this tournament is Bo Horvat, as he tries to challenge for a roster spot this fall with the Canucks. Horvat has never been considered a flashy or electrifying player, which causes people to critique him, but he helps his team win with his great hockey IQ and ability to control the game. Horvat will need to show that he can be that dominant offensive centre against his peers. If he is able to do that, it should help his cause to get a long look at main training camp for a bottom 6 role with the Canucks.

Last year, Cole Cassels exceeded expectations and quickly shot up the Canucks prospect depth chart and I think that Jared McCann is the player who will do that this year. Although McCann is already highly regarded, due to being a first round pick in June, there is a lot of uncertainty about what McCann can do. Based on the game footage I have watched over the last couple of weeks (no summer off for us!), McCann has the skillset to become an all-around top 6 centre, while still being an agitating, abrasive and difficult to play against player that attracted the Canucks to draft him. I expect him to bring this skill-set to Penticton and hopefully give the Canucks Young Stars a good 1-2 punch up the middle with Bo Horvat.

This tournament is a highlight for any hockey fan as there are 2 games a day for 4 days in a great venue and city. If you can, I highly recommend that you make the trip up to Penticton for the weekend. Tickets are still available, and all the needed information can be found here.

I am lucky enough to be making the trip up to Penticton to take in the tournament for the first time. I will be doing post-game reports after each of the Canucks games, and also will be on Twitter (@ryanbiech) throughout the majority of the tournament giving my thoughts on the games, specific players and anything else that catches my attention. If you are there, send me a tweet, and come by and say hi!