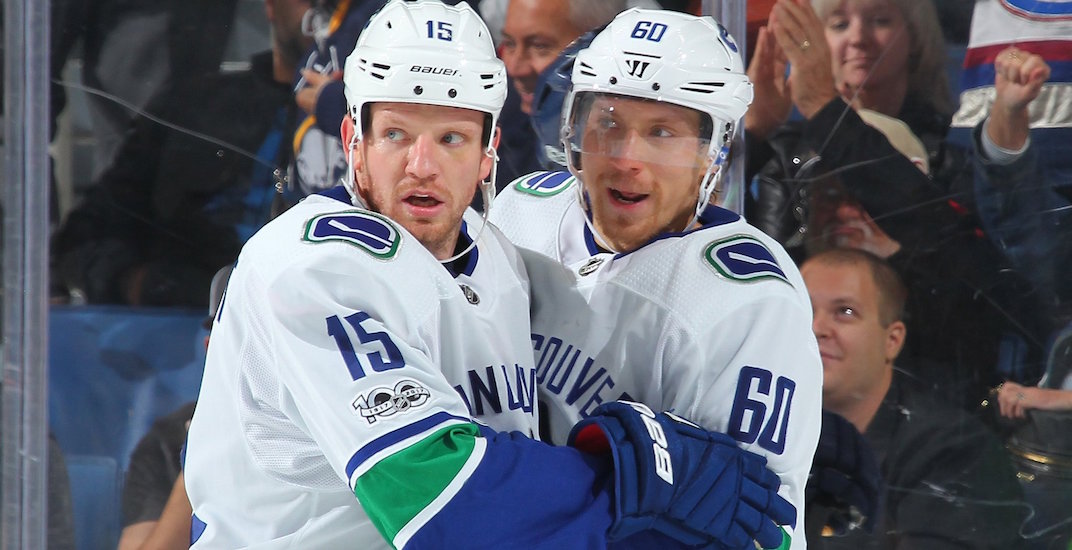 Not sure this’ll happen again – Vancouver was so far ahead, the third period was boring.

Let’s talk about how that happened.

First, Markstrom let in a bit of a softy at the end of the first.

He looked in the mirror during the intermission and blanked the opponents for the rest of the game, while his teammates responded with a great effort.

And no, this wasn’t a copied and pasted description of Friday’s game against Buffalo. I mean it could have been because it was pretty much the same story, but we work hard here at the Hive to bring you original SixPacks.

Though the final even-strength shot attempt count was 49-45 Canucks, with a second-period effort of 26-13 attempts, Vancouver earned and deserved the 4-1 win over Detroit.

And as Bailey would say, here’s what you need to know.

This is an official SixPack rule: if Jake scores, you lead with it.

Because of that, and probably because the Canucks were up 4-1 after the second, Virtanen got to play in the third as well.

Good question I guess, though I don’t know what’s the egg and what’s the chicken…

Virtanen’s played better with each game of the season, and because of that he’s been playing with the Sedins for two games now. And because they are looking dangerous and scored that 4-1 goal, Virtanen was given more ice time.

BTW, not only was Virtanen playing in the third, he even got to play on the power play, which, as some noted, was kind of a big deal.

Wait, was that…was that Virtanen on the power play? Are you…can you do that? Is that allowed? #Canucks

They nearly scored too.

Notice Hank looking to the sky after missing that glorious chance? Yeah, he’s still thinking about it.

It’s a fun story and a great bounce back from a serious injury, so let’s enjoy it.

This was Dorsett speaking about his neck surgery on Rogers Hometown Hockey on March 5, 2017:

“Basically my disc was bulging a little bit and I had some bone spurs in between the vertibrae. They went in and took the disc out and then took a piece of bone from my hip and put it in my neck so it’ll create a little fusion between my C5 and C6 vertibrae.”

Seven months later, he’s leading the Canucks in scoring with his five goals in the last five games. Here’s his goal against Detroit.

His five goals in the eight Canucks games puts him on a 51.25 goal pace.

No chance he does that.

Get it? If you don’t it’s because the joke’s too advanced for you.

If they could get a couple 2nd’s for Dorsett it would be heaven. Get rid of ridiculous contract and build for future.

Yeah, that’s not what I meant by enjoying this output from Dorsett, guys.

The Bear scored his first two goals of the season and somehow it only made number three in the SixPack. That’s what happens when Jake scores and Dors is on pace for 51.

Anyway, you could see the Boeser-Horvat-Baertschi line was ready for a big night early-on when they sprung Horvat for this early chance in the first.

Not long after, Baertschi scored his first of the season.

Great shot from Horvat, even better rebound and finish from Baertschi.

In the second, this one kind of fell into his lap after a good forecheck from Burmistrov.

Ex-Canucks AGM Laurence Gilman on TSN 1040 with Sekeres and Price on Wednesday:

“What I’ve noted in these couple of games (since Edler’s injury), is Michael Del Zotto’s ice time. (He’s) playing north of 25 minutes a game. My concern for a player like that is it will take its toll on his productivity before too long.”

Now, I’m not doing this to prove Gilman wrong, because, let’s be honest, he’ll probably be right if MDZ keeps playing this much.

Still, if Michael of the Zotto has a stellar game while he’s the number-one man, we should celebrate his efforts.

Against Detroit, Del Zotto led both teams in ice time at 24:52 and was one of the best players on the ice for either team with a shot-attempt differential of plus-7.

OK fine, it wasn’t anything flashy like what Karlsson does. It was more of an unnoticeable solid performance, so… more like Lidstrom? Yeah, let’s go with that.

5. An issue with the Sedins’ power play

This should be no surprise: if you spend half your power play shift and all your energy trying to get the puck into the zone, you won’t score too often.

One of the problems with the Sedins’ power play unit is they have consistent problems just getting the puck into the zone and setting up.

That may be a personnel issue because they really do miss Alex Edler when it comes to setting up their power play. Here are a few examples of that failed break-in. First, Gagner:

That one turned into an shorthanded chance for the Wings.

In this one, it takes three attempts for them to just get the puck in:

You don’t see it in the gif, but they did get it in on their third try.

If you’re wondering how Henrik had that glorious power-play scoring chance from Jake Virtanen I showed above, they started that shift in the offensive zone and maintained that pressure. That might be the way to give the Sedins their best shot on the power play.

Want to know how you become SixPack Superstar?

Here’s a sure way.

Big hit in the third period on an unsuspecting opponent when the game’s long over? Yesss.