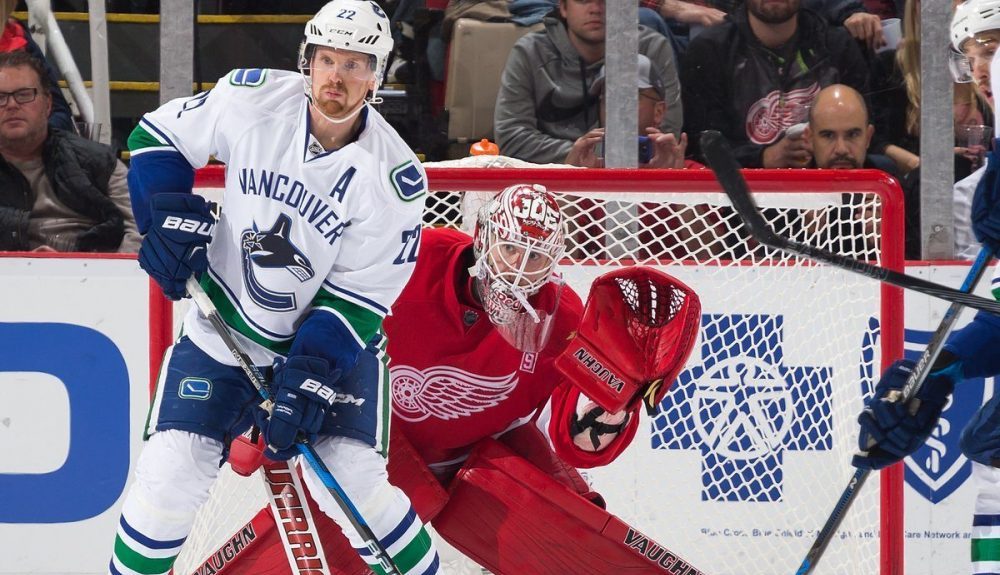 At times I sometimes wonder if I’m stuck in a Groundhog Day like scenario, destined to live out the same Canucks game, day in and day out, until I lead my life the way some higher being wishes me to live it.

Do I have to reconnect with an old high school friend who now sells insurance?

Do I have to learn to appreciate other people better?

Do I have to forgive Mark Messier for the time he spent in Vancouver?

I…I don’t think I’m strong enough for that last one.

Toaster in the bath it is!

Tonight’s game had all the usual notes we hit on in these recaps. It’s gotten to the point where I have to question myself every time I talk about them to make sure I didn’t use the same line from last year. “Wait, did I say Tryamkin was like the T-Rex in Jurassic Park last season??”

But, for the record…

The Canucks lost yet another game, this time to the Detroit Red Wings 3-1. Despite solid goaltending, there were a few defensive miscues, and the offence couldn’t make up the difference, as they eventually fell to the Red Wings. Rinse and repeat.

This one was a Corsi Special, the kind of game where the other team has so little respect for the Canucks offence that they park their bus HARD after going up a goal or two, so if you just look at the Corsi table, you’d think the Canucks deserved a better fate.

And to be fair, the Canucks did get some good chances. But again, it was like a boxer letting you have open shots because they know you can’t hurt them. So Detroit took the Canucks little jabs and simply waited them out before finishing them off.

I'm still not happy that they got complacent with a lead again. Thank god they were playing the Canucks

It is a long weekend though, and everyone on your Facebook page is probably arguing over politics, so let’s not make this all doom and gloom. Let’s take a lighthearted look at the game, shall we?

1. Too fast, too furious

Every time the Canucks run into one of the fast, skilled guys on another team, it gets a bit depressing to watch. Dylan Larkin is really fast. He’s the player you trade for in EA Sports NHL games because his OV will be lower than a superstar but his speed is off the charts.

The Canucks don’t really have that player. They had Etem, but he was like a wind up truck that you’d rev up, put on the ground, then watch as he took off in a straight line before falling over at some point.

The mean way to say it is that the Canucks are a slow team, but the nice way to say it is they’re cerebral. They’re like god damn professor X out there, man. You can have your Quicksilvers, other teams, we’ve got players that read and stuff!

The main hope for the Canucks is that they one day make the playoffs with their slow team, and then CBC can crow about what a “heavy”game they play, which is a nice way of saying they’re either fat or slow.

If you’re still behind the idea of this Canucks squad making the playoffs and either going on an extended run, or gaining valuable intangibles from making said playoffs, then you’re going to want to see the Canucks get the lead more.

This was 30 seconds into the game. The Canucks are not good at scoring. It’s something they lied about on their resume but now it’s past their temporary probation period and we can’t fire them.

Then Ryan Miller let in a poop goal.

Not that it’s necessarily a bad goal, but anytime a goalie lets in a slow trickler between their legs, it’s a poop goal. You know and I know it.

Just dangling there, then it drops.

That’s right, you are getting solid poop imagery right now.

This is what the season has come to. Very in depth, detailed poop metaphors.

Some players have to try really hard to bring a noticeable physical game, night in and night out. It wears on a player, too. Shortens careers, even. It’s why a player like Brenden Morrow will see their career start to tailspin once all that physical play catches up to them. If you’re not a fast player to begin with, losing a step due to injuries from physically grinding night in and night out can be a killer.

For Tryamkin, though? He just has to hit people and it’s devastating sometimes.

The kind of hit he makes, is the kind of a hit another player might have to skate full speed, go all out on, and end up being hurt themselves on. It’s tough to knock down other players that are bigger than you.

Tryamkin, though? He’s seven feet tall, and you can’t teach that.

It’s like a tank running over a horse. It’s not even fair at this point. He knocked Athanasiou out of the game, allowing John Shorthouse the mercy of not having to pronounce his name again. Athanasiou, by the way, is six feet two and almost two hundred pounds.

Yet there’s Tryamkin just trucking him.

This is the kind of player you want to see in the playoffs, just to see how much damage he can do to the other team.

They got the kind of goal where the goalie just simply gives up.

Part of you wants the Sedins to ride into the sunset and win a Stanley Cup somewhere, because they deserve it.

Another part of you wants to clutch them close to your chest and never let them go.

NO NOT LIKE THAT! SHE COULD HAVE MADE ROOM ON THE PLANK, DAMN IT.

Yet again, the Sedins provided some offensive spark. They don’t get quite as many dominant shifts as they used to, but they still perform magic on the ice. Throw in Woody Harrelson and Jesse Eisenberg and you’ve got yourself Now You See Me 3!

I’m so so so sorry for referencing that franchise. I am even sorrier that my editor Rob has to google what the pop culture reference is.

The Canucks did have their chances. Scoring effects or not, it felt like one of the better games recently. Heck, even Alex Burrows looked like he’d shed off a couple of years, as he was more noticeable then ever during the game.

But this team can’t score consistently. They just can’t do it. Which is why you end up with things like this:

Creating some havoc around the net, getting some shots, but nope, can’t find the handle.

As the season wears on, they’ll get some more goals in situations like that. But overall, this is not a team that creates a lot of offence. It’s hard to imagine the fabled “switch” will ever turn on at any point in the season.

There have simply been too many games where the Canucks turn the other goalie into a Vezina candidate.

6. Ryan Miller is dope because he does dope things

Ryan Miller joined the Canucks in the worst of circumstances. The Canucks had gone through a brutal divorce with their goalies, and both of them had moved out of the house. Schneider to New Jersey, Luongo to Florida.

In moved Eddie Lack, your big brother, to try and let you know things would be ok. All three goalies very affable guys in their own right.

Then your Grandpa took over the team and he told Eddie he had to get out because his side burns were too long.

He isn’t a particularly funny person on camera. He doesn’t exhibit a lot of personality in interviews. And none of that really matters, what matters is his play in nets, which has been solid.

But it did make it harder for the city to embrace him. He felt like Jim Benning’s hired mercenary, flown in to save the day, which was pretty much impossible. Nobody blames Miller for the team’s situation (he’s played quite well) but nobody was embracing him and chanting his name.

Then in the Toronto game, when Matt Martin went after young rookie Troy Stecher, Miller dropped his gloves and held Martin off. There was Ryan Miller, a guy who looks like he weights 160 pounds out of his gear, taking on Toronto’s tough guy, to save a rookie.

It was the turning point for a lot of people in embracing Ryan Miller. That night he became a Canuck for many fans.

And although Miller isn’t a super strict butterfly goalie, I have grown to love his scrambling ways. Much like I miss the days of Hasek, I now look forward to Miller flinging himself around in net. A lot of goalies are very very efficient today, but it’s also kind of bland. I get a thrill out of watching Miller dipping, diving, and dodging in net.

Even on things like a guy cutting through the crease, sometimes Miller gets overly ambitious and flies sideways like Superman.

Look at that. Dude is leaving the ice for the extra man, then here he comes to save the day, diving like a bad ass, and making a bad ass save.

I mean, I know the team lost, but that save is bananas. It’s awesome. Love it. Reminds me of Kirk McLean rushing back to his nets in the playoffs to make a diving stick save.

"I'm sick of seeing pucks go into the empty net. So I went for it." – Miller

Be your bad self Ryan. Scramble in the nets as much as you want, it’s a blast to watch.

That is certainly a delightful glimpse into one who game played for Todd Bertuzzi’s nephew vs Todd’s entire NHL career.

Pray Sidney Crosby never has a nephew make it into the NHL.

"We played pretty well and had opportunities. That's the theme. But we trust the process and will get through this." – Stecher

LIAR. But he lies like a veteran, though, so kudos.