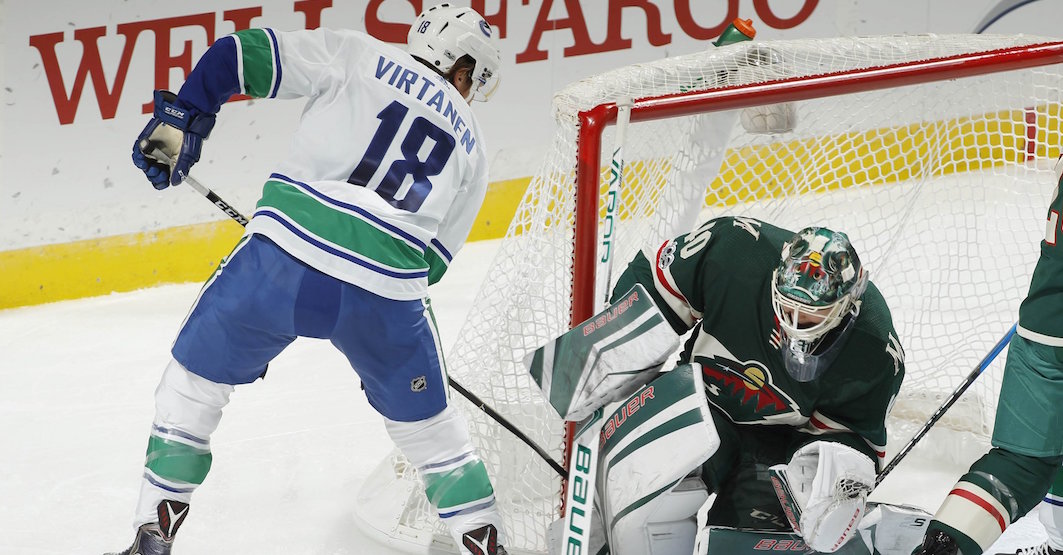 If Jake Virtanen felt good about his first goal, he must’ve felt great scoring his second.

After netting his first of the season on Sunday, Jake Virtanen scored the only goal in a 1-0 Canucks win in Minnesota on Tuesday.

Anders Nilsson picked up his second shutout in three starts as a Canuck, which must be a real ‘WTF’ moment for Jacob Markstrom, who is still looking for the first shutout of his career.

The defence in front of Nilsson played well, and the Canucks goaltender did his part with 29 saves to give the Canucks their third straight win to end the road trip.

As per Omar’s official SixPack rule, if Virtanen scores, you lead with it.

Also, it was the only goal in the game so I didn’t have much of a choice.

It was a great shift for Virtanen, who actually forced a turnover earlier in the play that resulted in another scoring chance. The Wild were able to clear, but Virtanen was already back and forced another turnover. This time he converted, putting his own rebound past Dubnyk.

It’s now back-to-back games with a goal for Virtanen.

Okay, I need to know who that voice in the #Canucks locker room was calling "Big Tuna." Which Canuck is Big Tuna?!?!

Sportsnet’s cameras caught players yelling “big tuna” in the tunnel after the game. Intrepid reporter Dan Murphy got to the bottom of it.

He says he thinks it started as Tunes. Then turned into Tuna. Then Big Tuna. Many guys were yelling it at him post game.

Are the Sedins still the Canucks first line?

Judging by their nightly ice time these days, the answer is no, but here’s the order of the lines posted on the Canucks’ Twitter.

It’s been a recurring theme this season. The twins and whoever plays alongside them are always listed as the first line, even though the deployment from Travis Green suggests the opposite.

Jeff Paterson had it right:

On the other hand, I don’t really blame Canucks Twitter guy for arranging the lines how he did. It’s pretty weird seeing Dorsett on the top line and Sedins as third liners.

We were told coming in that Green likes his vets, so should we really be surprised to see Dorsett and Sutter leading the forwards in minutes?

Yes. We should still be surprised.

We knew he liked his vets, but Dorsett had over 18 minutes tonight, more than 15 of those spent at even strength. That’s too much.

By the way, Dorsett and Sutter were the worst two forwards in shot differential for the Canucks.

3. Sedins & Virtanen: A story of mutualism

It’s only been a few games of Virtanen playing with the Sedins, but I’m ready to say it.

That line needs to stay together all year.

At this point in their career, Henrik and Daniel look like they really need someone with Virtanen’s skillset.

The twins still dominate once they’re in the zone, but they need help getting there. That’s where the speedy Abbotsford winger comes in.

Often times, like in the play below, Virtanen can make a rush or dump and chase the puck himself, before passing it off to a Sedin to get set up.

It’s perfect actually, because Jake has always been a north-south type of player. He’s used to rushing the puck into the zone. However, the Sedins are cycle players, and getting Virtanen to play that style is good for his development.

Virtanen can get tunnel vision from time to time, but actually makes nice passes when he’s looking for them. Is there any better way to get him into the routine of looking for those passes? He’s playing with the two best passers in Canucks history now.

I put it twice for emphasis, because I know he has a lot of doubters.

The backlash on Twitter when the Canucks acquired him for a fourth round pick and Andrey Pedan honestly surprised me.

Pedan had just cleared waivers, so it was essentially Pouliot for a fourth. If you draft a fourth rounder and when he’s 23 years old he’s as good as Pouliot is now, you would call that a win.

For all those billing him as an offensive defencemen, he strikes me more as a two-way guy. He always seems to make the right decisions with the puck, and often makes that all-important good first pass.

Not bad for a fourth rounder.

sometimes life just ain't fair. Jacob Markstrom has never had a shutout in 100+ #NHL starts. Anders Nilsson has 2 in 3 starts for #Canucks

Markstrom’s gotta be wondering what he has to do. Still no career shutouts for the big man, and then in walks this other big man, and he seemingly picks up shutouts like I pick up pieces of carrot cake. In other words – very easily.

Oh yeah, I almost forgot about this. 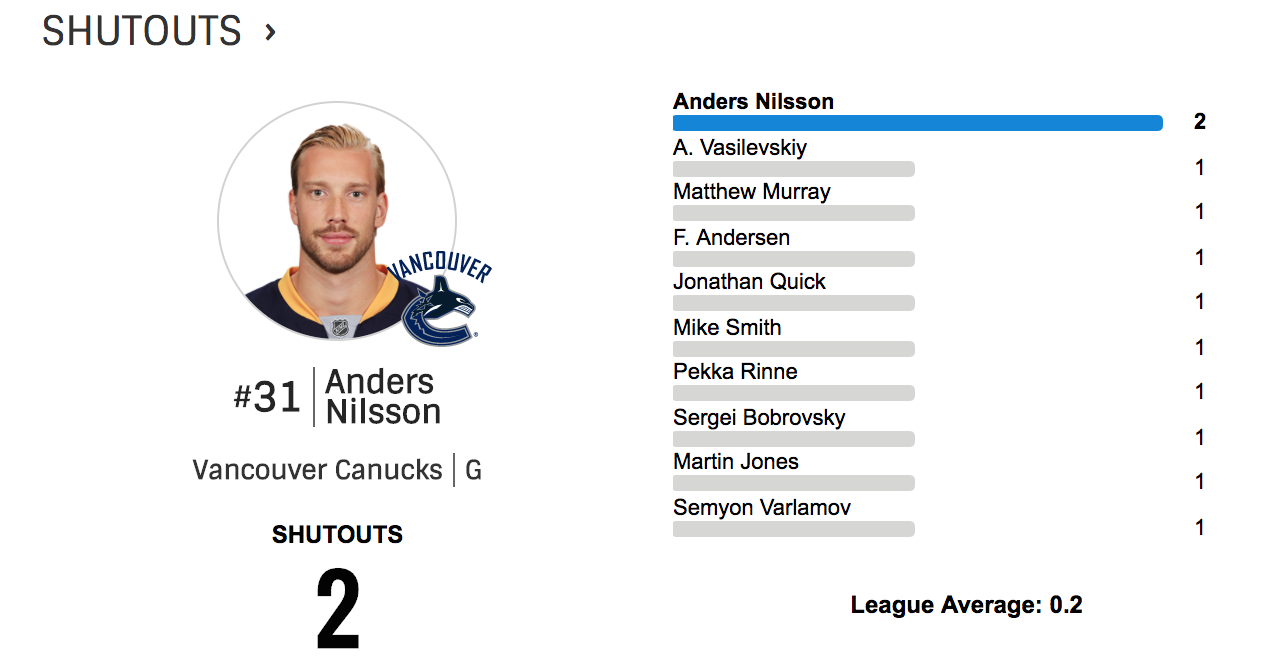 Anyone got him in fantasy?

When you lay out like this to block a shot in the dying seconds of a one goal game, you deserve Superstar status.