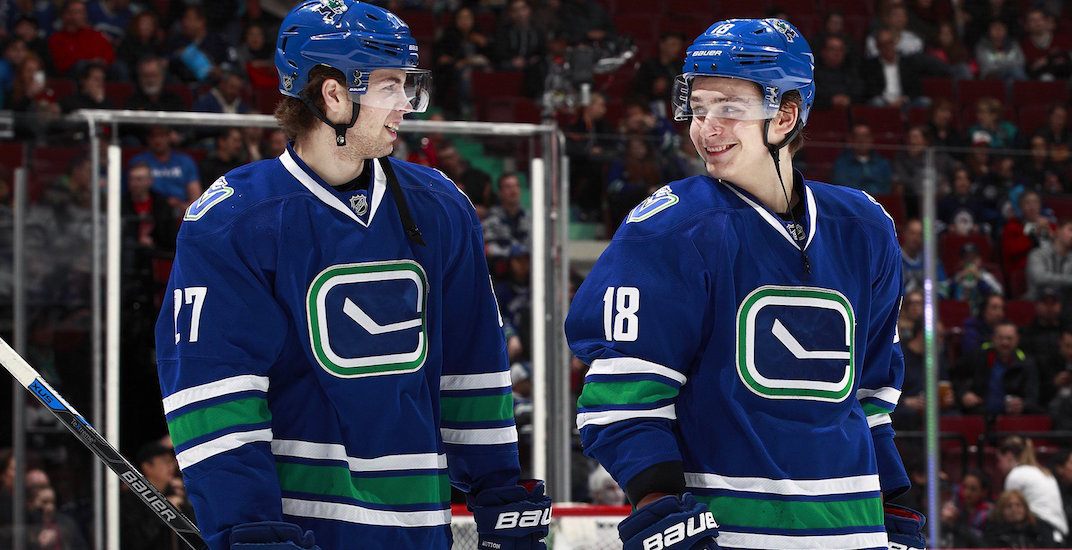 If you’re a fan of predictions, here are a couple: first, there will be a lot of skin shown on Instagram tomorrow; second, the goals should start flying in off Jake Virtanen’s stick.

Okay, the first was a cold take. Not buying the second one? Stick with me for a minute.

We’re going to take a deeper look into how Canucks skaters are performing and you’ll start to see how quietly dangerous Virtanen has been at the offensive end so far.

First, let’s look at a measure called expected goals-for. Using a formula that looks at shot locations, number of shots, and other inputs, corsica.hockey’s expected goals estimates how many goals a player would have with variables such as goaltending and puck luck taken out.

Note that all charts in this post are based on 5-on-5 play only. 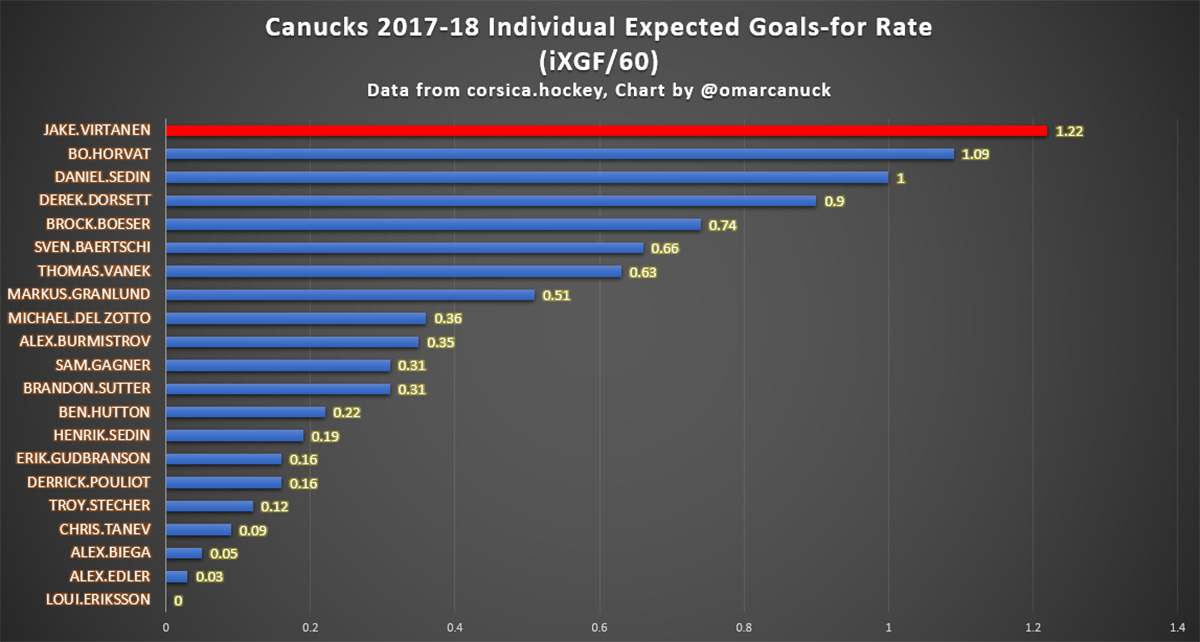 Here, you can see Virtanen would lead the team in expected goals if all players were playing an equal amount of time.

This chart is similar: individual shot attempts by each player. 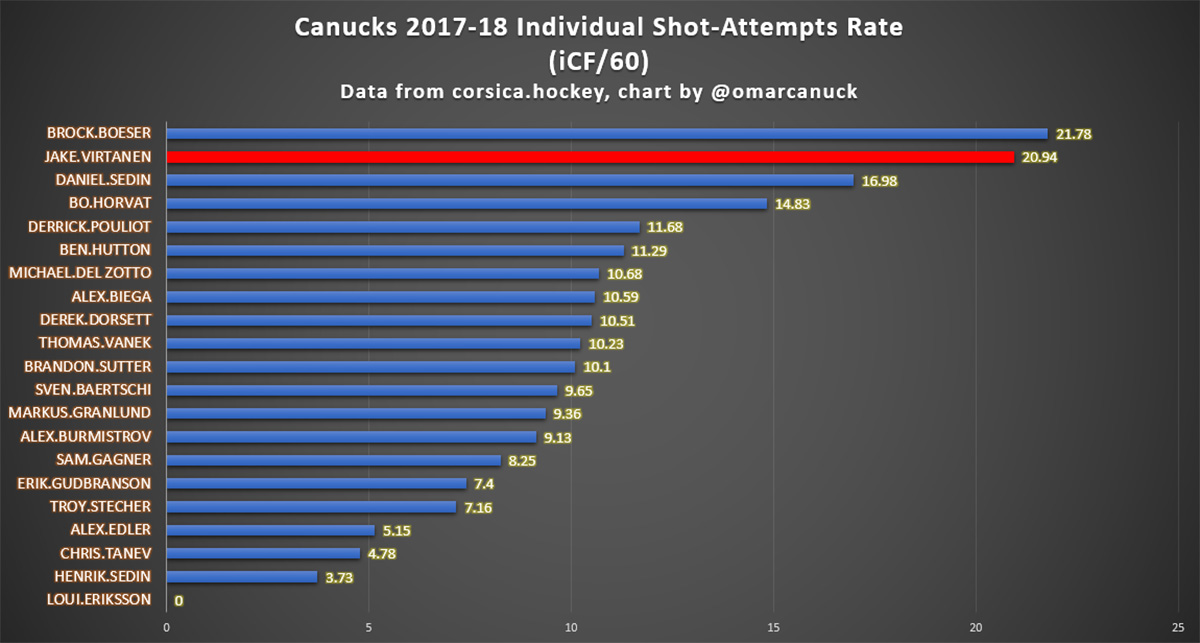 Again, Virtanen’s shot production is very near the top of the Canucks with only Brock Boeser’s above his and Daniel Sedin’s right below.

What these charts show is that when Virtanen has been on the ice, he’s been creating more scoring chances than most of his teammates. You’re aware, of course, that he’s had to work hard to earn more playing time from Travis Green early this season.

If you’re wondering why Virtanen has only scored one goal despite these strong underlying numbers, here are two reasons: shooting percentage and playing time.

Let’s take a look at that shooting percentage. 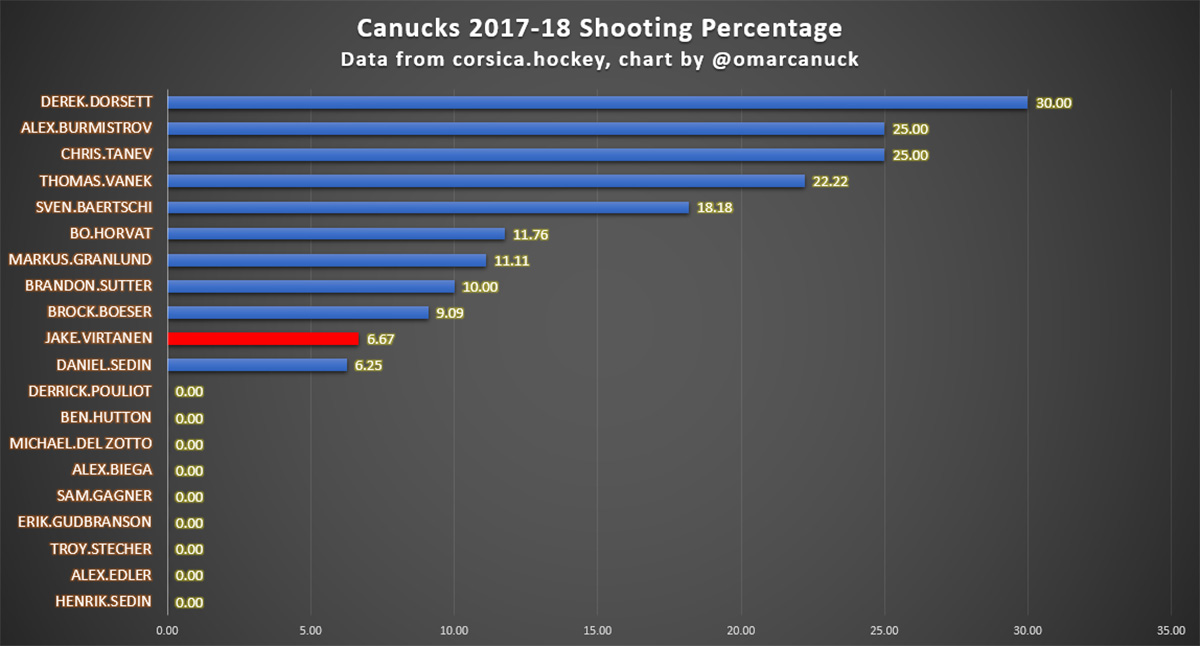 His shooting percentage of 6.67 percent shows that the pucks he’s getting to the net have not been going in too often. This could mean he has a soft, easily-saved shot, but we know he has one of the harder wrist shots on the team so that’s not it.

The average 5-on-5 shooting percentage for NHL forwards from the start of the 2016-17 season up until today’s games is 9.3 percent.

With Virtanen having an above NHL-average shot, it’s a good bet that Virtanen’s shooting percentage moves even higher than 9.3 percent for the rest of the season.

See where this is going?

Comparing Virtanen to the rest of the league

Virtanen’s shot attempts and expected goal rates are not only high for Canucks players, they’re strong by NHL standards.

Here are the top-25 ranked players in the NHL in expected goals-for rates. 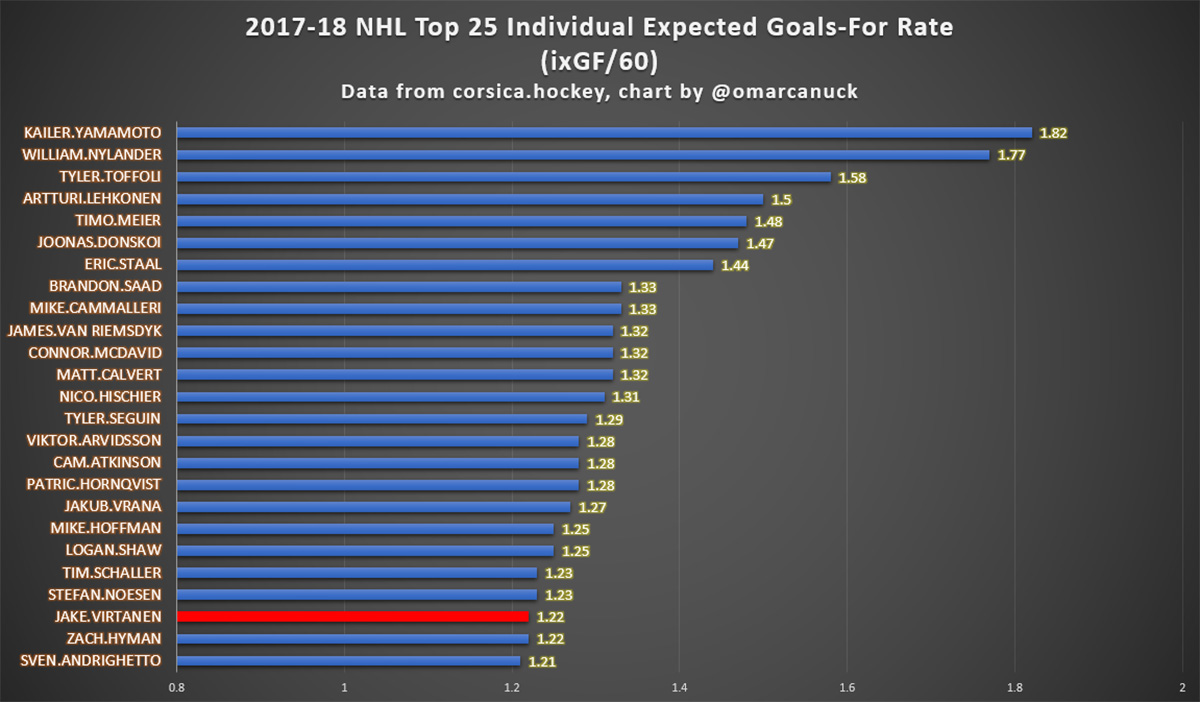 And here are the top-20 ranked players in the NHL in individual shot attempts. 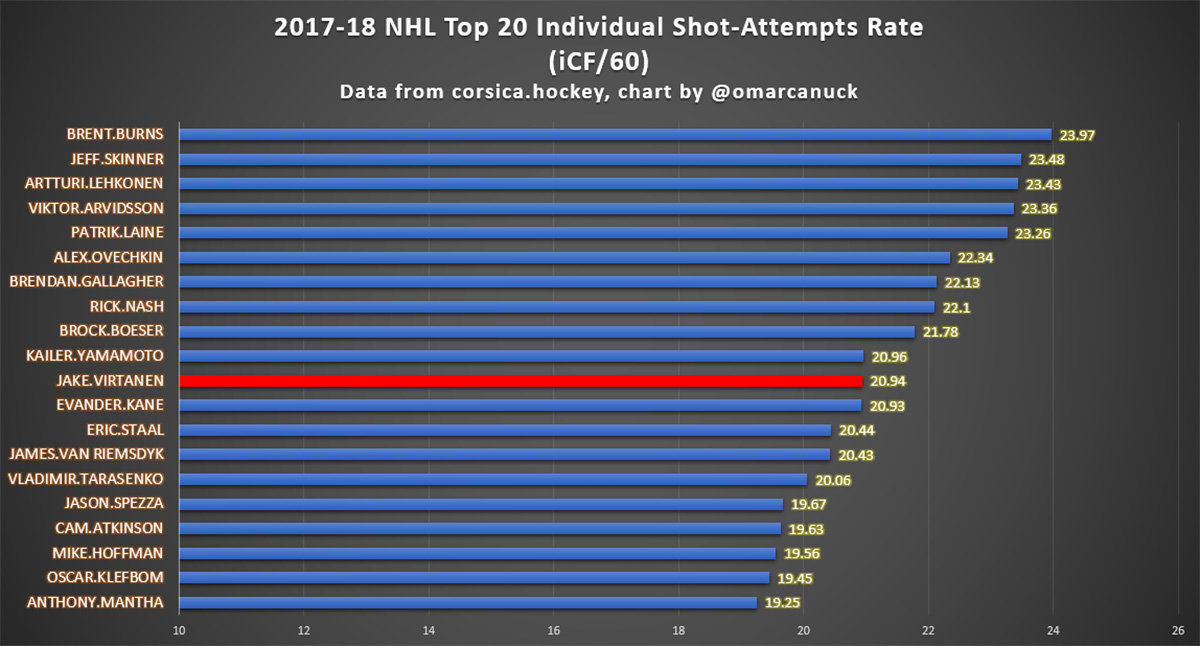 You can see Virtanen’s up there with some heady company in terms of NHL goalscorers.

Again, shooting percentage and playing time have held him back from breaking through.

Virtanen’s ice time has risen steadily as the season began, and for two games he’s been playing with the Sedins. During Sunday’s game against Detroit, he played meaningful minutes during the third period for the first time this year and he also saw time on the power play.

And if the bounces start falling his way, he may yet turn into that treasured power forward the Canucks dreamt of when they drafted him.