You may not want to hear this, but the team needs more losses like Tuesday’s 6-2 loss to the Wild. They need to lose.

The Sedins put up three points. Their line’s corsi plus/minus numbers were plus-15, plus-14, and plus-13 (even strength, from hockeystats.ca), and they took 10 shots on net. In a 6-2 loss.

They are still elite players, but they need help if they want to win a Stanley Cup.

They need one or two elite young forwards behind them to help with scoring.

They need a stud defenceman – the kind this team hasn’t had in a long time.

The only way to get these is through high draft picks, so they need to lose. Thing is, it’ll take a little patience from all of you and that’s the hard part.

We also have to hope the Sedins can keep playing like this for another couple of years.

Once Vancouver gets that elite talent, they’ll need to fill out the roster with a strong supporting cast. They’ll need to make shrewd moves like Chicago did getting Marian Hossa and Brad Richards. They’ll need to assemble a puzzle under the salary cap.

Will Jim Benning be able to do that? Based on some of the contracts he’s signed Canucks players to, I’m skeptical. But that’s a discussion for another day.

1. How they lost such a stinker

First, the game was over after two periods at 6-1, so I won’t bother talking about the third.

Even strength shots after the second period were 22-21 Minnesota. If you included their five power plays (Vancouver had none), shots were 36-21 through two.

The Wild scored on three of four power plays through two, so the penalty kill was obviously a huge problem.

Horvat caught in no man’s land on Koivu’s goal pic.twitter.com/u9rSHlcmGN

That’s what you get when your defensive pairings behind Tanev-Edler are 1) a guy who was known as an inconsistent player in Boston playing with an AHLer and 2) a rookie playing with a small guy suited to a #6 role.

It’s also what happens when your second line is made up of a rookie centre playing with a winger who isn’t ready to work hard.

The winger I’m talking about is Chris Higgins, by the way. Most of the criticism he comes under is unfounded because points come and go, and Higgins has been a hard worker for most of his career. You couldn’t really ask for more.

Here he is looking aimless on a forecheck early in the second period, when the Canucks were still in the game.

By the end of the game, Higgins was the worst of all skaters with a corsi of minus-19, all situations. He was on the ice for 8 corsi-for events and 27 corsi-against.

So if you’re looking for the reason the Canucks lost – they have a poor roster.

Could some of them play harder? Sure, but everyone on this team has to play their best game every single game for them to even have a chance to win.

If Brandon Sutter wasn’t injured, they’d be better. He would’ve taken a ton of pressure off Bo Horvat and the rest of the team – especially on the penalty kill. And with that PK being so bad, they really could use his help.

They’d be better with Luca Sbisa and Dan Hamhuis in that D core too.

But what then? They’d be in one of those three Pacific Division playoff spots and that’s all. They wouldn’t be a contender, just a little better.

All these injuries might be a blessing in disguise, and they may force the team to do what they didn’t want to do.

Tanking is ugly and it takes a while to look good, but hey, so did this guy. 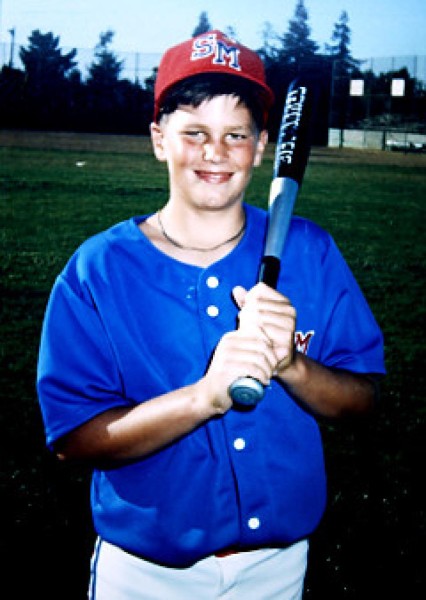 (Don’t recognize him? He’s the best QB in the world now… see it?)

When Benning chose Miller over Eddie Lack this summer, it was for stretches like these. He was kept for his experience, for his ability to keep his head during rough patches (admittedly this is more of a rough roll of fabric than a patch), and to provide leadership and a strong role model for the younger goalies and other skaters.

This should not be forgotten.

Many were expecting a blow up from him after the 6-2 loss, but he was measured and calm, and he took the heat.

#canucks Miller “it’s my job to solve problems and I couldn’t solve enough of them.”

But that was after a period of cooling down.

After the fourth, fifth and sixth goals, his reactions were more telling.

Not exactly the maturity and kick-in-the-pants you’d hope for from him, but I guess any goalie would take it hard. More important is how he reacts in the upcoming days, and how he bounces back.

I asked Twitter what they thought Miller would say after the game.

He didn’t go there.

He probably wants to go there.

Benning terrified that Miller is going to demand a trade

Might be a good idea, but they’re stuck in this marriage now.

5. The third period of the year

Our sports editor had this horribly morbid thought somewhere during the second period.

This is incredible. Starting to feel like the Torts era again.

And Jay had this moment of clarity afterwards.

We’re only a home blowout away from a jersey toss and getting heckled by Oilers fans because they’d *never* do such a thing. Because loyalty

It made me think it won’t be long until fans are chanting “FIRE ____” at Rogers Arena.

Let’s be straight, I wouldn’t bother firing anyone. The time will come to bring in the right coach and GM to put a contender together, but right now it’s tank time.

Still, I wonder where the average fan’s head is at, so I asked.

@omarcanuck the canucks look dismotivated and underprepared. Thats a reflection of poor coaching. This kind of game is grounds for a firing

@omarcanuck Gulutzan. PK is absolutely abysmal. They panic and they get deflated.

On those last two – yes the PK has been abysmal lately, but a) think about the personnel b) if Willie sees a problem there, he can tell Gulatzan to fix it and tell him how.

Don’t forget this is the same Gully who’s coached a great PK the past two years.

6. The choice on the kids is obvious

Not many think the Canucks are doing the wrong thing sending Jake Virtanen to the World Juniors. With him and Sven Baertschi alternating games on that third line wing, Vancouver has the depth to cope.

Virtanen will be one of the leaders of Team Canada, and might even be the captain. TSN 1050’s Dave McCarthy asked Virtanen if he’d like to wear the C yesterday:

“There’s a lot of guys that could deserve the captaincy but it would be an honour to wear that C. A lot of the returning guys could deserve it.

It’s really up for grabs but if I got to wear it, it would be an honour.”

Canucks fans would enjoy that.

Another thing they’d enjoy – seeing Jared McCann on the team as well.

@omarcanuck not in the least. When things were going well it made sense but things have gone off the rails. Should be going to the WJC

Look, I’m not one for the “develop players in a winning environment” argument. Taylor Hall and Jordan Eberle are looking great after years of playing on crappy teams with bad coaching and management.

I’d also say the Canucks are better with him on the roster. You’ve seen my thoughts on how much that matters already in this post.

Bottom line – McCann will be one of the offensive leaders of Team Canada, probably even more than Virtanen.

Even better – he’ll have fun.

Given his only chance for a fun holiday in Vancouver is watching the Force Awakens and hitting up Richmond’s escape rooms, the choice is pretty clear.

Note: Huge thanks to Ryan Biech – the best giffer in town – for the gifs in this post.