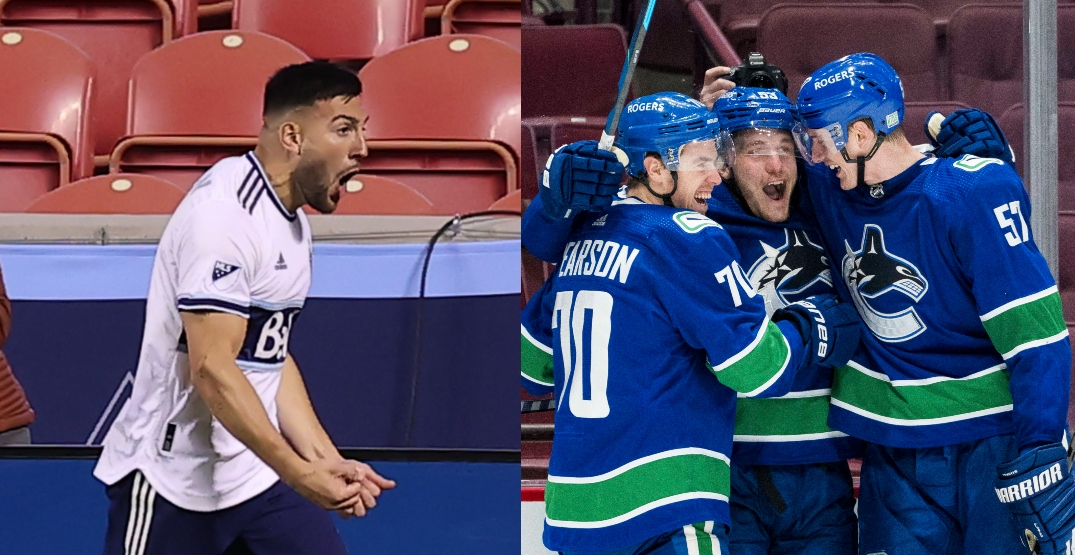 Playing their first game in nearly four weeks following a COVID-19 outbreak within the team, the Vancouver Canucks were heavy underdogs against the division-leading Toronto Maple Leafs.

Despite that, the Canucks pulled off a gutsy victory under less than optimal circumstances. They were still missing Thatcher Demko, Nate Schmidt, Jake Virtanen, Tyler Motte, and Olli Juolevi from their lineup due to reasons related to COVID-19. Making matters worse, Elias Pettersson is still missing from the lineup due to injury, and Alex Edler was ejected midway through the game.

But Canucks captain Bo Horvat stepped up, scoring two goals and an assist, including the game-winner in overtime to lead his team to victory.

Judging by the on-ice reaction of the players, this win was extra special.

The Vancouver Whitecaps also had a difficult challenge in their first match of the 2021 MLS regular season.

Playing against a very good Portland Timbers team, while the Whitecaps are still settling into their temporary home in Utah, they pulled off a 1-0 win.

The Whitecaps were missing a number of key players, including Ali Adnan, due to visa issues, while newcomers Bruno Gaspar, David Egbo, and Caio Alexandre hadn’t trained with the team because they were in quarantine.

Lucas Cavallini was in the lineup, though, and the Whitecaps’ star striker scored the lone goal of the match.

The Canucks-Whitecaps double was the first time the two teams won on the same day since March 31, 2018. To give you an idea of how long ago that was, the goal-scorers for the Canucks on that day included Darren Archibald, Nikolay Goldobin, and Jussi Jokinen. Brek Shea and Kei Kamara netted goals for the Whitecaps.

#Canucks and #VWFC win on the same day for the first time in more than three years.

But the good news doesn’t stop there. Also picking up a win on Sunday were the Vancouver Giants, who shut out the Kamloops Blazers 4-0, which pulled the two teams into a first-place tie in the BC Division.

RECAP: @tristen_080 scored three times, and @trent_miner recorded his fourth shutout as the G-Men prevailed 4-0 over the Kamloops Blazers.

So yeah, it was a pretty good day for Vancouver sports fans.