@Headtothenet
Head to the Net will be providing weekly previews for upcoming Canucks games throughout the season. Instructions for viewing: read our weekly previews, get pumped. Simple enough?

If you watched the first preseason game between the Ducks and Canucks, you know that Anaheim has not lost its identity as the jerkiest team in the NHL. If we could figure out a way to make money each time the words “grit” or “sandpaper” are uttered by commentators during this game, HTTN would be rich. (If you’ve got any ideas, let us know)
Watch out for:
George Parros – Not only did this man inspire “Movember,” judging from his actions in Monday night’s game against the Blues, you can see that he will do pretty much whatever it takes to get under the opposition’s skin. Check out the following video:
Friday October 15 – LA Kings
Is there anything better to watch in sports than a good, old fashioned grudge match? The Canucks will surely feel that way towards the Kings after they ruined Vancouver’s grand opening night festivities only one week prior.
Watch out for:
Like Harry Potter, Drew Doughty is a wizard. His one touch pass to Dustin Brown that set up the Kings’ powerplay goal against the Canucks late in the third was magical. A simple tap, that’s all it was, yet that play relieved all the pressure on Brown, who then had a clear play towards the net. It’s almost as if Doughty saw it in his head before it happened on the ice.
Sunday October 17 – Carolina Hurricanes
Yes, I know Sunday is technically next week, but do you really want me to write a preview on a Saturday? Would you even bother reading it on the weekend? Didn’t think so.
Vancouver is stop number 3 on the Hurricanes’ world tour. If you look at the way they are kicking off their season, it’s clear that they wanted to know what it feels like to be Justin Bieber. Look at the way they are kicking off their season: after playing two games in Finland, they come back to North America to play 5 more road games all over the continent before finally playing first game in Carolina on October 27.
Watch out for:
Like Harry Potter, Jeff Skinner is just a teenager. As if that weren’t cool enough (being compared to Harry Potter and of course Drew Doughty through the obvious correlation), Carolina’s first round draft pick from this past summer is quickly making his case to stay in the bigs after scoring the shootout winner in game 2 against Minnesota. 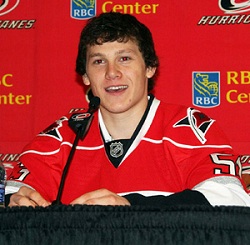