With the Canucks on a 6-game winning streak, even Tony Gallagher is finding it hard to find negatives about the team right now.

After screwing up his first cracks at free agent signings with Pavol Demitra and Steve Bernier, Mike Gillis has earned a gold star with his ability to learn from past mistakes. The Canucks’ new third line, two-thirds of which were free agents this past summer, is contributing in every way possible, with Raffi Torres picking up the NHL’s first star award for the past week, after leading the league with 5 goals during that time.

During his streak, Torres has shown many signs of exactly what Bernier lacked. That is: a quick set of hands in front of the net and the presence of mind to not panic. Basically, he takes advantage every time he has an opportunity to score. 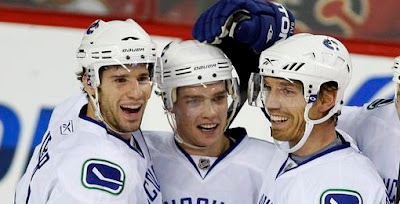 Despite Torres’ torrid streak, HTTN’s Canuck to watch this week is Mikael Samuelsson. Following his nifty redirected goal during the Canucks’ game against the Red Wings that may have been a touch lucky, he appeared to regain a lot of the confidence and energy he’s been missing lately. He was battling hard and putting pucks on net like the Sammy of late last season. Don’t be surprised if we see the old “They can go f*** themselves” Samuelsson back this week.

Back to the Canucks winning streak – where the hell did it come from?! Last week’s preview had the Canucks about to face 3 tough tests, plus the Devils, who could have easily caught the Canucks flat-footed coming back from a long layoff.

But the team responded to the challenge in a big way – winning all 4 games and scoring twice as many goals as their opposition (16-8) in the process.

With their first eastern roadtrip upon them, facing the conference that they have simply owned lately, (23-11-2 in the last 2 years) it would not be a surprise if come next Monday, we are writing about the Canucks extending a 9 game winning streak. 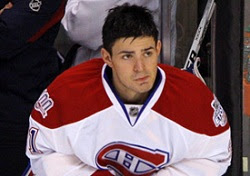 The Canucks only play the Canadiens twice a year, and last time they met, the Canucks dominated. One obstacle stood in their way, and that was goaltender Jaroslav Halak, as he turned away 47 shots in that game to lead his team to a 3-2 victory.

As everyone is aware, Halak was traded to St. Louis in the summer in order to allow Carey Price to take his rightful spot as the #1 man in Montreal. And, despite being booed by the harsh Montrealers in the pre-season, he has played quite respectably since, earning first star honours for the Canadiens in the month of October.

Who to watch:
New team captain Brian Gionta has managed only 4 points on the season so far, but in the Canadiens’ last game, he finally scored a goal, ending a drought of 8 games. He still leads the team in shots (with 54) by a large margin, so it’s probably more a lack of puck luck than effort, and after his last game, this could be shifting.

With their win over the Canadiens, the Senators are above .500 for the first time this season, which is no small feat after a 2-5-1 start.

More importantly, in their last 8 games, they’ve lost only 2 games.

To summarize, the Senators are hot, and with their top line of Jason Spezza, Alexei Kovalev and Peter Regin all of a sudden firing on all cylinders – 10 points in their last 2 games – the Canucks will have their hands full. 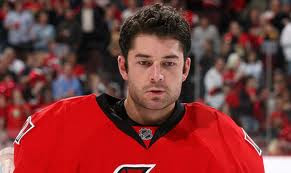 Who to Watch:
I don’t know exactly how a team can watch a goalie closely – “Hank, you’re shadowing Elliot tonight, he’s got crazy moves back there!” – but Brian Elliot has been on fire lately, with a personal record of 7-4-0 on the season so far.

As could have been predicted, the Maple Leafs have already squandered their 4-0 start to the season, and they now sit at 5-5-3. However, the Canucks should not take this team lightly if past experience is any warning.

Despite being far inferior to the Canucks in recent times, Vancouver’s games in Toronto in the last 2 years are standout moments. Two seasons ago, the teams went to a shootout which was decided in storybook fashion by none other than Mats Sundin, the $10 million dollar man. 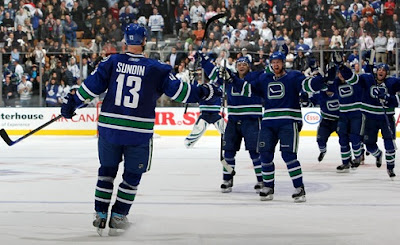 And last year, after being down 3-0 after the first period, the Canucks rallied on the back of Luongo’s replacement, Andrew Raycroft, who celebrated the 5-3 comeback by doing victory laps to a cheering crowd at the ACC.

The game also went a long way in convincing the east based hockey writers that Henrik Sedin deserved the Hart trophy, as the Sedins led the charge with 5 points.

Who to watch:
If the Canucks had a single former Maple Leaf on their roster, I’d warn Toronto to watch out for him, since for two years in a row, they’ve been backstabbed by players who obviously never liked playing in the blue and white in the first place.

But I’m supposed to be bringing a dangerous Leaf to your attention here, so I’ll go with Clarke MacArthur, who boasts a rating of plus-6 while leading the team in points, with 11.