After an impressive win over the Minnesota Wild in a tough road rink, the task doesn’t get any easier for the Vancouver Canucks as they get set to take on Jamie Benn, Tyler Seguin, and the Western Conference leading Dallas Stars. Hopefully the Stars had a few extra helpings of turkey and mashed potatoes during American Thanksgiving because these guys can flat out fly.

It’s amazing what a couple days between games can do for a team. After a less than impressive effort against the New Jersey Devils on Sunday night, one could be forgiven for thinking the Canucks’ upcoming road trip would look a lot like their last one (1-4-2). Those thoughts have been at least temporarily set aside after Vancouver put together a solid effort on Wednesday. It was only the Wild’s second loss in 10 games at the Xcel Energy Center.

From the Minnesota Wild to the ex-Minnesota North Stars, it only gets more difficult. The Dallas Stars are 8-2-0 in their past 10 games and possess an offence that scores 3.55 goals per game. Let’s just say this could be one hell of a “statement game” for Vancouver. At the moment, Jamie Benn and Tyler Seguin are continuing their assault on the scoring race that they began last year, sitting 2nd and 3rd respectively in points behind Patrick Kane. Shutting down those two would go a long way to securing a second straight victory.

What a front line. Top three #Canucks scorers have 15 goals and 37 points in their last 10 games. We’re thankful. pic.twitter.com/VbjOIAMqA1

Fans in Vancouver have long been witnesses of something special. The Sedin twins are without a doubt the best set of twins to ever play in the NHL. The no-look passes and sublime offensive zone occupation have become commonplace over the last 15 years.

Daniel and Henrik, with 25 and 22 points respectively in 23 games, are on pace to have their best combined full seasons since 2010-2011. Among the league leaders in points, what has been particularly impressive is the fact that the Swedish all-stars are doing so at age 35.

Among players over 30, the Sedins are first (Daniel) and tied for third (Henrik) in points. I’ve long said that the style of play the Sedins employ will allow them to play effectively until their late thirties and regardless of when they actually do retire, they received a vote of confidence from their current GM Jim Benning.

Jim Benning says as far as he's concerned, the Sedins will retire as #Canucks. Hear more of what he has to say here: https://t.co/02bNLyp1ab

Before Sunday’s last second buzzer beater, Radim Vrbata had been mired in a pretty awful slump. His 74 shots on goal had led to just 3 goals. Scoring on just over 4% of his shots, Vrbata was converting at a rate less than half his career average of 9.5%.

That led stats junkies and optimists everywhere predicting Vrbata would be back on track soon. The Czech native now has 3 goals in 2 games and appears to have found some chemistry with rookie Jared McCann.

Reliable scoring from a line not including the Sedins would force opposing teams to change their game plans, so let’s hope Vrbata, McCann, and Higgins can elongate this good stretch. 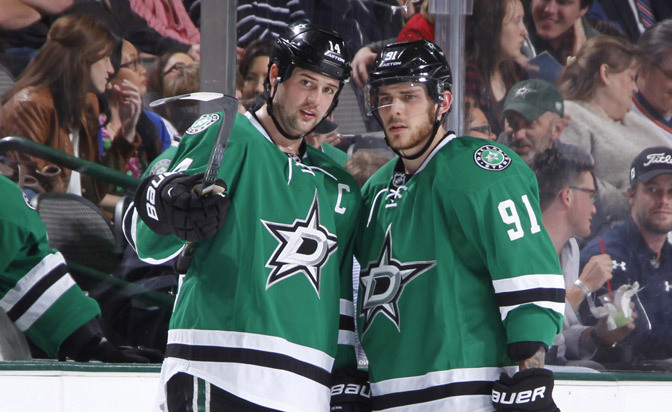 Coming into the season, the talk around the Dallas Stars was their offence. Already with the reigning Art Ross Trophy winner in Benn and the electric Tyler Seguin among other important pieces, the addition of Patrick Sharp and the emergence of rookie defenceman John Klingberg have added to a very exciting Stars team.

Benn won the Art Ross last year in style, scoring a hat trick and adding an assist in his 82nd game to outpace Sidney Crosby and John Tavares. He’s continued his torrid scoring rate this year and with a healthy Tyler Seguin, the Stars are second in the league in goals per game behind the Montreal Canadiens.

Benn showed what he can do to the Canucks in their first meeting this season, notching the overtime winner. Let’s not let this happen again…

Jake Virtanen and Andrey Pedan were the extra skaters at practice yesterday, so it appears Sven Baertschi will draw back in alongside Bo Horvat and Alex Burrows.

After watching the Dallas Cowboys take it on the chin from the Carolina Panthers, one can only hope the Canucks want to provide a similar punishment to the hometown Stars. Leading the Western Conference and the Central Division by 3 points with a game in hand on St. Louis, Dallas is obviously a force to be reckoned with.

If Vancouver plays like they did for the final two periods in Minnesota, I like their chances. Some consistency is all we’re asking for! Canucks win 4-2.