The Vancouver Canucks home stand continues with a tilt against the Jack Eichel-led Buffalo Sabres.

The Canucks lost 4-0 to the much hated Boston Bruins on Saturday night in a game that honestly left me speechless. The Canucks offered up nothing in the game.

The Canucks had zero pushback in them. Not all losses are created equal and Saturday night’s was a devastating loss for a team already sliding badly in the standings.

I don’t know if this more sad commentary or not, but Brandon Prust’s nut-seeking spear on Brad Marchand late in the game, a spear for which Prust was fined $5000 for, appears to be the only memorable moment in the game.

It is not often that one can get excited about the Canucks playing a fellow cellar-dweller, but the Buffalo Sabres are an intriguing team. In fact, the Sabres are a young team that many fans wish the Canucks could be. If you are going to lose, at least lose with some young exciting players rather than the same old, same old.

The Sabres are headlined by 2015 2nd overall draft pick Jack Eichel. The rookie has put up some impressive numbers early, with 9 goals and 5 assists in 27 games. Eichel has that quick release and heavy shot that a lot of the young, elite players seem to possess.

Buffalo is led in scoring by Ryan O’Reilly, but have a bevy of players that you should keep your eye on. The Sabres roster boasts Vancouver Giants alums Evander Kane and Cody Franson, along with Sam Reinhart and Rasmus Ristolainen. They may be struggling right now, but this is a team that will be a force in years to come.

As painful as watching the Canucks has become, perhaps some will take solace in celebrating the West Coast Express. Tonight the Canucks will pay tribute to Markus Naslund, Brendan Morrison, and Todd Bertuzzi. The line represents an era in Canuck hockey in which offence came first. The West Coast Express, which stayed intact from 2002-2006, became one of the best and most productive lines in all of hockey.

The timing of this celebration is ironic. Just as the Canucks seem to play not to lose (it’s not working by the way), the team celebrates the iconic line that was the poster child for aggressively going for the win.

Anyone missing Marc Crawford these days?

Not sure why you would tag a 3rd line center like Sutter as a "foundational player." #Canucks

Jim Benning called Brandon Sutter a “foundational player” when the Canucks GM traded for him in the off-season and, not surprisingly, this was met with raised eyebrows by many. The reality is that Benning’s statement appears to be a truism.

Ryan Biech wrote an excellent article on the Canucks faltering penalty kill and correctly identified the loss of Brandon Sutter to an abdominal injury as a key to the Canucks penalty killing woes.

The reality is that Sutter is an extremely valuable and important player for the Canucks. Sutter makes the penalty kill better, but he also is the Canucks best option to centre a shutdown line. His inclusion in the lineup takes pressure off of young centres Bo Horvat and Jared McCann.

Simply put, the Canucks forward lines make sense with the inclusion of Sutter. Without him, it is a complete mess. 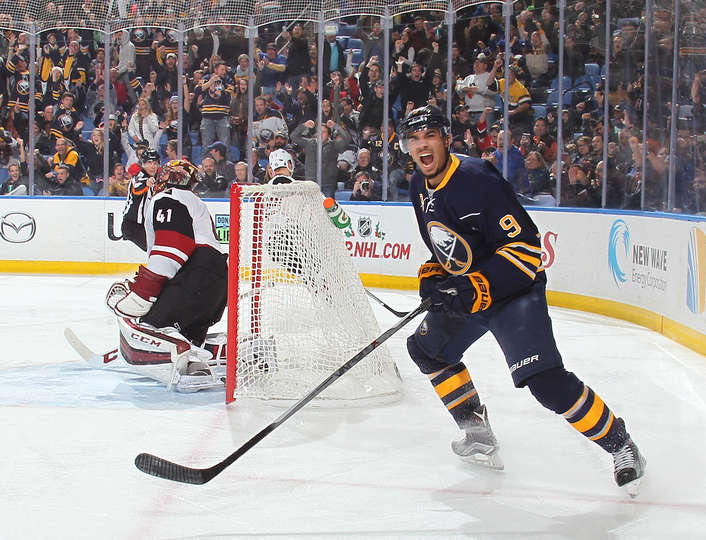 It will be a homecoming of sorts for Vancouver Giants alums Evander Kane and Cody Franson. Both players are in their first season with the Sabres.

Kane has had early injury issues, but is scoring at a decent clip. In 17 games, Kane has amassed 6 goals and 4 assists. The young and speedy Sabres appear to be a good long-term fit for the one-time 30 goal scorer.

While Franson did not cash in like most expected as a UFA in the off-season, the Sabres appear to be a good fit for the 6’5″ native of Sicamous, BC. Franson is a right-handed defenceman, who excels on the power play, that seemingly every NHL team covets.

No doubt there will be more than a few Vancouver Giants jerseys visible around Rogers Arena tonight.

Derek Dorsett missed practice and appeared to hurt his hand during a first period fight against the Bruins’ Zac Rinaldo, but is expected to play.

Based on practice, Alex Biega should slot in for either Yannick Weber or Matt Bartkowski. Sven Baertschi will draw back into the lineup, in place of Ronalds Kenins.

As always, we’ll update this section after the game day skate.

The Canucks are coming off one of the worst performances I have seen in a very long time with an absolute pathetic effort against the Boston Bruins on Saturday night and the Sabres will be trying to rebound from a 4-2 loss to the Edmonton Oilers last night.

The Canucks lose this one 3-1 and Jim Benning spends most of the 3rd period on the phone talking trades.