No rest for the weary as the Vancouver Canucks play tonight in Detroit against the Red Wings just 24 hours after suffering a 2-0 loss to the Philadelphia Flyers. Although the Canucks played a lot better last night than they did in their Tuesday night loss to Minnesota, their lack of depth is certainly being exposed. So far on this six-game road trip, the Canucks are 0-3.

The host Red Wings sit in third place in the Atlantic Division with a 16-9-6 record for 38 points in 31 games. Detroit has lost two straight heading into tonight’s game, their most recent game being a 2-1 loss to the Buffalo Sabres on Monday night. They will be much more rested than the Canucks, who have played two games since the last time that the Red Wings played.

The Canucks could be without captain Henrik Sedin for tonight’s game. He did not come out for the second period in last night’s game against Philadelphia due to his lower-body injury.

Henrik Sedin, who left the game early in the 2nd, has a lower body injury and will not return tonight. #Canucks

After the game, head coach Willie Desjardins did not have much of an update, other than it wasn’t a new injury.

Coach: No update on Henrik Sedin, but someone will be recalled from Utica. #Canucks — Vancouver Canucks (@VanCanucks) December 18, 2015

If Henrik’s injury is serious, it’s obviously a big loss for the team for so many reasons. He’s their captain and leader, the first-line centre, and second-leading scorer on the team (31 points in 33 games). With Brandon Sutter already out, an absence would leave the Canucks woefully thin down the middle with Bo Horvat, Jared McCann, and Adam Cracknell.

*Update: Henrik Sedin will miss tonight’s game, Linden Vey has been called up

2. No World Juniors for Jared McCann

Today was decision day with respect to Jared McCann and the World Junior Hockey Championship. On Monday, Rob Williams wrote a good article explaining why it would have been a good idea to send McCann to play for Canada in Finland later this month…but that was before last night’s injury to Henrik Sedin.

TSN’s Darren Dreger provided an update on the situation this morning:

The only good thing about the timing of Henrik’s injury is that it might have helped make the McCann decision easier for Canucks management. If Henrik misses any time, McCann leaving would have left the Canucks with only two NHL-calibre centres in Bo Horvat and Adam Cracknell.

3. Be careful what you wish for (the youth movement) 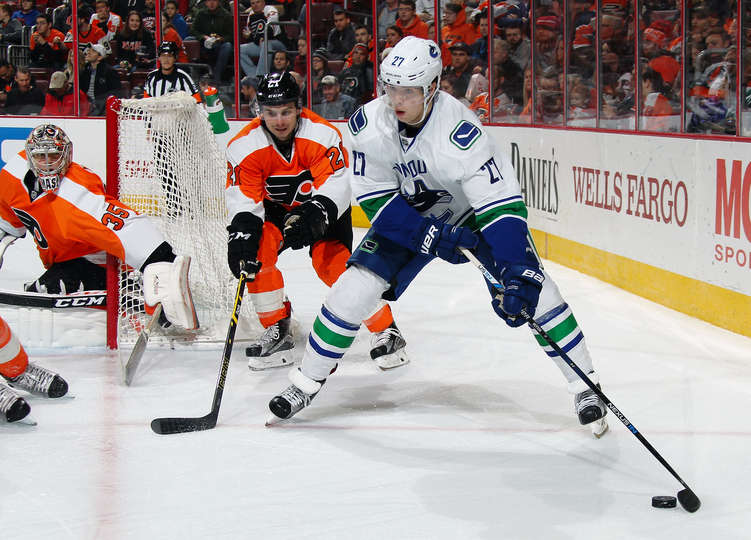 As the Canucks plummet down the standings, the voices of those advocating for a tank job are becoming louder and louder. Unless things change quickly, a bottom-five finish in the NHL is not inconceivable.

Since the summer, I’ve always advocated for the team to fully commit to going young. That means giving the youngsters meaningful minutes, and living with the results – good or bad. I believe that this fanbase is mature enough and intelligent enough to endure two or three dry years if it means the Canucks become a highly-competitive team again.

Jared McCann, Ben Hutton, Bo Horvat, Jake Virtanen, and Sven Baertschi (the latter two rotating for each other) are all playing regular minutes for the team (partly out of necessity due to injuries). So I’m getting my wish of seeing the youngsters play.

The problem is that they’ve all hit a wall. And the Canucks are losing. In a perfect world, this team would be winning AND the young players would be large contributors to that. But right now, neither is happening. And I can’t help but wonder if the losing is stunting – and not helping – their development.

The Canucks made a bunch of changes to their forward lines before the Philadelphia game and will have to do even more juggling to replace Henrik Sedin at centre. Ryan Miller will start in net.

Zetterberg told @HockeyAbbs he though Hank Sedin will play tonight. Still no word from #Canucks on call up but Vey I'm guessing.

*Update: Linden Vey will draw in for Henrik Sedin

No Hank Sedin for #Canucks tonight. Vey will play but don't ask me about lines because I have no clue!

On paper, the Canucks certainly aren’t deep enough or talented enough to match up with the Detroit Red Wings. While I have a sneaky feeling that the Canucks are going to put in a spirited effort as they battle through the adversity, I don’t think it will be enough to earn the win.

Canucks lose 3-2 to remind winless on the road trip.