The Vancouver Canucks will play the Oilers in Edmonton in their penultimate preseason game. This is the first of back-to-back games against the Oilers, with the next meeting in Vancouver this Saturday night.

This is their first meeting in the preseason; these two teams haven’t played each other since the Young Stars Classic last month.  And everyone remembers what happened in that game…

The Canucks come in with a 2-3-1 preseason record while the Oilers are a perfect 6-0.

Heading into the game, there are some familiar questions surrounding the team. Namely, who is going to make the team and where is all the scoring?

Jared McCann certainly helped his campaign to make the opening night roster with another strong performance against the Sharks on Tuesday night. McCann scored the club’s only goal and was the most noticeable Canucks player on the ice.

“He’s done everything from his perspective that he can do to make this team” – Benning on McCann, who will play final two exhibition games.

A fourth line with McCann between Derek Dorsett and Brandon Prust seems more promising than that same line with Vey in the middle. Vey has gone unnoticed in the preseason while McCann has arguably been the Canucks’ most dynamic player. Barring two horrible showings by the rookie, expect to see McCann on the opening night roster on October 7. 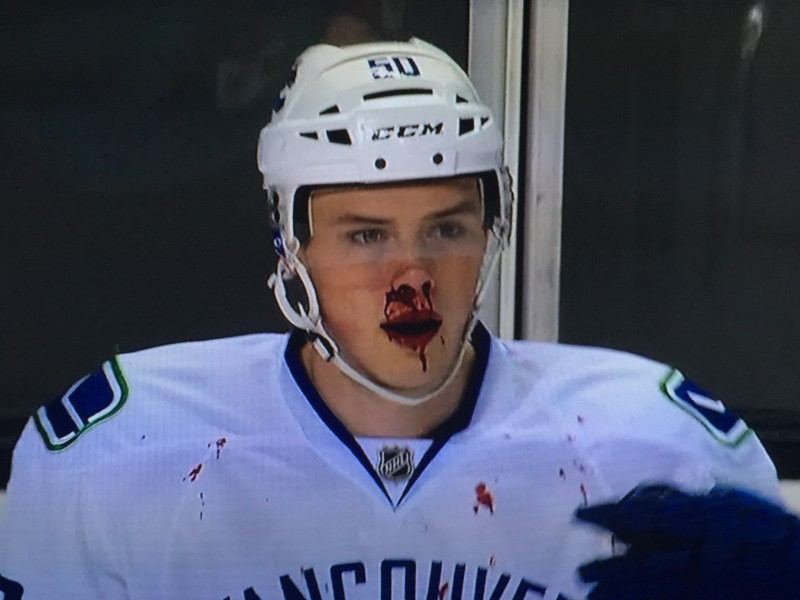 Another interesting roster battle is that for the left wing position on the third line that went up for grabs when Chris Higgins went down with an injury.

Brendan Gaunce has outplayed both Jake Virtanen and Ronalds Kenins so far this preseason, and he could be poised to finally crack the Canucks lineup.

As I watched Tuesday night’s game, I was impressed by Gaunce’s grit and guts. While killing a first period penalty, Gaunce took the puck right off of his nose from a clearing attempt from Ben Hutton. Gaunce didn’t even look at the bench or make a move in that direction. Instead, he played a whole 50 seconds AFTER getting hit, leaving a trail of blood wherever he skated.

A Gaunce-Horvat-Hansen third line has some potential both offensively and defensively.  We’ll see what happens over the next two games. 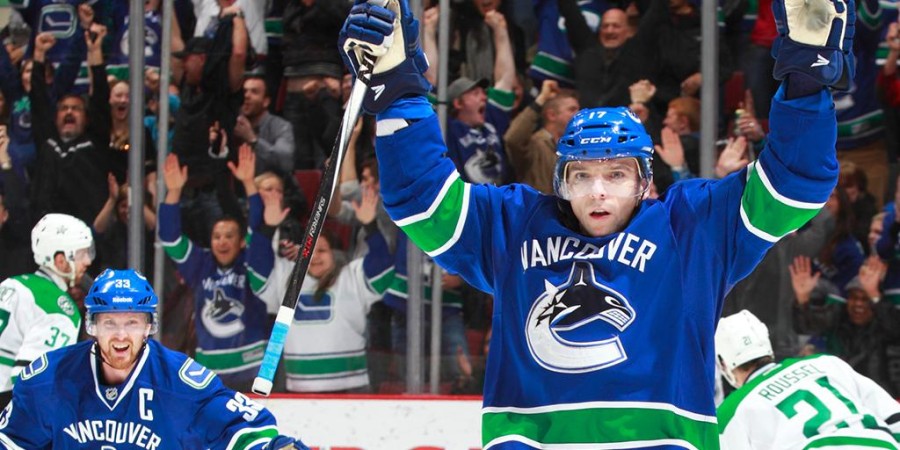 With only two more preseason games to go, the Canucks coaching staff will want to try to set some lines and stick to them. The Sedins have played with multiple players throughout the exhibition schedule and so far nothing has really clicked. It was likely Burrows’ spot all along but it would have been nice to see more offensive production from the twins.

Ditto for Brandon Sutter, Sven Baertschi, and Radim Vrbata. Penciled in as the second line to start the season, these players haven’t done much individually or collectively. Granted, two of the players are essentially newcomers to the team, so the chemistry will take some time.

Bottom line: the Canucks needs to feel good about themselves heading into the regular season next week. Developing some chemistry and creating scoring chances would certainly help.

Youngsters Jared McCann, Jake Virtanen and Ben Hutton will get in the lineup once again tonight, as will incumbents Linden Vey and Ronalds Kenins. Brendan Gaunce and Frank Corrado have the night off.

We won’t know the line combinations until warm-up, but here are the players that will be making the trek to Edmonton (and my best guess at potential lines).

I took a bit of heat for (correctly) predicting a Canucks loss on Tuesday night. Some questioned my loyalty while others wondered if I’m still feeling the effects from a concussion I suffered in July.

Regardless, I think the Canucks might be in tough against a likely-motivated Oilers team playing in front of their home crowd. However, they know that the time is now to start feeling good about their game. Let’s go with Vancouver 3-2.