After a thrilling 3-2 overtime win against the number one team in the NHL on Thursday, the Canucks are riding high on their way into Edmonton, to take on the Oilers.

The are currently tied for second in the conference and are sixth in goals per game in the NHL. They are scoring goals and they’re fun to watch again.

The Edmonton Oilers are playing much better hockey than they were the last time these two teams met. The perennial basement dwellers from northern Alberta have won 4 of their last 5 games and haven’t been the butt of quite as many jokes of late.

The Canucks will try to rekindle those jokes and maybe even get an Oilers jersey or two thrown onto the ice at Rexall Place. 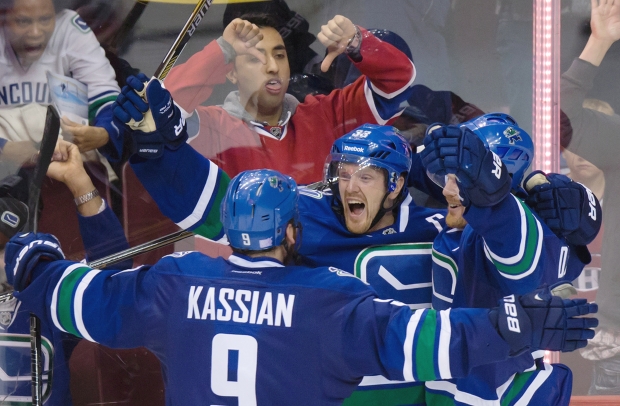 After a nightmare of a season in which Henrik and Daniel Sedin put up 50 and 47 points respectively, you could be forgiven if you wondered if the Sedins were still elite players in the NHL. One month into the season and the two highest scorers in franchise history are proving they’ve still got it. The twins have 12 points each in 10 games, despite the fact that head coach Willie Desjardins is rolling four lines, diminishing their even strength ice time this season.

The Canucks looked like they were going to fumble and bumble Thursday night’s game away until Henrik and Daniel took charge for a beautiful overtime goal.

The overtime winner was impressive for a few reasons. Henrik starts the play by checking Tomas Plekanec in the corner, then gets by him with a nifty behind the back bank off the boards to himself. Henrik pushed the play, showing urgency and drew three Habs players to himself before beautifully dishing the puck to his brother Daniel who was blowing down the wing with speed. Daniel received the pass and took the puck to the net with purpose and decisively putting the puck upstairs on Carey Price.

How’d the Canucks win it in OT over the Habs? Because they all forgot Henrik wasn’t the only guy on the ice. pic.twitter.com/XjzBZR2mpk

Night-in, night-out, the Sedins have looked dangerous this season and that is great news for Canucks fans.

Alex Burrows was given a three-game suspension by the NHL on Friday for his hit on Alexei Emelin. Based on precedent, I thought the suspension was a little bit harsh, but nevertheless the Canucks will need to adjust. Jannik Hansen will be getting the promotion to fill Burrows’ spot on the second line, not Zack Kassian as many would have thought.

The decision to not give the spot to Kassian makes me raise an eyebrow, as Kassian had been playing ahead of Hansen in the lineup until now. While I’m hardly a huge Zack Kassian fan and can find his indifferent play infuriating, at some point the Canucks need to make a commitment to develop him as an offensive player. They ought to try giving him some offensively gifted players to play with or at least give him some power play time.

A big reason for the Canucks’ 7-3-0 record this year is the play of their special teams. The Canucks are ranked 7th and 5th on the power play and penalty kill, respectively. Their power play has been bolstered by deploying Linden Vey as a rover, with the power play specialist getting all three of his goals with the man advantage. Their PK has been a real team effort, with 15 skaters averaging more than 40 seconds/game while shorthanded.

Ryan Stanton is skating, but isn’t ready to return to the lineup yet. Bo Horvat will be recalled from the AHL on Sunday. Tom Sestito will get to play his first game of the season.

Update: Ryan Miller will get the start in goal.

This has all of the makings of a trap game. The Canucks have already beaten the Oilers twice this season and are coming off an emotional overtime win against the Habs. That doesn’t change the fact that the Oilers are still a terrible hockey team and the Sedins are red hot. The Canucks will take the Oilers lightly, but hold on for a 3-2 win.

Bonus prediction: someone on CBC will piss off Canucks Nation with some unfair disparaging remarks about Alex Burrows.