The road weary Vancouver Canucks find themselves in the centre of the hockey universe with a prime time date against the Toronto Maple Leafs tonight.

The Canucks lost to the Ottawa Senators 3-2 on Thursday, in a game where they were the better team. In what is becoming a bad habit, the Canucks carried the play, but just simply could not bury the puck past Andrew Hammond when the grade A chances presented themselves.

This is a different Maple Leafs team than in we’ve seen in the past. This edition of the Leafs are stacked with All-Stars. Only problem is that all of the All-Stars are in management and behind the bench.

No matter how bad the Leafs are, it is always special to play in Toronto on a Saturday night.

The Leafs are on a bit of a roll of late though having won 2 straight. Under new head coach, Mike Babcock, the Toronto sits at the bottom of the Atlantic Division standings with a 4-8-4 record.

It also appears that Babcock has decided on a starting goaltender. James Reimer will start his 6th straight game in net tonight.

The Leafs lack the fire power they once had, but do have some interesting players to watch. West Vancouver native, Morgan Rielly, tops that list. Rielly is a slick skating, precision passing defenceman who leads the Leafs in points after 16 games with 3 goals and 8 assists.

The Canucks power play is currently ranked 24th overall in the NHL, clicking at a dismal 14.8%. Bluntly speaking, the power play has looked lethargic and stale.

In the Sedin era, this has been a recurring problem that is often solved by Henrik and Daniel going on a tear with man advantage. Look for Radim Vrbata to get things going and that power play percentage to improve.

If there is one thing most have learned watching the Sedins over their career, it is that they tend to produce just when patience has been stretched.

Ben Hutton made his NHL debut in his near-hometown on Thursday night. The Prescott, Ontario (an hour away by car from Ottawa) native had over 100 friends and family at the game to take it all in against the Senators. Hutton, again, was solid and logged over 17 minutes of ice time.

Hutton continues to impress. The rookie leads all Canucks defencemen in points with 8 assists and seems to have Tanev-like cool in his own end. It simply is amazing how quickly Hutton has moved up Canucks defensive depth chart. 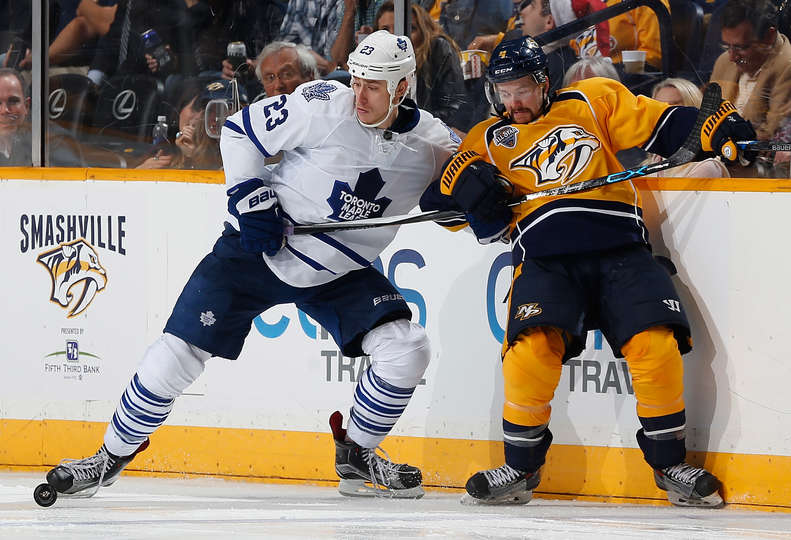 There wasn’t much of an uproar when Trevor Linden and Jim Benning decided not to re-sign UFA centre Shawn Matthias during the offseason. I mean, there is always a “where are the goals going to come from?” crowd, but most astute fans thought Matthias’ 18 goals last season were an aberration. Matthias has underwhelmed in Toronto and is currently on pace for 5 goals.

The much loved Frankie Corrado has been a complete waste of a waiver wire claim for the Leafs. Corrado has yet to play one game in a Leafs jersey and will, no doubt, be on the waiver wire again.

Alex Biega was sent back to the Utica Comets and Brandon Sutter is banged up.

*Update: Hunter Shinkaruk has been recalled. It’s unsure yet if he’ll play tonight, but he’s in Toronto.

Here’s how the Canucks lined-up at practice:

The Canucks have looked very good and equally disjointed during this long Eastern Conference swing. In particular, special teams have really hurt the Canucks. What’s the cure for the special teams’ blues? The Toronto Maple Leafs! Look for the Canucks to breakout in Toronto and blaze to a 5-1 win.

And for Henrik Sedin to score 2 goals: