It’s feast or famine for the Canucks! After having six days between games, the Canucks play their second game in as many days with the Tampa Bay Lightning in town.

It should be a treat to watch the Lightning, they are what the Canucks should strive to be – a young, fast team that plays an entertaining style of hockey.

After starting the season 3-0 versus the Alberta teams, the Canucks face their stiffest test so far in this young season with the Lightning making their only visit to Rogers Arena this season. Widely regarded as one of the favourites to win the East, the Tampa Bay Lightning come into town with a 2-1-1 record. After tonight’s game the Canucks head out on the road for a three-game trip, so hopefully they can keep their perfect record intact.

Tweet during every Canucks game this season for a chance to win a $10 gift card Courtesy of The Charles Bar. The ‘Tweet of the Game’ is announced in our post-game SixPack. Use the hashtag #VCBCanucks to help get your Tweet noticed (you don’t need to use the hashtag to win, but it certainly helps improve your chances). Read last night’s SixPack here. 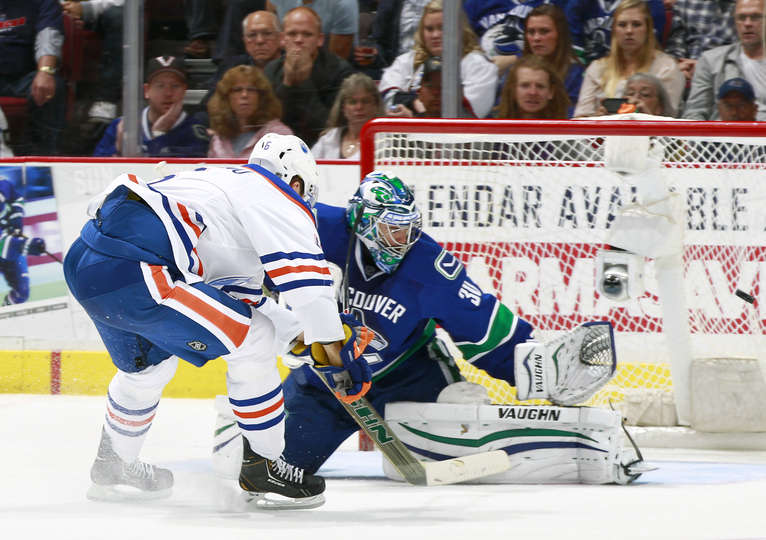 1. Having two good goalies is a good thing

Eddie Lack will take the net again after Ryan Miller shutout the lowly Edmonton Oilers. Some people may have been looking for another goalie controversy this season, but there isn’t one here. It’s a good thing to have two goalies battling for that one net. Good goaltending can cover for defensive gaps throughout the season, while great goaltending can steal games.

With another back-to-back next week, I expect Lack to get another start. Hopefully Miller can continue to get comfortable and the Canucks can start getting great goaltending from their newly formed tandem.

2. Jason Garrison, we hardly knew ya!

Jason Garrison makes his return to Vancouver after being traded this summer to Tampa Bay. As soon as Trevor Linden and Jim Benning took over the team, it was clear that Garrison was unwanted, as they likely viewed his salary as burden on the cap structure. Garrison used his no-trade clause to initially reject a trade to St Louis, before finally accepting a trade to Tampa.

Although he put up 33 points last season, Garrison never seemed to fit here in Vancouver. It has only been a few games, but Garrison is fitting in nicely with the Lightning, playing on the 2nd pairing with advanced stat darling Anton Stralman. Widely regarded for his booming slap shot, Garrison has not seen any regular power-play time with the Bolts (averaging just 0:15 on the power play so far), but as the year goes on I expect that to change.

3. Steven Stamkos makes his only visit to Vancouver

One downside of the Canucks playing in the Western Conference is that stars like Sidney Crosby, Alexander Ovechkin and Steven Stamkos only come to Vancouver once a year. Stamkos is the best pure goal scorer in the league right now and is already off to a great start after putting up a hat trick versus Montreal last week:

What impresses me most is that Stamkos had a horrific injury last year that resulted in him missing most of the second half of the season and the Sochi Olympics, but he looks like he hasn’t missed a step. Stamkos reminds me of Pavel Bure, in the sense that every time he has the puck, there is good chance that something exciting is going to happen. For the Canucks’ sake, let’s hope that doesn’t happen too much tonight.

Tampa Bay doesn’t employ a enforcer, so Tom Sestito will likely get to enjoy Rogers Arena’s finest popcorn in the press box again. Bo Horvat is inching closer to a return but is still a probably a week away from making his NHL debut. Ryan Stanton was injured on Friday night, so expect Yannick Weber to make his season debut on defence. Eddie Lack gets the start in goal.

Update: Frank Corrado has been recalled from Utica.