The Canucks will play the latest edition of the “most important game of the season” as they are in LA to face their boogeyman for a Saturday afternoon game.

#Canucks game at 1PM on a rainy Saturday pic.twitter.com/uO52DzLRob

It’s no secret that the Canucks don’t match-up well against the Kings. They have had the Canucks number for a while now and Vancouver will need to find a way to compete with LA or it might be a long offseason for the boys in blue and green.

Vancouver is 0-3 against Los Angeles this season, losing by a combined score of 12-3 and have been outshot 96-54.

The Kings are the most likely first round playoff matchup for the Canucks. Despite their place in the standings, the Kings look like Cup favourites every time they play Vancouver. 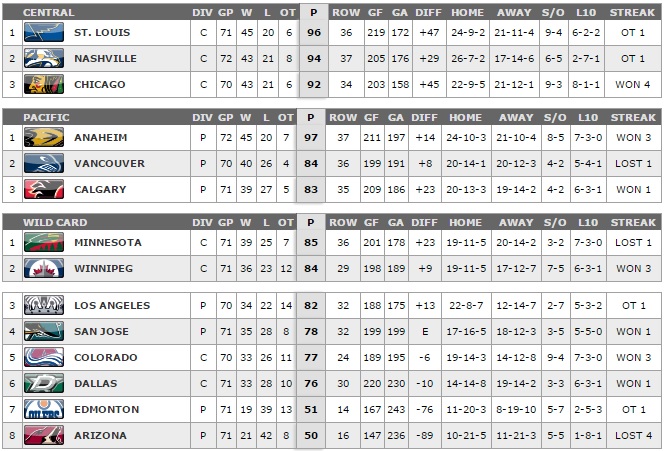 That’s why it’s mind boggling that the Canucks are still ahead of the Kings in the standings. If the Kings are indeed just bored of the NHL regular season and just waiting for the right time to turn it on, they are certainly waiting until the last possible moment.

I just hope the Kings get bored of beating the Canucks.

It’s not always about the goalies in Vancouver, it just feels that way.

After allowing 5 goals to the lowly Columbus Blue Jackets, fans will point the finger at their goalie. Eddie Lack wasn’t at his best and probably should have made a save on the first Columbus goal (despite the deflection), but to dwell on his performance right now would be the wrong thing to do given how well he has played this season.

The real story on Thursday night was the lackluster play from the team in front of him. The Canucks were slow to pucks and not nearly aggressive enough for most of Thursday night. They started-off the game well, peppering Sergei Bobrovsky with 20 shots on goal in the first period. But once they got up 2-0 in the second period, the Canucks got casual, cocky and lazy and the Blue Jackets made them pay.

Vancouver is in a good spot to make the playoffs, but pissing away points against the likes of Buffalo, Arizona and Columbus has eroded their cushion.

I don’t doubt the Canucks’ focus for the Kings, but securing 2 points against the Coyotes on Sunday will also be of supreme importance.

While the term “moral victory” is now a punchline in this city after how the Canucks played following the greatest 1-0 loss in team history last year, this will indeed be an important game for team morale. The Kings certainly must be in the Canucks’ heads by now and winning in Los Angeles would do a lot for Vancouver going forward.

If the Canucks end up playing the Kings in the first round of the playoffs (assuming both teams qualify for the postseason at all), they will need to believe in themselves. They will need hope.

Beating the Kings on Saturday would do wonders for that.

The Canucks are 2-for-27 with the man advantage in their last 11 games. Vancouver’s power play now ranks 21st in the NHL, which begs the question: why? Why is the Canucks’ power play so inept?

Tactically, the Canucks are predictable. The Sedins play catch on the right side of the ice, while Radim Vrbata looks to sneak-in for the cross-ice one-timer. Meanwhile, Alex Burrows (or whoever the net front presence on the day) plants himself in front of the net as a classic net-front presence.

And that brings us to the fifth member of the first-unit: Alex Edler.

Edler has had a terrific season in every area, except on the power play. Despite being glued to the first unit all season, he has just 7 points with the man advantage. It’s the lowest power play production he has had since his 22-game rookie season.

Edler, who has a powerful slap shot, needs to shoot more from the point to give the Canucks a legitimate threat to score from the outside. If opponents respect the point shot, it stretches the defence and will give the Sedins more room to work down low.

The Canucks will be without Brad Richardson and Zack Kassian, who are both injured and did not board the flight to Los Angeles on Friday.

Kassian and Richardson are not traveling, Burrows and Dorsett are. Lack and Markstrom will split games, Eddie vs. LA. #Canucks

Lack played Thursday’s game with a case of the flu, but hopefully he regains his health in time for the Kings.

The Kings haven’t played since Wednesday, so they are well rested and will be ready to play. That’s a bad combination and all signs point to a Los Angeles victory and that’s exactly why I’m going to pick a Canucks victory.

Vancouver has been somewhat unpredictable of late, so this is the perfect time for them to surprise us. Canucks beat their boogeyman 1-0, Eddie Lack plays all-world and Lack Nation screams “I told you so” from the top of their lungs.