The Canucks will get an opportunity to break an ugly trend tonight against the seriously woeful Carolina Hurricanes.

A 6-3 loss to Dallas last Tuesday preceded a solid 4-1 win against the Blues, and in similar fashion the 7-3 drubbing at the hands of the Avalanche was followed up by a 4-2 win against the Washington Capitals. Are you noticing a pattern? If there is any team against whom the Canucks should be able to buck the trend, it has to be the Hurricanes, right? Right?!

The Eastern Conference has been the gift that keeps on giving. After dispatching the Capitals on Sunday evening, another Metropolitan division team will make their way through downtown Vancouver. The Hurricanes aren’t just bad, they’re awful. In fact, they’re the only NHL team without a win this season. Every other team has at least two. They are well on their way to securing one of the top spots in the Connor McDavid/Jack Eichel sweepstakes.

Fortunately/unfortunately for Carolina (#TankNation), the Hurricanes will get their captain back in the lineup:

Apparently Eric Staal says he will play Tuesday in Vancouver. So #Canucks fans, you will actually know one member of the Hurricanes. #NHL

Will the Canucks be able to beat an opponent that would be hard-pressed against their AHL affiliate Utica Comets and the otherworldly Jakob Markstrom? Well, you’ll just have to wait and see like everyone else. 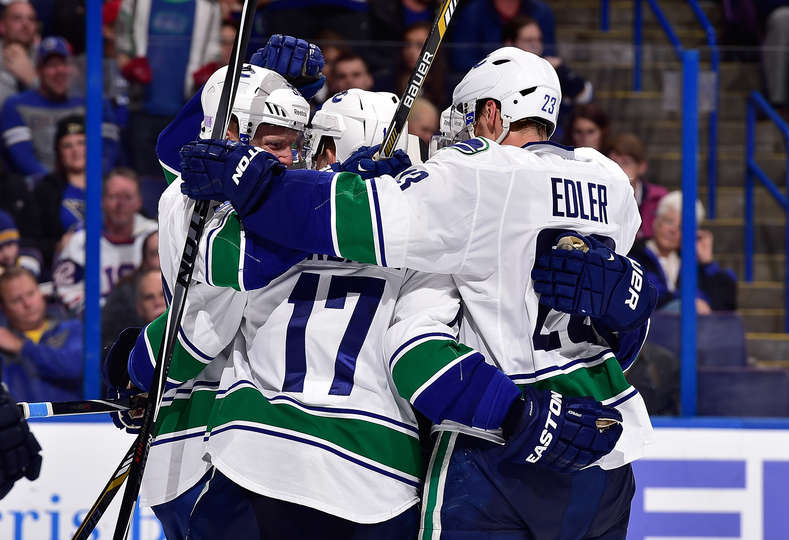 Quick, take a peek at the goals per game (G/GP) stat around the NHL. The Canucks are currently 5th in the league through 8 games with 3.25 G/GP. Remember last year? The Canucks couldn’t throw the puck into the net! Many predicted it would be the Sedins that would provide the vast majority of offense this season. On paper, especially with last year’s power outage fresh in fans’ minds, that may have been a relatively decent observation. However, it looks like there may be some secondary scoring in Vancouver. After the first line (Sedins and Vrbata), a second line comprised of Nick Bonino (7 points), Chris Higgins (6), and Alex Burrows (5) has been a pleasant surprise. Unfortunately, the Canucks have been a mess defensively at times. Allowing 3.25 goals per game is obviously not a recipe for success. Hopefully getting Ryan Stanton and maybe even Frank Corrado back soon will shore up things.

Nonetheless, there are a few encouraging statistics. Last year the Canucks team shooting percentage was 7.56% (29th in the NHL). So far this year? 9.63% (still only 14th). While that number will likely regress towards the league average (8.9% last year) over time, the opposite can be said for their save percentage. Right now, the Canucks team save percentage is .885%. That’s bad, but will likely improve. What do all these numbers mean? If the Canucks can improve their defensive systems (definitely possible), get better goaltending (again, how can it be worse), and regress only slightly regarding shooting percentage, there is no reason not to expect success.

Hat tip to Sporting Charts for the shooting percentage statistics.

As noted, the Canucks have not been good in their own end. Regrettably, it’s not just the numbers that look subpar either. Sure, they are sitting 23rd in goals against per game, but anybody who has watched a game this season has seen, at one point or another, the team break down in the defensive zone. While the goaltending hasn’t been very good, it’s the sequences leading up to the opposition potting one that are a little suspect. Bad clearing attempts, missed assignments, and general confusion have led to momentum killing goals, bad penalties, and increased pressure on the goalie. Hopefully, as the team adjusts to the Willie Desjardins and Doug Lidster style of play, one that differs wildly from John Tortorella and Mike Sullivan, the team can tighten up in front of Lack and Miller.

While the previous storyline lauds the Canucks impressive offensive numbers, they have received very little support from their back end. Alex Edler and Luca Sbisa are the only Canuck defensemen to record a goal. Right now, it’s not a huge concern, seeing as the powerplay doesn’t necessarily operate off of a big point shot like other teams and the rest of the forward corps is picking up any perceived slack 5-on-5. However, if that production dries up, the first shots of criticism may be thrown at the Vancouver defencemen.

No, not the incredible John Travolta and Nicolas Cage classic from 1997 (read the IMDB blurb, it’s hilariously ridiculous/ridiculously hilarious).

The Canucks have been awful in the dot. They currently sit in 29th in the league in that category, and while they managed to win one more faceoff than Washington two nights ago (the first time this season they won that category), it’s still an area that desperately needs improvement. The Canucks are currently 45.8% on the face-off (which is obviously bad), but it’s the fact that only one player is a positive face-off man. That would be the first line centre Henrik Sedin at just 51.2%. Something needs to change. That much is clear.

You can’t help but wonder what would happen if the Canucks started the play with the puck a little more. They’re currently second in shots per game, so at least they’re getting the puck after losing the draw.

#Canucks 29th in face-offs and 2nd in shots on goal. So lots of chasing to get pucks, but once they have it…look out.

Willie Desjardins said on Monday that Ryan Stanton was getting close to a return, but as for right now, the same lineup that beat the Capitals will likely take on the Carolina Hurricanes this evening.

Before I give my prediction, I should mention there are three players (Patrick Brown, Viktor Rask, and Brody Sutter) currently listed on the Hurricanes roster that are seeking their first NHL goal respectively. The Canucks continued their trend of giving up “NHL firsts” last game against the Caps allowing Liam O’Brien’s first pro tally. Still, I’m confident that the Canucks can spot the Canes 3 goals and still win the game, helping Carolina continue to fulfill their season long campaign for Connor McDavid and subsequently keeping pace with some of the Pacific Division leaders like Los Angeles (duh), Anaheim (duh), and Calgary (wait, what).

Oh, and if you thought playing blindfolded dodgeball was a weird way to start the season, check out what Perry Pearn has the Canucks doing now!