The NHL playoffs are a strange animal. A deep playoff run can make an elite player become legend and an average player a household name.

No doubt, the Vancouver Canucks have very little chance to win their round 1 Stanley Playoff matchup against the Calgary Flames without significant contribution from Daniel and Henrik Sedin, Radim Vrbata, Alex Edler, and Eddie Lack. Likewise, the Flames are not likely to find any success without Jiri Hudler, Johnny Gaudreau, Sean Monahan, TJ Brodie, and Jonas Hiller leading the charge.

But for today, let’s look at those players on the Canucks and Flames who may not be on everyone’s radar, but may impact the series greatly. 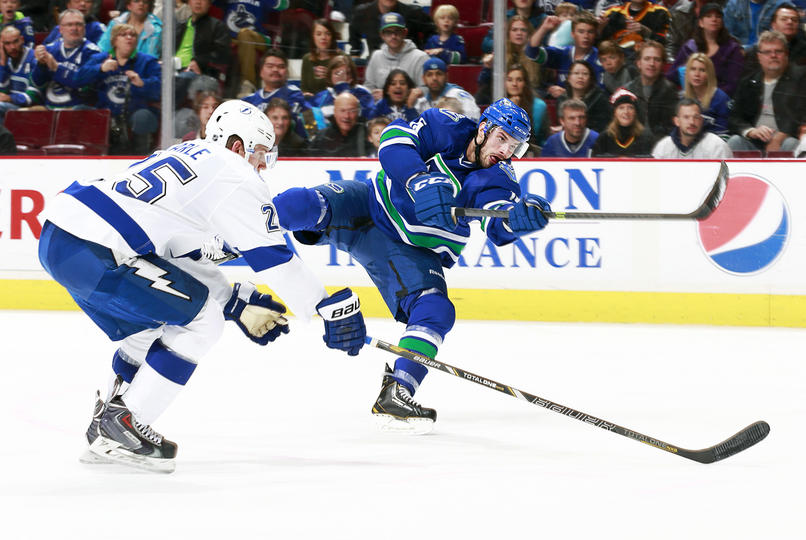 Brad Richardson has been sidelined with an ankle injury for most of the 2nd half of the season, but it appears that Richardson will make a return to the Canucks lineup in the Round 1 series against the Flames.

Richardson said he felt good today and is aiming to play Wednesday, but wants to see how he feels Tuesday before confirming.

This is bad news for the Flames. Richardson would likely replace Linden Vey in the lineup on the Canucks 3rd-4th line and improves the Canucks significantly. Not only is Richardson superior to Vey defensively and in the faceoff circle, but he was having a fairly productive season offensively prior to his injury. In 45 games, Richardson scored 8 goals and 13 assists with a blistering shooting percentage of 12.28%.

Luca Sbisa is the butt of many jokes in Vancouver, but he could prove to be a difference maker against the Flames. Sbisa’s decision making with the puck in his own end has been questioned repeatedly, but his ability to make big hits has not.

The Flames are not blessed with a big group of forwards and Sbisa’s physical play could really wear down the small, speedy Flames forwards as the series goes on. If, and I realize this is a big if, Sbisa can limit his turnovers in the defensive end and play physical, he will have a massive impact on the series.

There is little doubt that the Flames have identified Sbisa as one of the Canucks’ weaknesses they can exploit. If Sbisa rises to the challenge, the Canucks will win this series in quick fashion.

Port Coquitlam Buckaroo and Coquitlam Express alum David Jones simply screams as a player who could have a large role in the Flames-Canucks first round battle. Jones is a few years removed from back-to-back 20 goal seasons, but still has the ability to score in bunches.

Jones plays a somewhat abrasive and gritty style which is often effective in the playoffs. If Jones were to catch lightning in a bottle, the Flames would be a very tough out. They need secondary scoring and Jones is one of those players than can raise his game for short bursts.

David Schlemko is noted for being on the NHL waiver wire more than being a possible impact player, but the former Medicine Hat Tiger will likely be put in a position to make a difference against the Canucks.

Schlemko will get the odd shift on the Flames 2nd power play unit and will play important minutes on a somewhat thin Flames defence that is missing it’s best defenceman, Mark Giordano. The Flames need someone to step up big time on defence if they plan on making any noise in the playoffs. To Willie Desjardins’ chagrin, his old WHL player may just be that player to raise his game.