The Vancouver Canucks continue their preseason schedule tonight against the Calgary Flames, the team that kicked them out of the playoffs in startling fashion last spring. So tonight’s game might contain a little bit more emotion than a typical NHL preseason matchup.

The Canucks and Flames will play tonight and tomorrow in a home-and-home. Most players will only play in one of the games, considering the number of players yet to be cut. 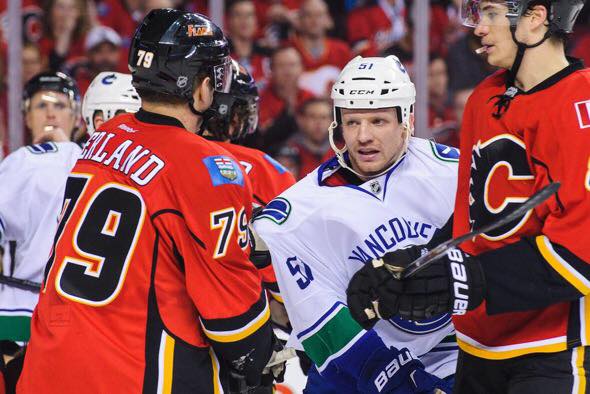 It won’t be easy to lay to rest the disappointing end to a surprisingly successful 2014-15 campaign from the Canucks. As the season progressed, expectations changed dramatically, enough so that a first round exit to the Flames was unexpected. The Canucks rarely looked in control and the weaknesses and headaches pundits predicted before the season would hamper the Canucks throughout the regular season reared their ugly heads. Six games later and the Flames had won the series.

However, preseason games are not simply for those NHL regulars from the year before. Players that were not involved in that series last year and the younger prospects looking to make an impact will add another layer to the games being played tonight and tomorrow. Who will step up? Who can make their mark early? That’s what the preseason is all about. 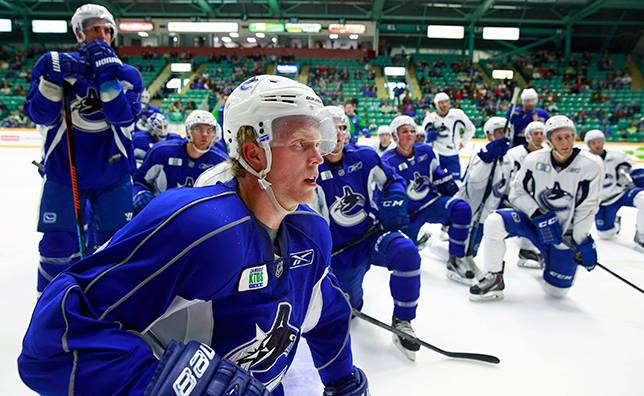 There were a couple surprises among those cut from the preseason roster several days ago, but none more so than Jordan Subban. After excelling in the Young Stars tournament and playing last year during the preseason, many thought Subban might be a late cut or possibly even push for a spot. Instead, he’ll join the Utica Comets for the upcoming season and have to play his way on to the NHL roster.

Other notable names released from the Vancouver preseason roster include Anton Cederholm, Dane Fox, and 2015 third round pick Guillaume Brisebois. Cederholm and Fox will join Subban in Utica, while Brisebois will return to the QMJHL and Acadie-Bathurst.

With Higgins in a walking boot this preseason just got a lot more interesting for guys like Virtanen and Gaunce. #Canucks

So, after a few cuts and one significant injury, there are spots available for some of the younger players still with the team. With Higgins fracturing his foot in the Kraft Hockeyville Game on Monday, there are many out there that see 2012 first round draft pick Brendan Gaunce as the benefactor.

No word yet on the Canucks’ line combinations yet, but here are the players that will be headed on the plane to Calgary. The Canucks also placed goaltender Richard Bachman on waivers today, with the intention of sending him to Utica.

In what amounts to a meaningless game with regard to the upcoming season, this should still be an emotional contest. Hopefully there are some white sweaters intent on standing up to the rough and tumble Flames that pushed the Canucks around last year. I’ll take the Canucks in a close, hard-fought game. 4-3 for the visitors.