Fresh off a confidence building shootout win over the Anaheim Ducks, the Canucks take on the upstart Arizona Coyotes tonight at Rogers Arena.

The Arizona Coyotes surprisingly sit 2nd in the Pacific Division with 40 points, and are one of the few teams in the division that can say they are improved from last season.

Much of the early accolades went to young guns Max Domi and Anthony Duclair, but perm-Coyote Shane Doan has stolen the spotlight as of late. Doan set the franchise record for goals on Friday night, appropriately against the Winnipeg Jets. 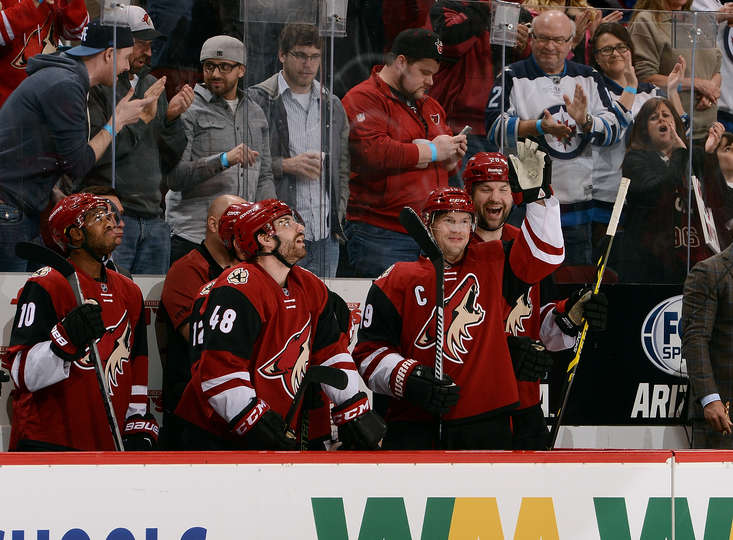 Mikkel Boedker leads the Coyotes with 12 goals and 18 assists and is easily on pace for a career best production-wise. Look for the Coyotes to play a more uptempo style than the Anaheim Ducks did on Saturday night.

The words written weren’t as horrible as the headline, but does it really matter? The headline is direct and harsh to a young Vancouver Canuck prospect who is trying to find his place in the NHL; I’ve never understood why Vancouver media and fans are so harsh on Canuck kids.

This isn’t an isolated attack.

You don’t have to look too hard at the Canucks line-up to identify two players that were frequently criticized harshly at a young age. I am, of course, referring to Daniel and Henrik Sedin. The chastising from media and fans alike of the Sedins was relentless and, from time to time, the negative sentiment still pours out of the most ignorant of Canucks fans.

I’m not suggesting that Jake Virtanen will make those who are criticizing him now look like absolute fools in the manner the Sedins have, but I do question why young players are heaped with excessive criticism and over-the-top praise, for that matter.

"It's not all rainbows and butterflies, you win and lose. But people blaming Jake is crazy. It's a team game" – Burrows, on Team Canada Jrs.

2.  Tradewinds blowing throughout the league

A statement from Jonathan Drouin's agent Allan Walsh regarding his client's future in TB: pic.twitter.com/Vhwet1IpTW

Jimmy Hasscup of USA Today wrote of six teams that should trade for Lightning’s Jonathan Drouin and, you guessed it, the Vancouver Canucks were one of them. This is coming off the heels of a Vancouver media frenzy regarding the prospect of Columbus Blue Jackets’ stud centre Ryan Johansen being potentially acquired by the Canucks.

Going after Drouin should make a lot more sense to Jim Benning than trading for Johansen. Drouin is younger, cheaper, still on his entry level contract, plays a position of need for the Canucks, and has a higher upside than Johansen. The Canucks would have to give up something significant in return, but Drouin would be worth it. Benning has already shown that he covets a young, scoring winger when he traded for Sven Baertschi. Players like Drouin, young with pedigree, simply do not come on the trade market often. Dare to dream!

Sadly for the Canucks and Canucks fans, the most obvious trade scenario would be a Drouin-Johansen trade between Tampa Bay and Columbus.

The Canucks are sliding in the Pacific Division despite still holding on to 4th spot. They are in contention, but are on the edge of falling out in a hurry. The Canucks have managed to stay in the hunt simply because they have played more games than most of the teams in the division. Save for the Edmonton Oilers (who have played the same amount of games as the Canucks), every team has at least one game in hand on Vancouver.

It’s clear that the Pacific Division is dominated by the Los Angeles Kings with the remaining six teams muddled in mediocrity. The Anaheim Ducks are starting to get their act together and will likely move into a playoff spot by simply playing slightly above average. The rest of the division, to the contrary of pre-season predictions, is an absolute dog’s breakfast.

January will be sink or swim for the Vancouver Canucks, and odds are good that they’ll occupy one of the bottom two spots in the Pacific Division by month’s end.

Jared McCann draws back into the lineup tonight and Alex Grenier has been recalled. Brandon Prust left last game, but he was present at practice today. We’ll see if he plays.

The Canucks had an optional skate this morning, so we’ll have to wait until game time to get a look at the lines for tonight. Here’s what they looked like at yesterday’s practice (with Grenier in for Kenins):

The Canucks look to build on an emotional win over the Anaheim Ducks while the Coyotes look to create some distance between themselves and the rest of the division. The Canucks continue to deal with injuries to key players. Look for the Canucks to put up a good fight, but fall short. The Canucks lose this one 4-3 despite another stellar offensive night from the Sedins.