The Vancouver Canucks return to the friendly confines of Rogers Arena where they will receive an injection of the best possible medicine for an ailing squad: a healthy dose of the Eastern Conference.

Coming off an underwhelming effort in the Mile High City, Willie Desjardins will need his Canucks to quickly regroup as Vancouver will play host to a trio of Eastern-based teams.

The less that is said about Friday night the better. But since I have to say something about where the Canucks currently find themselves, I’ll just say Jarome Iginla from 2003 came back from the dead (It is Halloween season after all) to haunt Vancouver like he used to when Calgary wasn’t terrible. Let’s just leave it at that.

Most of the angst surrounding the Canucks is about the defence which has been rather porous lately. Can the Canucks overcome some rather glaring deficiencies in time to take on one of the most dynamic forwards in the NHL? Ryan Miller and Eddie Lack are hoping so.

After being shelled for seven goals against the Colorado Avalanche, how could the Canucks defence not be brought into question?

What was supposed to be a mobile unit has looked slow and completely out of touch at times this season, most notably against the Avalanche and the Dallas Stars.

So are we allowed to criticize Benning yet? Because liking the Sbisa pickup and liking the "mobile" Canucks D were things he said.

I’m not ready to start criticizing Jim Benning just yet because we’re only seven games into the season and, as it was pointed out to me yesterday by a few people, the Canucks were on the last half of a back-to-back situation. I think the idea was that a little perspective is in order as games like this will inevitably happen over the course of an 82 game season.

I do, however, think this Luca Sbisa thing is getting a bit ridiculous. For a market that is used to seeing Zack Kassian routinely benched for breathing the wrong way, it’s a little frustrating to watch Sbisa toss up pizza after pizza and still receive ice time. I would say that the Province’s Tony Gallagher expressed it the best in his latest column:

The thinking that went into the conclusion Luca Sbisa could in any way replace Garrison is clearly deluded and whomever thought those thoughts should schedule a lobotomy ASAP.

Then again, who else do the Vancouver Canucks have right now to fill his time if they don’t believe Frankie Corrado is good enough? Which actually brings up another question: Why is Frankie Corrado in Vancouver not playing when he could be in Utica contributing?

2. The Great 8 Returns to Vancouver 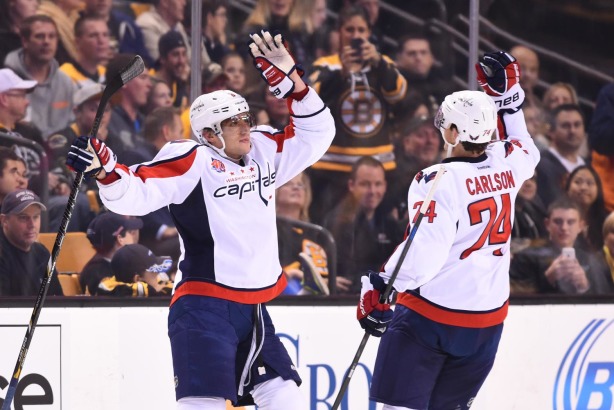 Alex Ovechkin is one of those players that, when complaining about how we never get to see the top stars of the NHL in Vancouver, is often cited as one of the prime examples. Although Ovechkin has somewhat fallen out of the conversation of best player in the NHL, he is still a dynamic talent and highly entertaining to watch. There will definitely be a few Ovechkin jerseys in the stands on Sunday night.

3. A Healthy Dose of the Eastern Conference

It’s a well-established fact that the Western Conference has dominated the East over the last couple of seasons. It’s not that the talent level in the Eastern Conference is bad, it’s just that the top teams in the West have been undergoing an arms race and loading their rosters with premium talent.

The Eastern Conference teams have been a perfect tonic for what ailed the Edmonton Oilers. After starting the season with five straight losses (one in overtime so they at least got a point in there), the Oilers have rebounded nicely with three straight victories thanks to visits from the Tampa Bay Lightning, Washington Capitals, and Carolina Hurricanes. If Edmonton can beat those teams, you know the Canucks have a good chance to rattle off a couple of wins in their upcoming games against the Capitals and Hurricanes. So with that in mind, it will be refreshing to have a couple underwhelming Eastern teams visit Rogers Arena.

Tom Sestito is still waiting for his first game of the season, as is call-up Frank Corrado. Ryan Miller will get the start in goal.

Update: no changes to the Canucks line-up at Sunday morning’s practice.

The Canucks are in dire need of a bounce back effort and I think they deliver for their hometown fans. Although I can see Ovechkin potting couple of power play goals, the Canucks will still manage to pull out a 5-3 victory.

Bonus Prediction: We will see at least 20 Ovechkin jerseys in the Vancouver crowd.