The Canucks play the penultimate game of their six-game road trip tonight against the Boston Bruins at TD Garden. The Canucks are 2-1-1 so far on this trip, good for five out of a possible eight points despite being outplayed in every game (more on that below).

Although both rosters have seen significant changes since the 2011 Stanley Cup Final, there are still enough familiar names to make this game intriguing for both sides: Sedin, Hansen, Burrows, Edler, Bergeron, Chara…and some guy named Marchand.

This is the seventh regular season meeting between the two clubs since the 2011 Finals –  hence the title of this post.

These two teams have met once this season: the Bruins easily defeated the Canucks 4-0 in Vancouver back in December. Boston has quietly put together an efficient season and sit in fourth place in the Atlantic Division with 53 points in 45 games.

Leading scorers for Boston are forwards Patrice Bergeron (41 points), Loui Eriksson (38), David Krejci (33), and Ryan Spooner (33). Injured centre David Krejci will be a game-time decision; he has been out since December 27 with an upper body injury.

They earned five points in those four games, mostly due to the stellar goaltending of both Ryan Miller and Jacob Markstrom. The two netminders have done everything in their power to keep the Canucks in games despite being outshot at almost a 2-to-1 clip. 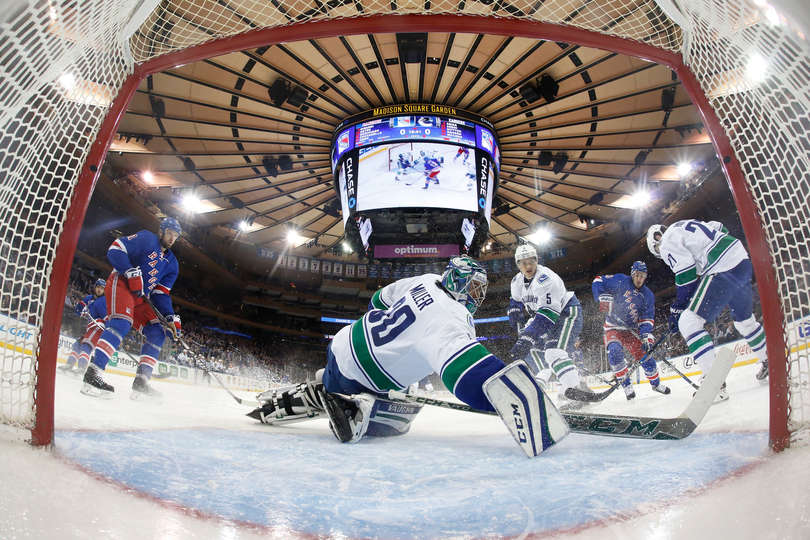 I’m waiting for one of them to throw their hands in the air or to grab a white towel from the trainer to hoist onto the end of the goal stick.

After two phenomenal games in which he stopped 93 of 97 shots, Ryan Miller could make way for Jacob Markstrom.

Willie D “We have two good goalies. It might be time to give Miller a breather.” #Canuckson1040

The Canucks had a mini soap opera on their hands earlier this week when word got out that Brandon Prust would likely be a scratch against the New York Rangers on Tuesday night. Reportedly, Prust was upset on Monday (when he found out) and blew off interview requests from the media.

Fast forward to Tuesday when the club did a complete 180: Prust would now be in the lineup to face his former team (albeit from three seasons ago). It seems like Prust’s tantrum was enough to convince head coach Willie Desjardins to change his mind about scratching Prust.

.@trevor_linden admits that dressing Brandon Prust today isn’t ideal, but it can be a “delicate dance” in the room https://t.co/Gh2XnqKaMk — TSN Radio Vancouver (@TSN1040) January 19, 2016

I wish I could tell you that Prust made a huge impact in the game, thus affirming Desjardins’ hunch to play him. Unfortunately, Prust made a minimal difference, registering two hits and no shots in just under 13 minutes of ice time.

Look for Jake Virtanen to draw into the lineup and for Prust to sit. Much to the relief of Brad Marchand and his nether regions.

On Wednesday, the Canucks announced that they had signed forward Mike Zalewski to a two-way deal for the 2015-16 season, replacing his AHL-only contract. The club then immediately recalled Zalewski from the AHL Utica Comets to join the team in Boston.

Vancouver signed Zalewski as a free agent in March 2014. He played in the final two games of the 2013-2014 regular season, picking up one assist. This year, Zalewski has tallied 17 points for the Utica Comets in 36 games.

Zalewski is only 23-years-old and gives the Canucks even more depth at the forward position. Given how quickly he was brought up to the main roster, there’s a good chance he will see the ice in Boston.

It looks as if Virtanen and Zalewski will indeed draw in, with Prust and Adam Cracknell sitting out.  The D-pairs remain the same, and Markstrom starts in goal.

This game is likely going to go one of two ways. Either the Bruins exert their offensive will over the Canucks and outshoot and outscore them, or the Canucks will rely on stellar goaltending to once again hang around until the end.

As much as I’d love to see the latter, I think we may get the former. Look for a 4-2 Bruins win.