Christmas has come early for hockey fans as the Boston Bruins are in Vancouver to renew their rivalry against the Canucks on Hockey Night in Canada. 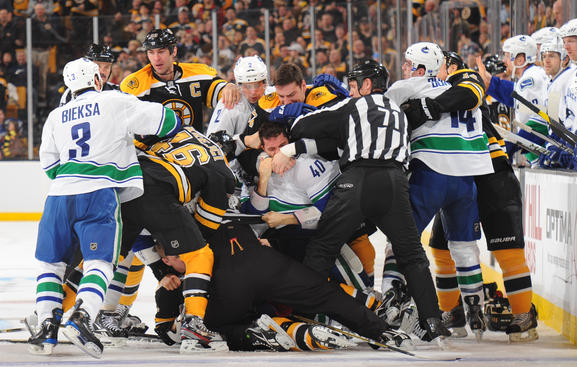 That picture pretty much sums up the relationship between Vancouver and Boston.

Even if the all the “elite” has been zapped out of the Bruins and Canucks, if you think that the hatred has evaporated over the past four years, read this latest piece on why Rob the Hockey Guy still hates the Bruins and then talk to me about this supposedly dead rivalry.

Although there are still a few holdovers from the team that destroyed the hopes and dreams of a generation of Canucks fans, these are not the same Big Bad Bruins.

Bruins-Canucks is gonna be like a reunion of two old high school rivals. One is bald and fat now, the other thrice divorced. Life is hard.

Patrice Bergeron, Tuukka Rask, Zdeno Chara and coach Claude Julien are still hanging around, but gone are the likes of Milan Lucic and Shawn Thornton who really pushed the rivalry with the Canucks to some deep and traumatic levels.

The Bruins are no longer an Eastern Conference powerhouse, having missed the playoffs last year and currently sitting at fifth in the Atlantic Division, but they still pack an offensive punch in the form of David Krejci, Bergeron and Loui Eriksson who is apparently back from the dead.

Also important to note: The Bruins have an 8-2-1 record on the road this season and you know they are going to be foaming at the mouth to grab another piece of glory at Rogers Arena.

It’s odd to hear the Head Coach of an NHL team declare the 28th game of the season as a must-win, but there is no doubt that Willie Desjardins is probably starting to feel a little heat with the Canucks currently taking a nose-dive down the standings.

I’m sure that Willie is taking a more pragmatic approach to his declaration in that Vancouver needs to pull themselves out of this funk soon or their goal of making the playoffs will be a distant memory.

However, I’m betting that the majority of Canucks fans in British Columbia are considering Saturday’s game against the Bruins as a must-win for a completely different reason.

No, I’m not talking about Boston’s Ben Affleck as Batman. But can you imagine Batman with a Boston accent? 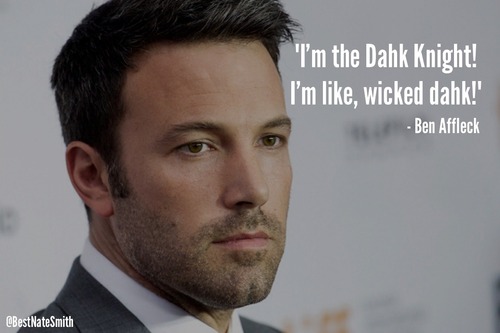 What was I talking about? Right! This guy:

@VanCanucks everyone do the Hutton dance!!! pic.twitter.com/BQ1MHU6U6S

It’s been well documented that one of the Canucks’ biggest issues this season (and there are many…) has been the complete garbage fire that is their defence. Among their many deficiencies, one of the most important has to be their inability to efficiently move the puck up to the forwards.

The Sedins and whoever is riding shot-gun will always be okay, although a little help is nice. But the rest of the crew?

The #Canucks have played 287.5 minutes since the last time a non-Sedin line scored a goal. How's that for secondary scoring

I’m not saying that Ben Hutton is going to suddenly cure the Canucks, especially in his first game back from injury. However, his ability initiate the counter-attack by getting the puck out of his zone and up to the forwards cannot be denied.

Unless Willie reigns him in. Which will probably happen. 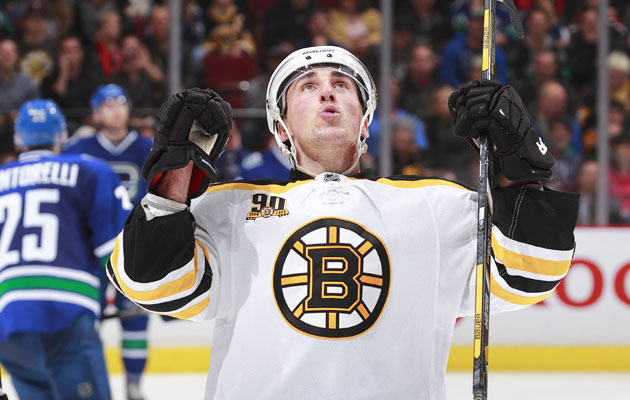 Yeah, Brad Marchand isn’t the most popular guy in Vancouver. I’m not going to get into the history because we all know that CBC is going to show Marchand speed-bagging Daniel Sedin about 30 times before the game even starts.

Instead, I will remind Canuck fans of what he did to Sami Salo a few years ago:

The worst part about this incident was Boston coach Claude Julien opening his mouth to once again claim the moral high ground as is the tradition in Boston:

“They have to protect themselves. Whether it’s the right way or the wrong way, … I’d rather have a guy take a two-minute penalty than turn his back to the play, stand up straight, and then get his face knocked into the glass and be out for maybe the rest of the year with a concussion, or maybe end his career like [Marc] Savard … In my opinion, if guys start protecting themselves the way Marchand did, maybe guys will stop taking runs at other guys.”

If you think this kind of crap was all in the past, it’s not. The Julien-Marchand Experience is still going strong in Boston.

Bringing back these memories is already getting me riled up. I’m hoping that fans attending the game on Saturday are able to locate their pulses, be loud, and give the Bruins a really hard time from the stands.

Make them remember how much they are disliked.

We won’t be sure about the lineup until closer to game time as the Canucks are working through some injuries.

*UPDATE: Jacob Markstrom will get the start in goal.

Markstrom: "It feels great to get the start tonight, especially against Boston. It's going to be a big game." pic.twitter.com/4BAW7ihZTd

I’m in a funny spot when it comes to my predictions. I have been very successful when I use my brain and pick the Canucks to lose.

When I’m feeling optimistic, it usually ends in disaster.

Are the Canucks built for sustained success? Absolutely not.

Can they muster up enough testicular fortitude to occasionally put together a solid performance? Of course. Even the Edmonton Oilers and Toronto Maple Leafs can bag an occasional win.

So, just because I can’t stomach the thought of Boston beating Vancouver, I’m saying the Canucks take this one 4-2 with Bo Horvat finally scoring an even-strength goal.