While everyone surrounding the Vancouver Canucks continues to scratch their heads with respect to the 6-3 loss suffered at the hands of the Dallas Stars, the calendar turns and a meeting with the St. Louis Blues is in store.

While it may have been an awful start to the game against Dallas, things turned around and the Canucks actually outscored the Stars 3-1 in the final 38:43 of the contest. Unfortunately for the Canucks, last time I checked, games are 60 minutes long in the NHL… Life goes on, and so does hockey, so another chance to show how the team stacks up against one of the Central Division powers should be seen as an opportunity.

Things didn’t start off very well on Tuesday night in the American Airlines Center. Ryan Miller looked shaky, there were defensive breakdowns galore, and it looked like the Canucks were attempting to expend a month’s worth of bad luck (bad everything) in the span of about 45 minutes on a weekday night in mid-October. As most people with even an inkling of hockey knowledge are aware, spotting the home team a 5-0 lead is not a recipe for success. However, in my opinion, there were more positives that stemmed from Tuesday evening than negatives (go ahead, call me crazy). I’ll do my best to convince you.

Ryan Miller also returns to St. Louis and the team that picked up the veteran goalie at the last trade deadline and promptly dive-bombed in the homestretch/first round due to injuries and remembering they were the Blues/are not supposed to win anything ever. However, it should be pointed out that Alex Pietrangelo is totally awesome. 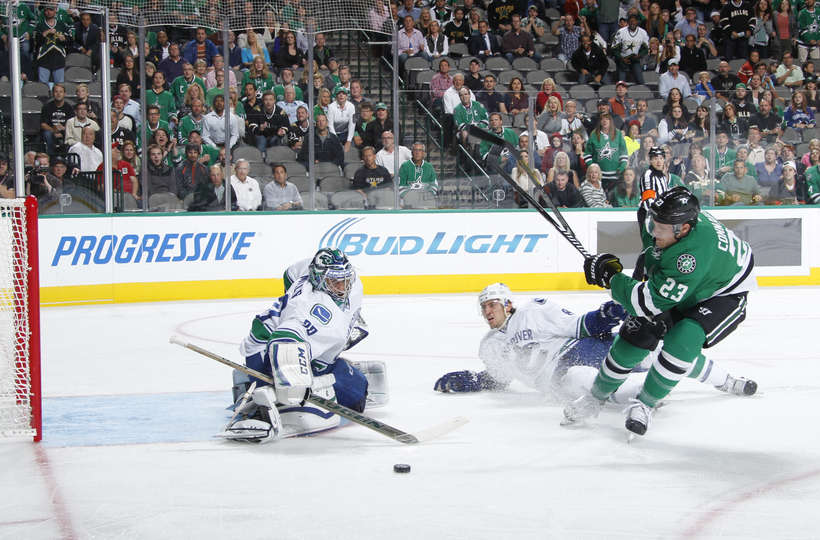 There were a lot of things missing in Rogers Arena last year. Consistent goaltending, levelheaded coaching, Alex Burrows, a decent offense, and… I could go on for a while here, but I won’t. One thing that stood out to me watching the final half of their loss on Tuesday night was another aspect that proved elusive last year: playing hard until the final whistle. You’d need several hands (and feet) to count the number of times the Canucks limped into a loss, or failed to close out a close game. Part of that was due to style of play Tortorella employed, but many suspected the fiery coach had “lost the room”.

Perhaps it is because it is early in the season and players still want to impress the new guy (Desjardins, Benning, Linden, or a combination of all three), but if you turned the scoreboard off and watched that game from the second intermission on, you’d say the Canucks played a helluva game. Sure, that’s pretty optimistic, but that’s the silver lining kind of thinking I bring to Vanity Buzz!

I tweeted it out towards the end of the game, but if analytics naysayers were looking for a little pick-me-up, they should have gone directly to the War On Ice game report, stood on top of a table or chair, and shouted, “SEE! I told you guys these stats are garbage and don’t predict anything!”

Hey, #fancystats naysayers. Be sure to check out tonight’s #Canucks – #Stars game. You’ll totally be right.

Seriously, though. Even if you look at shots on goal after the game, you would be forgiven for thinking something was amiss. The Canucks outshot Dallas 46-28. Oh, you think most of those were accumulated in garbage time while Dallas sat back and played their 4th line? Wrong. The Canucks outshot Dallas 12-10 in the first, and 18-9 in each of the second and third periods.

As for the advanced stats, only three players (Bonino, Burrows, and Higgins) registered a negative Corsi/Fenwick. Again, you could argue that the Stars knew the game was already won after the 5-0 lead and most of those shot attempt differential numbers unfolded in the latter half of the game, but even early on most of the Corsi and Fenwick numbers predicted a positive outcome for the Canucks. They lost the game 6-3 and somewhere, a traditionalist curmudgeon is smiling.

The fact of the matter is, the Stars had lights out shooting percentages and very good goaltending from Khari Lehtonen. PDO (shooting percentage + save percentage) usually regresses/progresses towards 100. The Stars PDO after the first 21:17? It was 138.5. That’s insane. More insane? It was still 1.15 at the end of the game. One 6-3 loss to the Dallas Stars does not a poor season make. Relax, Canucks fans.

Ryan Miller was bad on Tuesday night. Really, really bad. I have nothing to dissuade you from forming that opinion. Is that going to become the norm for Miller after signing a 3 year deal worth $18 million? I hardly think so. Vancouver has become so sensitive to goaltending over the past several years, but look around the league and you’ll see this can happen to anyone. Tuukka Rask got shelled and pulled in Montreal. Our old buddy Corey Schneider is averaging 3.13 goals against. Heck, even Henrik Lundqvist let in 6 goals in each of his first two games (I would know, he’s on my fantasy team). So, take a breath. Not every night is going to be like that.

As for tonight’s game. There was a lot of speculation as to who might start. Lack was superhuman against the Blues last year with a 3-0 record, one shutout. He only allowed 3 goals and posted a .960 SV%… that’s more like it! However, as Willie Desjardins pointed out in his post-practice media scrum yesterday, Miller has played long enough to “deserve” the benefit of the doubt. He’s returning to St. Louis and may want to make an impression on the team that cast him off after the unfortunate end to their season.

Bo Horvat started his first professional regular season game in Utica last night and felt good, but he’s still likely two weeks away from playing in the NHL. As for the Canucks, Stanton is still out and the Canucks will likely dress the same team that played in Dallas.

Update: Morning practice had Bieksa and Hamhuis back together again. The forward lines remained the same. Ryan Miller is likely to get the start in goal.

So, after playing well for parts of every game so far this season, everyone surrounding the Canucks is still looking for a legitimate 60 minute effort. The losses to Dallas and Tampa Bay have only added value to the argument that the Canucks cannot play against good to elite teams in the NHL. If we’re being honest right now, I feel bad for the Blues. The puck is going to drop tonight and they’re not going to know what hit them. Eager to get the bad taste out of their mouths and dreading a 3 game losing streak (that would put them back at .500), I think the Canucks take it to the Blues and win it by at least a couple goals.