After a less than inspiring effort against the pesky Dallas Stars on Saturday night, the Vancouver Canucks will attempt to move back into the win column against a tough Blues team in St. Louis tonight.

While the Canucks managed to tie the game up late and salvage a point for the home team, the Canucks were lucky to come away with that. Whether it was “interesting” calls from the officials or a poor start, Vancouver didn’t capitalize against a team below them in the standings. They can send a message tonight against one of the more consistent teams in the league. 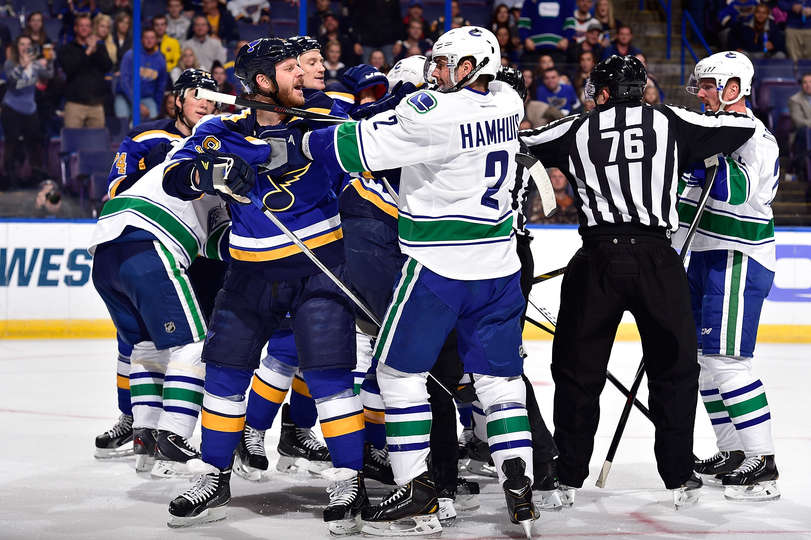 The Blues are currently second in the Central Division and with two games in hand, are just 3 points back from the division leading Nashville Predators. While St. Louis may not be the most exciting team to watch, the tight-checking, low scoring affairs the Blues play tend to have a quasi-playoff feeling to them. Don’t expect anything different tonight.

The signing of Radim Vrbata, while lauded in the Vancouver market, went largely uncelebrated around the rest of the National Hockey League landscape. Granted, it wasn’t the flashiest pickup of the offseason, even if you’re simply looking at the Canucks. However, the production of Vrbata and his ability to finish plays has made him indispensable on a Canucks team that lacked scoring down the stretch and for much of last year.

For so many years, one of the main criticisms surrounding the Sedins hasn’t even been about them. It’s been about management’s inability to saddle them with a pure sniper. Even though the journeyman is not on the top line alongside the twins at the moment, the majority of Vrbata’s points have come while playing with them earlier in the year and on the power play. In any case, he is currently tied for 10th in the league with 30 goals.

It was a nice signing to kick off Jim Benning’s tenure as general manager, and if the Ryan Miller signing has been a B at best, Vrbata is definitely an A, maybe an A+.

The Canucks have played a great deal of back-to-back sets this year. They will finish the year having played on consecutive nights a total of 12 times. While many look at the second of those back-to-back games, the Canucks boast an impressive record in the first half of said sets.

Vancouver is 9-2-0 in the first game of back-to-backs. It may be extra effort to be more prepared and rested for the second game or it may just be dumb luck, but it’s certainly not the quality of competition. The last three in particular were against the Bruins, Rangers, and Kings. Whatever it is, let’s hope the trend continues tonight.

With the Canucks deeply embroiled in a race towards the playoffs, the remaining games become increasingly important until they either clinch or miss out. That much is obvious. Another obvious statement pertains to the schedule for their next five games: it’s going to be tough.

It isn’t simply the teams they’re playing, but the travel schedule and the desperation level of said teams. St. Louis tonight, Nashville tomorrow night, and Chicago on Thursday evening, all on the road. That’s difficult enough, but then they play Winnipeg in the MTS Centre on a Saturday night and face the Los Angeles Kings back home on Monday.

I’m shaking in my boots just thinking about it.

The players will publicly say they’re just taking it one game at a time and I’m sure, to some degree, they are. With the Western Conference stacking up the way that it is, the Canucks will have to put together at least a couple wins over the next week if they want to be in the playoffs.

Will they respond like they did on their California road trip early in the season and their successful Eastern Conference swing in February? Or will they drag through these games like them have in the last two? I suppose we’ll have to wait and see…

With the team almost completely healthy (minus Miller, Richardson, and Kassian), expect the same lineup that started the game against Dallas.

I can’t be the only that has noticed the Canucks’ success in these back-to-back sets, but I’m going to run with it here. Additionally, the Blues are a good team and the Canucks have played well against such teams as of late. Their record against the basement dwellers may leave something to be desired, but that won’t be pertinent until the end of the season when they close out against the Coyotes and Oilers. I’ll take the Canucks in tight one by a score of 2-0.