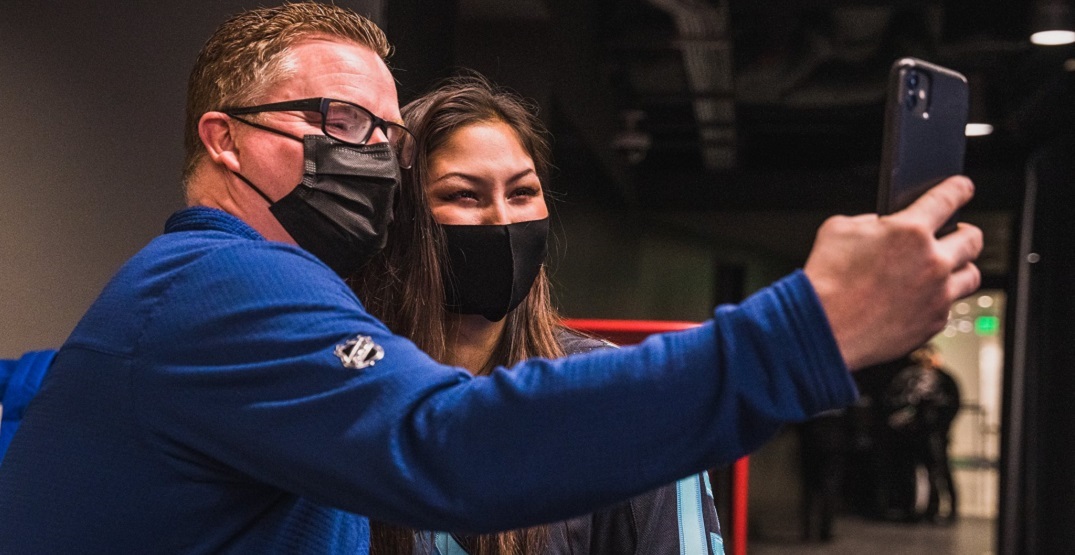 2022 already has its first great hockey story by way of one thoughtful fan who went out of their way to help a Vancouver Canucks staff member.

Yesterday, the Canucks released a statement searching for a fan who’d drawn the attention of the team’s assistant equipment manager, Brian Hamilton, at the Seattle Kraken’s home opener on October 23.

Sitting behind the Canucks bench, the fan used her phone to type out a message to flash to Hamilton, and alerted him of what she thought was a cancerous growth on his neck.

After getting it checked out, Hamilton’s mole was identified as a malignant melanoma and was quickly removed by doctors.

Within a few hours of the statement being posted by the Canucks, Nadia Popovici had been identified through a Facebook group, and the pair was able to connect at last night’s game.

The internet community helped us find Brian's hero, Nadia, and tonight they met in person where he got to express his sincerest thank you to her for saving his life.

A story of human compassion at its finest. pic.twitter.com/66ogo5hB1a

“When you showed me your phone, I was like, ‘Well that’s weird.’ That wasn’t what I was expecting to see,” Hamilton told Popovici. “But it was your effort, and your persistence, and the fact that you just didn’t write it, the way you wrote it, I owe it to this person to get checked.”

“The words out of the doctor’s mouth were if I ignored that for four to five years, I wouldn’t be here,” Hamilton told reporters on Saturday. “She extended my life, she saved my life.”

Popovici also said that she’s a “huge Canucks fan” but has been cheering on the Kraken in their first season with her family’s season tickets behind the visiting bench.

“I was so nervous to bring it up, so I tried to catch you in a moment where there weren’t a lot of people around,” Popovici added.

With Popovici being a prospective medical school student, the Kraken and Canucks came together to award her $10,000 towards her tuition.

Nadia Popovici honored on the Kraken video board where they also announced the Kraken and Canucks would be giving her $10,000 for her college tuition pic.twitter.com/DuRAj93Bfo

“What an amazing way to start my journey to med school,” Popovici said.