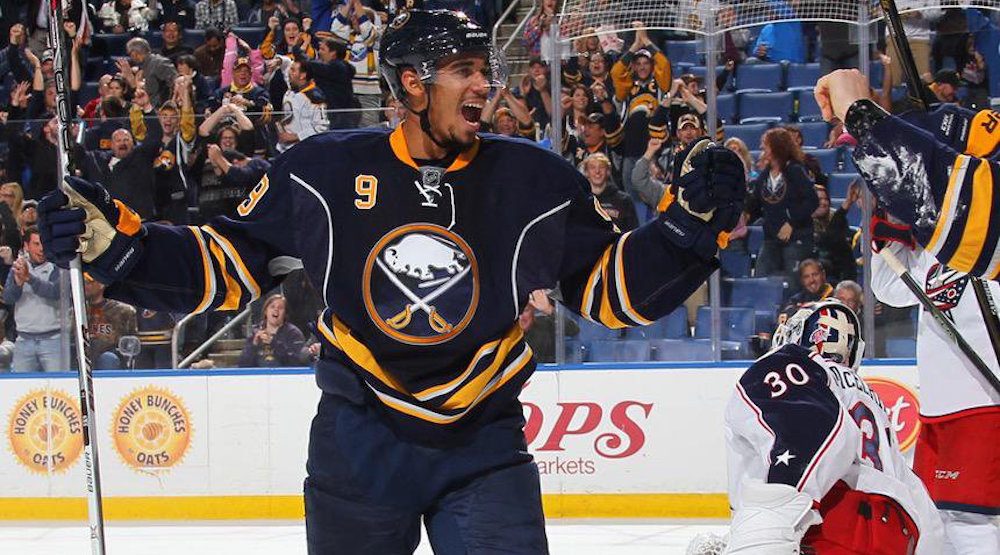 Evander Kane to Vancouver trade rumours, how I’ve missed you. It’s been too long.

The controversial East Vancouver power forward was the subject of trade rumours for much of his time in Winnipeg, but that talk quieted down after he was dealt to the Buffalo Sabres in February of 2015.

Talk of dealing Kane to the Canucks has sparked up again, after TSN’s Bob McKenzie linked the 25-year-old with the Vancouver Canucks on Tuesday’s edition of Insider Trading.

“It’s no secret whatsoever, the number one need of Jim Benning and the Vancouver Canucks is a goal scoring winger,” McKenzie said.

“In the summer [the Canucks] went to the Buffalo Sabres to find out whether Vancouver native Evander Kane might be availability for trade. For a variety of reasons that didn’t materialize at all. But it is believed that Vancouver, among its many other options that it’s considering, is going back to Buffalo and checking on the availability of Evander Kane.”

That quote is a long way from saying that a trade is imminent, but McKenzie is the most respected insider in the game. His reputation suggests that he would not bring up this topic without due cause.

Kane checks a lot of boxes for the Canucks in terms of his play on the ice. He’s big, fast, young, and can score goals. In 65 games with the Sabres last season, he scored 20 goals and added 15 assists.

This year Kane has only appeared in four games due to injury, but it is off-ice issues which are likely to be the biggest red flag for teams looking to acquire him.

Controversy seems to follow Kane, as was the case this summer when he was charged with harassing three women in a Buffalo bar. He was accused of grabbing them by the hair and neck in separate altercations. The charges were dismissed by a judge, contingent on Kane avoiding legal issues for six months.

The judge described Kane’s actions as “arrogant, boorish and surly, but not criminal.”

So Kane is likely to come at a discount, but his value is up for debate.

McKenzie went on to say that Buffalo would likely covet a defenceman in return for Kane, should they decide to deal him.

The Canucks have a few blueliners that could fancy the Sabres’ interest, but how willing GM Jim Benning is to deal them is another story. Any deal involving Chris Tanev would require more than just Kane coming back, and not likely a smart move. Alex Edler could get Buffalo interested, but he has a no-trade clause.

Other defencemen that Buffalo could be interested in include Erik Gudbranson and Ben Hutton.