The NHL’s regular season is long. It’s 82 games and seven months long – and it’s a big commitment to watch every single game.

Enter VcB’s Canucks this week, where we’ll give you a preview of which are “kick the wife/husband/kids/pets out of the house” games, and which are more of the PVRable variety.

We’ll get into this week’s schedule in a second, but first, let’s talk coaching. Following last week’s season-opening loss to the Sharks, half of Canucks Nation was ready to jump off the boat. Nothing’s changed since last year; different coaches, same old Canucks; we demand a RESET – they cried and Twittered.

“We didn’t really play this way for the past couple of years.”

“This is more fun for us. We’ll get more offensive chances, for sure.”

Remember how we used to hate how AV’s Canucks would sit on one goal leads, going into a defensive shell and hoping for the best? Relax people, the offense-suffocating Wicked coach of the West has been banished to the East, and Torts is bringing up-tempo, hard-nosed hockey back to Vancouver.

Now to the matchups. 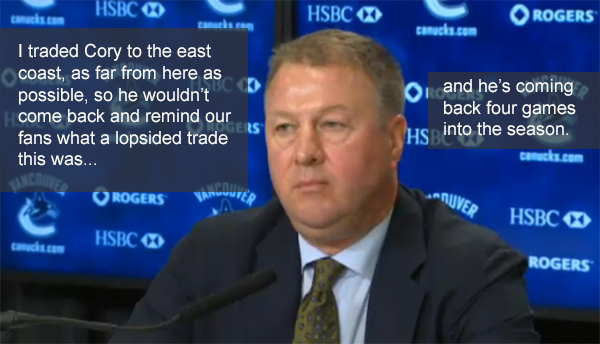 OK, so that’s Gillis. For the fans, this couldn’t be better. Just think of the scenarios. How will the crowd react if either goalie lets in a soft goal? What if one of them gets shelled and gets pulled from the game? Or what if they both stand on their heads making insane save after insane save, leading to an eventual shootout?

My head is spinning.

I give you Exhibit A: 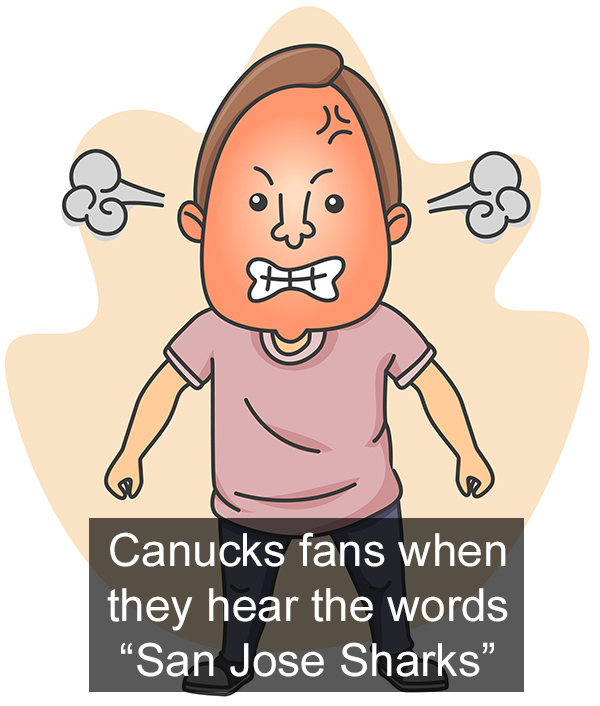 The Canucks have been dominated by the Sharks recently, as you’re well aware. But do yourself a favour and take what the media says with a grain of salt. Before Thursday’s game, you’ll hear that Vancouver has lost 10 straight against San Jose.

First, whoever put this stat together is including two mean-nothing pre-season games for some strange nonsensical reason.

Second, three of the EIGHT (not ten) losses occurred after regulation – one a regular season shootout loss, and two OT losses in last year’s playoffs.

All-in-all, the head-to-head matchup with the Sharks is much closer than “ten straight” or even “eight straight” losses would lead you to believe.

Of course, they’ll need to win Thursday’s game to set the record straight.

Original six team, Canadian matchup, half the stadium filled with Habs jerseys, most of the fans filled with beer because it’s Saturday.

The Canucks will cap off a week of amazing games with this HNIC gem.

In this week’s edition of stats that mean nothing: the Canucks are 1-3 in their last three meetings with the Habs. Last year they didn’t play them, so the record comes from the previous two seasons.

One more thing. If you haven’t seen Canucks Clay’s latest soulful ballad “Against all odds (Luongo’s Lament)” you should watch it now. If you like watching talented people, you’ll enjoy this.