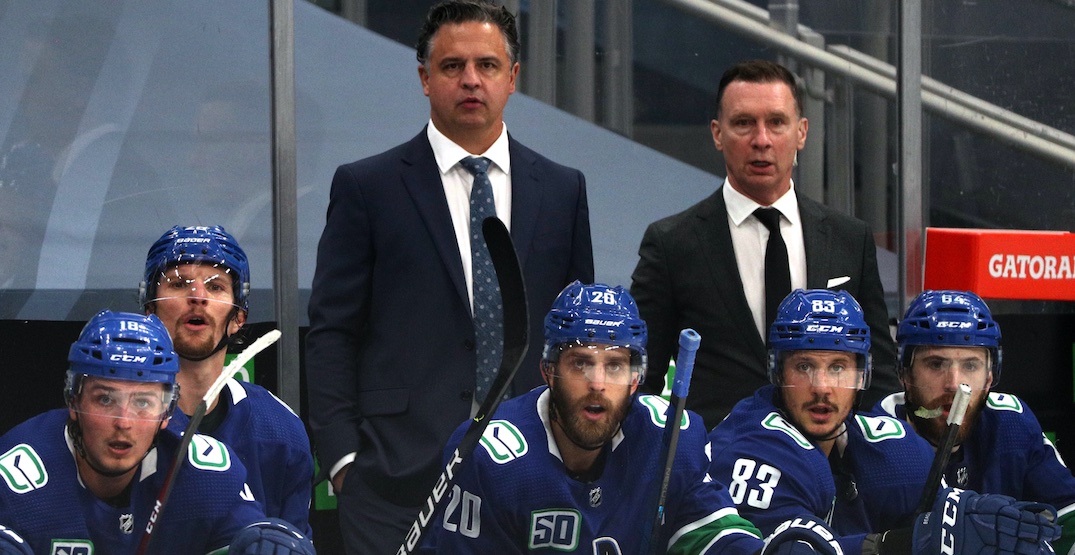 It makes no sense.

With no fans in the NHL playoff bubble, the Vancouver Canucks have drastically different home and away records.

While nobody has the benefit of a hometown crowd to cheer them on, there is still one tangible advantage to being the home team, by virtue of having the last line change.

Except, that hasn’t mattered one iota during the playoffs for the Canucks, who are far better when wearing their road white jerseys this summer.

The Canucks are 7-1 as the “road” team, but a woeful 2-5 when they’re wearing their home blue uniforms.

For a head coach like Travis Green who likes to get his matchups, it must be a mind-boggling stat.

Surely, getting his star players away from the St. Louis Blues’ top defence pairing and two-way beast Ryan O’Reilly should have helped Vancouver win games. But instead, the Canucks went 3-0 against the Cup champs as the road team and 1-2 as the home team.

Against Vegas, Vancouver’s only two wins have come “on the road.”

The Canucks aren’t the only team that has struggled as the “home” team inside the Edmonton and Toronto bubbles, but the drastic nature of their home and away records is still bizarre.

Since the start of the first round on August 10, the “home” team has a 27-37 record. But the discrepancy for the Canucks is next level.

Nobody has more postseason victories on the road than the Canucks this year, while at the same time Vancouver has the worst winning percentage as the home team among the remaining seven playoff teams.

The Canucks will hope it’s merely a statistical aberration because they have home ice disadvantage for tonight’s do-or-die Game 6.

The big story heading into Game 5 was who the Canucks would start in net, with an injury to Jacob Markstrom rumoured.

Heading into Game 6, conventional wisdom is that Thatcher Demko will get a second straight start, given Markstrom’s rumoured groin injury would likely not be healed up in time.

Green openly laughs at reporters trying to get goalie information out of him because like most NHL coaches, he keeps that sort of thing under cover during the playoffs.

“Tune into the game tonight and you’ll see,” Green said this morning, after a question asking if Markstrom is still unfit to play.

But Troy Stecher may have let the cat out of the bag accidentally moments later.

“We have confidence when either goalie’s in net,” Stecher said. “It proved last game, Thatch played unbelievable, he got us a huge win, kept us in it.

“We’re going to need that again out of him tonight.”

DiPietro had been working out in Vancouver, staying ready in case he needed to join the team in Edmonton.

Kielly will be joining the team in Edmonton, according to The Athletic’s Thomas Drance.

With the season on the line, are the Canucks nervous? Everyone but Demko played like they were in Game 5.

But nerves aren’t a bad thing according to Green. In fact, they’re expected.

“Our guys, they want to win,” said Green. “Are they a little bit nervous? Yeah, sure. They should be. I think every team gets a little more as the series goes on… The pressure’s getting higher, so nervousness is alright. That means you care. But also there’s opportunity there and excitement within our group.”

If the Canucks are to win again tonight, it’ll be the first time they’ve staved off elimination twice in a single postseason since 2003 when Markus Naslund and company rattled off three straight wins to beat the St. Louis Blues in seven games.