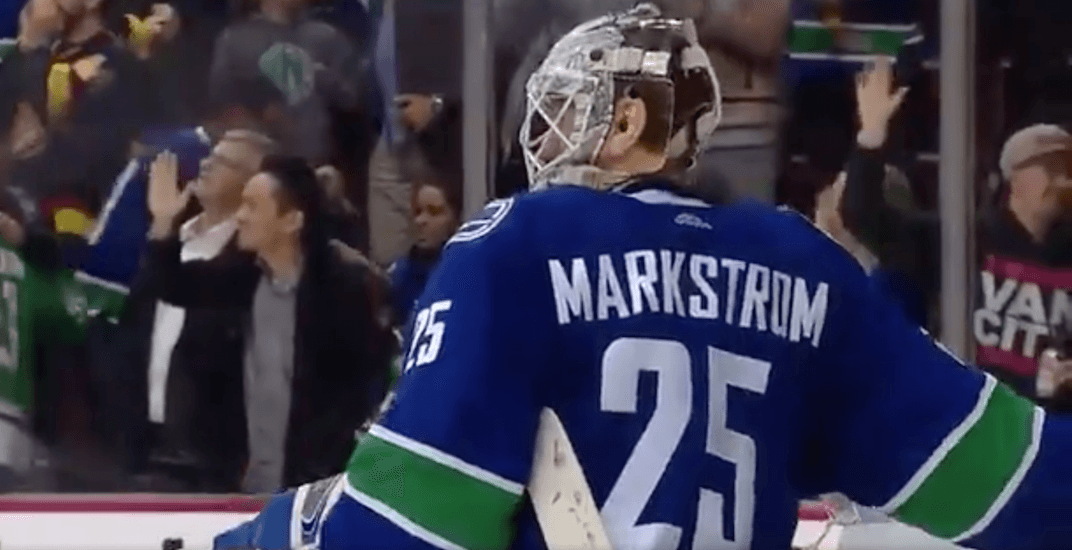 You can afford to sleep through a game here and there when you have the elite talent of Jamie Benn and Tyler Seguin.

Maybe that’s why Monday’s loss against the Stars felt like a win.

The Stars’ power pair came on late in the third and nearly stole the game just like the Canucks did so many times during the days of Sedin domination and even the West Coast Express era.

Sure, the Canucks lost 2-1 in OT on a Alex Radulov goal, but they outplayed Dallas, their goaltending was better, and their fans felt more entertained than they had in the three previous years.

Vancouver led even strength shot attempts 45-25 and they really did dominate. That’s something because just like the Oilers, many have called Dallas a Cup contender.

Did they look like one with that effort against the Canucks?

I’m sure you know this, but just in case – this is Daniel from PITB in his favourite writing hat.

Disclaimer: he’s saying “Uh no”. I thought it was obvious but Rob the Editor Guy believed he was saying “Thank you” and used his power to make me insert this disclaimer.

Anyway, as Bailey would say, here’s what you need to know.

All you have to do to lead off the SixPack is make a play like this. It’s easy.

OK, that play by Markstrom wasn’t easy. It was gutsy and he just barely avoided completely wiping out against the boards.

But the Canucks tied up the game because of him and he was the game’s hero because of it. Oh and this save just minutes earlier.

(Thanks to Ryan Biech for these two gifs)

So here’s the thing: this season Vancouver have both Nilsson and Markstrom locked up to a combined cap hit of $6.1-million. Last season they tied up nearly that amount in Miller alone ($6-million).

Crazy thing is 11 games into it, Vancouver is ranked third in the NHL for goals allowed per game. Third lowest.

They allowed the fifth highest goals/game total in the league.

So was their goaltending better last season?

Lots of season left, obviously, but that’s something to watch.

Oh, and the one goal that beat him Monday? It was pretty much a perfect power play shot off a cross-ice feed.

In case you can’t see it, that was a top corner laser from Seguin.

Want to see the Sedins’ power play unit struggle to get the puck into the offensive zone?

Of course you don’t.

Sorry I have to do this.

This play by Horvat when the “first unit” was on the ice was worse.

They did have some decent chances on the power play, with 13 shots on net through the four man advantages.

Still, Markstrom eventually took matters into his own hands with that play above. He basically said if you guys can’t get the puck into the offensive end, I’ll do it for you.

3. Megna is not Messier

After working hard for the Canucks in many games last season, he started this year in Utica. Finally, with Boeser’s injury, he gets called up.

And the reaction from the fans?

And goldobin doesn’t have speed?

Launch Megna into the sun.

Was the reaction fair?

See, Megna is a decent depth player – he provides a ton of energy, he works hard, he’s strong defensively, yet somehow he’s as popular as Mark Messier in Vancouver.

Andddd I just went with a nuclear bomb when all I needed to do was light a firecracker.

Point is because Willie miscast Megna as a top-six forward for much of last season, even using him with the Sedins, people hate him.

Against the Stars, Megna played least of any player on either team at 4:13.

Now if he’d been playing minutes like those last season, don’t you think fans would be happy for him and his being called up, rather than wanting to launch him into the sun?

4. Imagine it was Willie

There was a shift in the third period where Alex Biega went to Dallas net and nearly scored. About 10 seconds later, he did it again.

Now, despite the fact those were two of the Canucks’ best scoring chances of the game, you have to wonder what Willie’s reaction would’ve been to seeing a defenceman way out of position like that.

Horror? Swaying back and forth and chewing a hole in that gum in his mouth? A year-long trip back to Utica for Biega?

He was Willie D not Willie O

Either way, this game was a perfect example of how a team can be entertaining and win fans over despite not actually winning.

It’s something many smart fans in this market have been clamouring for for years.

On Monday, Seguin and Radulov led the Stars with four shots each. The Canucks, though – they were led by Gagner’s six shots, followed by four each from Vanek and Horvat.

Is there a JPat Jinx? If there is, it might come in handy later.

The SixPack superstar was between Pass it to Bulis’ “Uhhh no” and this little guy:

Still trying to figure out why he stopped clapping, though.

My guess: he saw Megna hopping onto the ice with the top line for a shift halfway through the second period (this did happen).

It’s either that or the green-clad person who walked past the camera was none other than Daniel Wagner with this command for the kid:

I’m thinking it was the Megna shift, though. It’s an educated fanbase, you know.