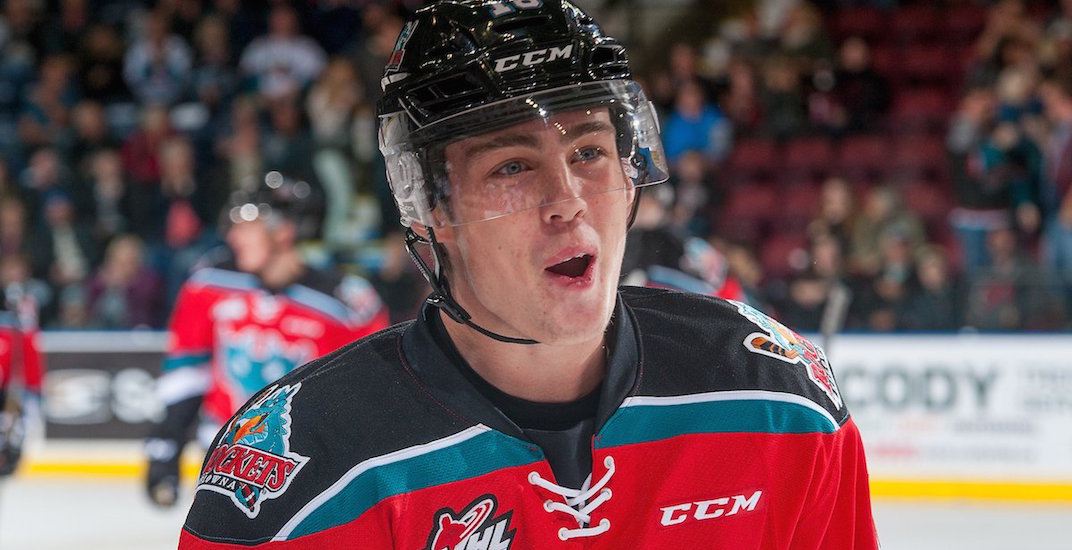 They say nothing is guaranteed in hockey. But if you’ve followed the Vancouver Canucks long enough, you probably know there is one big rule: The Canucks are not allowed to have nice things. The hockey gods are always against Vancouver.

Their prospect pool is coming along nicely.

In 2015, Vancouver selected scoring winger Brock Boeser, who is now a Calder Trophy candidate. In 2016, they added talented blueliner Olli Juolevi, who is rounding out his game playing professionally in Finland. Then, in the past summer, the Canucks picked up offensive dynamo Elias Pettersson, who is currently excelling in the Swedish Hockey League.

Perhaps more importantly, however, it looks like the Canucks have also landed some home runs in the later rounds.

Jacob Markstrom or Anders Nilsson – that is what head coach Travis Green will eventually have to decide. But what if the real long-term solution is already waiting over in Utica?

Thatcher Demko beat veteran Richard Bachman for the starting job in 2016-17 and had a solid first pro season. He appeared in 45 games that year, posting a .907 save percentage. His first five games this season, on the other hand, have been dominant.

Thatcher Demko with the nice save on the one-timer.#Canucks pic.twitter.com/nXmjH937Ac

Demko currently sits at a 4-1-0 record with a .950 save percentage and is suggesting his NHL arrival might be closer than we thought.

Demko looks like the real deal, but he’s not the only goaltending prospect dominating in the Canucks organization.

Memorial Cup champion Michael DiPietro, selected in the third round of the 2017 draft, has started in 15 of the OHL Windsor Spitfires’ 16 games this season, and put up a .930 save percentage. His early highlights of the season: a new career-high of 45 saves and being named to Team OHL for the Canada vs Russia Series.

Olli Juolevi was a controversial pick in 2016, and the fact that sixth-overall pick Matthew Tkachuk recorded 48 points for the Calgary Flames in 2016-17 only made it worse. Fans had high hopes for Juolevi this year, but the Finn had a rather mediocre training camp with the Canucks.

Instead of returning to his junior team in London, Juolevi has made the move back to Finland to round out his game in a professional environment.

The 19-year-old two-way defender has three goals and five points in seven games for TPS, and is getting more and more responsibility. He started out playing a very sheltered role, but is now starting to be used on the power play and penalty kill as well.

Niittymaki : "Olli is getting better every game, he has been a good player for us." #Canucks

Once known as a responsible two-way player with limited offensive upside, the 2015 fifth-rounder has six goals and 13 points in seven games this season. If he continues anywhere near this pace, he will easily beat his already impressive 52-point total from last season.

One of the Canucks’ biggest issues in 2016-17 was scoring, so picking up 87-point scorer Kole Lind in the draft seemed like a smart idea. And so far, it sure looks like it will pay off.

Lind leads the WHL Kelowna Rockets with eight goals and 23 points in 14 games. He is currently tied for 10th in league scoring. Fun fact: he’s two points ahead of Cody Glass, who the Canucks passed over with the fifth overall pick last June.

Kole Lind notches his 8th on the PP and the Rockets hold a 3-0 lead #KELvsPOR #Linder #PainttheRinkPink 🚀🐉 pic.twitter.com/4wp2fDCV1Z

Of course, the Canucks didn’t pass up on Glass for nothing. They selected Swedish centre Elias Pettersson instead, and he currently looks like he might be one of the world’s best prospects outside of the NHL.

At just 18 years old, Pettersson leads the SHL’s Vaxjo Lakers with five goals and 15 points in 13 games, and he ranks fifth in league scoring.

3 goals 5 points for Elias. One of best SHL games I've ever seen from a teenager.

Five of those points came in one game, which included a hat trick, showing how incredibly talented Pettersson really is. With the Sedin twins aging, this is really good news.

The Canucks hope he’s their No. 1 centre of the future.