The Canucks and Sportsnet have released the details of their 2015-16 broadcast schedule.

Every game, including the preseason, will be available on television this season (thankfully there are no mystery games in Stockton, California this year).

The Canucks will be on Hockey Night in Canada 13 times, two fewer than last season. They will also appear on 11 other national broadcasts: 6 times on Wednesday Night Hockey and 5 Sunday games on Hometown Hockey.

All regional games will be on Sportsnet Pacific or Sportsnet Vancouver Hockey. Those are the games where you will hear John Shorthouse, John Garrett and Dan Murphy.

The Canucks open the preseason on September 21 against the San Jose Sharks in a game on Vancouver Island in North Saanich, as part of Kraft Hockeyville.

The regular season will begin where last season ended, in Calgary, on October 7. Vancouver’s home opener will take place three nights later, against Calgary, as the second part of a home-and-home on October 10.

Vancouver’s longest road trip of the season is in November when they play 7 games in 12 days. They play 12 back-to-back situations, including two back-to-back games at home on November 21-22.

Kevin Bieksa will make an emotional return to Vancouver on January 1, while fans will get to chant “Eddie Eddie” again when Eddie Lack returns with the Carolina Hurricanes on January 15.

Your first chance to see Connor McDavid at Rogers Arena will be on October 18, while Sidney Crosby visits November 4. The Stanley Cup champion Chicago Blackhawks will play in Vancouver twice this year, on November 21 and March 27. The Boston Bruins will renew hostilities on December 5. The Toronto Maple Leafs will make their lone visit to Rogers Arena on February 13 (at 4:00 pm, naturally). 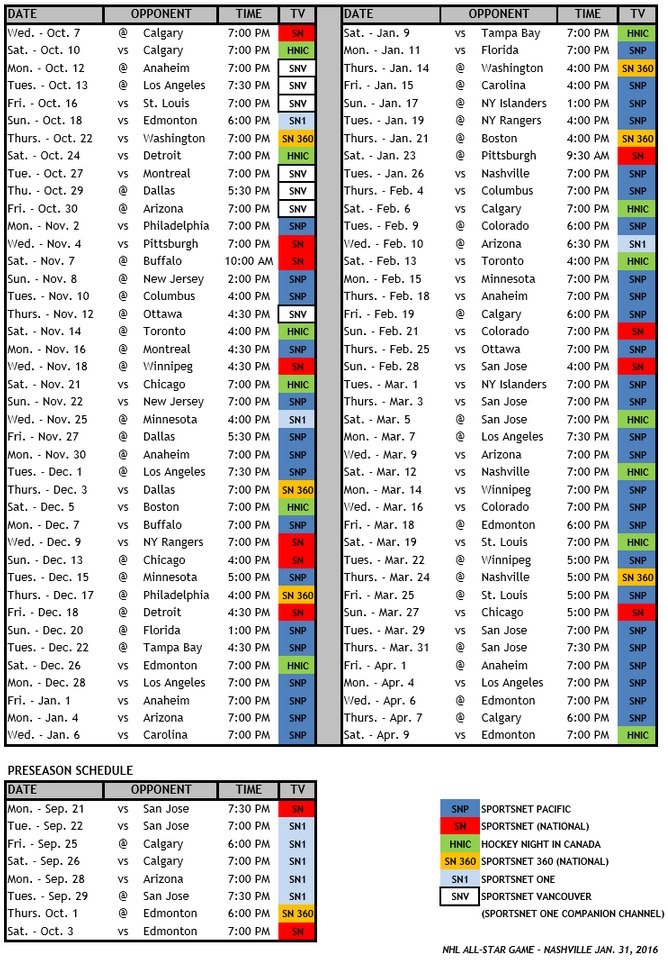