When did it become a choice between developing young players and winning?

Saturday night against the Red Wings Vancouver almost did both. Up 2-0 going into the third period, it looked like coach Desjardins wanted to play his youngsters. Jared McCann was getting shifts until the end of the game – course it helped he was playing between the coach’s golden children, Dorsett and Prust.

More on that below.

Willie was asked about what he thought about the upcoming schedule yesterday – Detroit, Montreal and Dallas loomed.

His response: “It’s probably the same as when I saw L.A, Anaheim, and St. Louis. It’s always the same, you’re always playing good teams and every night you’ve got to find a way to beat that team… Detroit’s good, they’ve got lots of speed, they’re hungry, so we’re going to have to be prepared for them.”

With Vancouver playing a Detroit team missing Mike Green and Kyle Quincey – two key defensemen – on the second half of a back-to-back, at the very end of a cross-country four-game road-trip, Desjardins couldn’t have been serious.

It should’ve been guaranteed-win night at the Rog.

Then they woke up.

Somehow the Canucks gave up the lead and lost 3-2 in overtime, making their home record a frightening 0-2-3.

1. McCann and Virtanen have to play

The idea, long-term, is for the Canucks to find and develop a group of young players that will push the veterans and eventually take over for them – a group who will add speed, energy and hopefully some secondary scoring behind the Sedins, Vrbata, Burrows and the rest.

Canucks fans, who emerged from the summer full of despair and anger, became excited through pre-season and the first few games of the year.

They had thought Jake Virtanen was the only fresh face who’d crack the lineup, but somehow Jared McCann and Ben Hutton emerged as well.

All of a sudden fans felt perhaps the team could achieve more than being bottom dwellers, as ESPN predicted prior to the season.

What the team needs to realize is if they are to make the playoffs, or even have success against the league’s better teams, they can’t rely on secondary scoring from Derek Dorsett and Brandon Prust (who were on the ice for the last shift at the end of regulation time, incidentally).

Jannik Hansen and Chris Higgins will chip in here and there (and they’ll also miss here and there), but Vancouver needs to have some true offensive weapons threatening to strike.

McCann has now played 6 games and Virtanen 5, meaning they have 3 and 4 left to show if they can fill the gap. If they can’t, the Canucks chances at the playoffs will plummet – they’ll be holding on while the young guys develop.

Against the Red Wings they did play in the third, but not a lot. Virtanen played under six minutes in the game, Baertschi under seven, and McCann nearly 12.

Before getting too upset, do note there were three penalties in the third, and none of the three play special teams. Desjardins gave Virtanen and Baertschi four third-period shifts and McCann had six.

And in case you’re wondering why they need the young guys, it’s because they can do things like this.

2. Coach does have a plan

Before you get too anxious or worried about the kids’ playing time, Desjardins elaborated on his plans for them on TSN 1040 Friday.

“Fans watch them and wonder how they got played (against Washington), but you’ve got to work them in in the right way,” he said. “You can’t put them in spots where they may not succeed because that’s tough on their confidence. It’s no different than we did with Bo last year – in his first 8-10 games he averaged more than 10 minutes once. These guys are averaging more than Bo did probably at the start of his career.”

Willie was asked if he’s worried if playing the veterans will tire them out over the season.

“That’s what you have to do to develop the young guys,” he said. “Do we not do that and send them home? Take them right out of the lineup? That’s your option. Or do you think we find ways to put them in the lineup when we need them and bring them along?”

“I’ve always liked to play four lines, but I think this is a unique situation. We want to bring these guys along. We see these guys as being a real big part of our future and we want to try to bring them along as best we can this year.”

Despite their lack of playing time, you have to see some positives here. From what he’s saying, it sounds like Desjardins plans to have both rookie forwards here past their nine-game window, for the entire season. Need more? He was asked if he thinks the vets’ll get fatigued.

“No because the young guys are going to get more experience as we go and they’ll log more ice time as we go. There are some games where they’ll come back (meaning where their minutes will be dialed back). I think they’ll just get better and I’ll be able to use them in more and more situations as we go forward.”

Desjardins was also asked if he’d consider splitting the Sedins to spread the team’s scoring out. He had a good answer to that one.

“I think that makes sense, but with almost every other player but the twins. I think they use each other so well. If you look at our scoring chances over the first games, those two are the highest we have. It doesn’t matter who you play them with, they still produce those numbers… I think it’s because they’re together and they use each other so well.”

Want to see them use each other well?

That’s Daniel taking a pass from Henrik and going between his own legs in his attempt to score.

The Sedins were a dominant force once again, leading Canucks forwards in corsi (all situations). Daniel led the team in shots, with four, but he was completely out of luck when it came to bounces.

Daniel’s luck has been so bad this season that he has two goals despite leading the team in shots with 36 – ahead of even Vrbata’s 32.

He’s getting desperate for a goal too, as you see here.

Yannick Weber played great in his return… for the most part.

He led Canucks skaters in corsi (all situations) at plus-12, and was behind only Hamhuis and Tanev in even strength corsi.

Notice that Hamhuis, who’s been at the bottom of the corsi charts in most games so far, was at the top with Weber by his side.

Weber was also good on the power play – providing a threat from the point that Edler just can’t.

One interesting note: despite playing two defencemen on the first unit – Sutter’s been pulled – they still left one defenceman alone on the point while all other players snuck in. 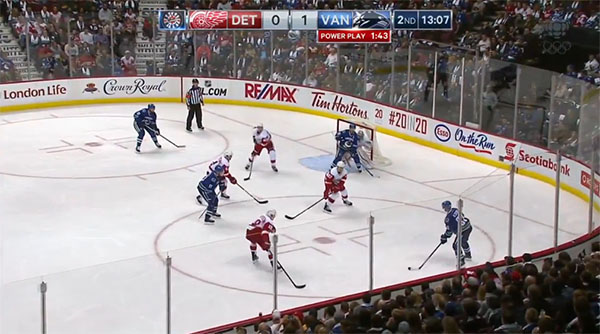 You can’t see Weber in the picture because he’s so far back, but you can see what Edler sneaking in does to the penalty killers. They have to collapse to cover the four players in close – leaving Weber and his deadly one timer wide open at the point.

Weber had some lows too. Here he is trying to fire a breakout pass early in the game.

If you can’t see, he passed the puck right into the forward coming at him. It could’ve been really ugly.

Surprisingly, he was on the ice for Vancouver’s very next shift, which confirms that Willie really is the most mysterious man in the universe.

In overtime, Weber led a rise-from-your-seats rush up the ice, that should silence any talk about the team needing Bartkowski’s mobility.

There are some seriously mixed feelings on Sven Baertschi’s early performances. A lot of statsheads will tell you he’s had great numbers, meaning he’s been on the ice for many more scoring chances for than against the Canucks.

And then there’s the opposing crowd.

@omarcanuck another period closer to the end of the Baertschi era. Haven't heard dudes name once. Is less noticeable then Jensen

I don’t quite agree – Baertschi’s very noticeable. His puck skills are undeniable.

But watching him play in person, there’s one other undeniable fact – he rarely wins a puck battle. Here’s an example.

He takes the puck in the neutral zone, makes a bad pass, and then does a fly-by instead of getting the puck back.

Mike’s back in the SixPack (despite the stock pic he used)… he was missed.

@omarcanuck if you mean 8 rinks? Then yes.

Paul Romanuk was singing circus music after one Sedin chance early in the game:

I think that circus music is Sbisa's goal song. https://t.co/3iXZQow6DG

This is just plain mean:

@omarcanuck i don't like kyprios because he's a non-thinking analyst

And after I tweeted something about Willie being unpredictable, I got this response. If you don’t get this, you’re probably better off: