The Canucks built themselves a lead, only to falter as the game wore on. Unlike other games, however, the Canucks managed to hold on, and came away with a 4-3 win. They won even with Richard Bachman getting his first start of the year, thus proving Ryan Miller was the problem all along. (I kid)

The biggest questions, though, all revolve around the kids these days, so let’s dive right into this game, shall we?

Obviously Jared McCann won’t keep up this shooting percentage (floating above 30%), but he’s scoring goals in a variety of ways.

He’s getting garbage goals by going to the proverbial “right areas” of the ice.

He’s getting nice snipe goals, and all of the talk is about how hard and deceptive his wrist shot is.

He also busted out the slick goal you see tonight, where he had the patience to wait out the goalie to get the shot he wanted off.

So we stand now with McCann at 9 games played. If he plays that 10th game, it kills off a year of his cheap entry level contract. Part of you wants to hold off on that and send him back to junior, and keep him as cheap as possible as long as you can. He would be like that best friend in your life you might want to date one day, but you know, you’re just not ready for it yet.

That being said, he leads the team in goals. Again, it’s early in the season (as evidenced by Dale Weise’s hat trick tonight in Calgary, equaling him with five goals on the year with McCann) but if the mantra from management is true that if you earn a spot, you’ll keep it regardless of your age, he kind of has to stay.

Now, the theory is that management is concerned his young frail body won’t survive the mantastic environment of the NHL. Gilbert Brule has shown how that can be true. In fact, McCann got taken down heavily in tonight’s game and let out a little yelp, and was seen getting some attention on his back later on the bench.

Still, the city is itching for a youth movement, and with McCann looking like the best young goal scorer on the team, it’s hard to turn away from that. He’s helping you win games, which is the point of this whole thing, right?

Ah, Luca, Luca, Luca. He has become quite a polarizing figure in the city. Management seemingly loves him. Many of the fans do not, sometimes to comedic levels. Some fans defend him, perhaps upset at seeing him become the whipping boy.

Tonight was a perfect example of why Luca can generate that kind of division.

On one hand, he had two points on the night. Two assists, three hits, 16 minutes of ice time.

On the other hand, he didn’t look particularly good on two of the Coyotes goals. His assists were secondary assists, and that’s not to knock his accomplishments down for the hell of it, but they weren’t the kind of assists that blew your mind. His even strength Corsi was a team worst -11 (though to be fair the Canucks played defensively and had ‘score effects’ all up in their grill for most of the game).

So for example, on the Coyotes first goal:

Sbisa doesn’t control the stick of Domi and ends up whiffing at the puck.

On the second goal:

He doesn’t box out his guy, and probably screened his goalie.

I don’t want to make it seem like I am making a Sbisa Zapruder film (back, and to the left), but I just want to highlight why people get frustrated by his play.

I’ll always remember Brad May talking about a guy taking a run at him, and not being mad about it. “You live by the sword, you die by the sword.” Brad’s reasoning being he always tried to hit everyone, so it only makes sense to not get angry when people try and return the favour.

Jake Virtanen lives on that bloody sword. He hands out hits like it’s Halloween, and his body is one giant treat.

As a result, he is going to piss some people off. Tonight, he was dropped twice, and was slow to get up both times. The second time, however, looked far worse. It wasn’t a big hit, but a sneaky Homer Simpson “I’m just going to cross-check in front of me, so if you happen to walk in my way, that’s your own fault” type of hit.

So I don’t know how bad he hit his head and/or chin. The hit itself is odd in that he acts like he was tasered by the cross-check. Upon the stick touching his back, he almost goes limp, and drops to the ice and flops, like he’s trying to get a call. That being said, nobody tries to get a call by letting their head hit the ice flush, so I have no idea what’s going on. It could have just knocked the wind out of him, and before he knew it, he was staring at the ice.

It’s a weird play, and hopefully Jake is ok.

How did the young guys do under noted youth luddite Coach Desjardins?

Not quite the thirteen minute mark, but better than under ten. It’s still readily apparent the coach trusts Dorsett and Cracknell more. Baby steps though, baby steps.

WD all of a sudden saying it's a possibility to have McCann and maybe even Baertschi on the PP soon.

Gaunce got his first goal as a Canuck, and it was about as gritty as most of his goals have been during Canucks preseasons:

Gaunce, who was of course drafted as a centre but has been converted to the wing, has been a pleasant surprise this year. His skating has improved, and he is a big body on the ice that doesn’t dislocate his shoulder on faceoffs like Guillaume Desbiens used to.

For a team that struggled for years with their fourth line (Tanner Glass stood above the competition which is….not good), it’s nice to see young guys like this that are a bit more complete in their game, try and make the team.

Also, he always looks vaguely crazy in all his pictures, and he seems very physically mature, which is a big plus. 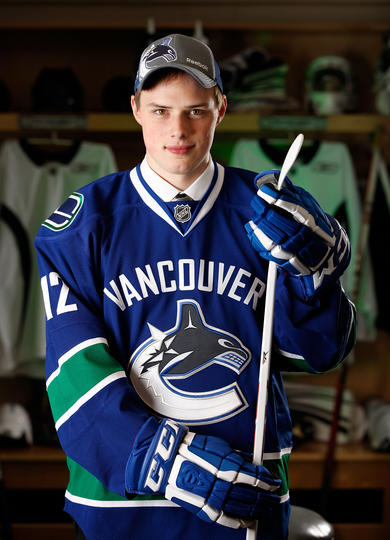 It’s a Friday night game, a day before Halloween, against the Coyotes. These are the games we bust out the Dan Murphy gifs.

First up, Daniel Sedin tries to get sneaky on ol’ Murph by ripping off some tape from his stick before the camera starts rolling. He isn’t fast enough, but still plays it off like nothing happened.

Daniel Sedin caught ripping tape off his stick, tries to play it off all cool.

Then Dan Murphy has to deal with another quick camera cut, but he’s also ice cold, and nails out a cool, calm, collected smile to wash over the fact he wasn’t ready yet.

.@sportsnetmurph with the veteran know how of how to recover from a quick cut. Smile and charm the audience. pic.twitter.com/5k7rR1RNAo

Sometimes the best action is during the intermissions.